It’s been a rough week in the market, to say the least. In light of that fact, we thought we would send out this update ahead of our normal Monday post, looking here at some new numbers and where we think things might be headed after we all take a breath over the weekend. Here are the updated numbers on the Coronavirus. Since Monday, there have been 4,164 new cases, 244 new deaths and 11,604 people have recovered. Almost three times as many people recovered from the virus than contracted it since MONDAY. Again, I’m not trying to downplay the virus, but just as the mass hysteria has started to grip the world, national health agencies are now “taking it seriously” and the WHO upgraded it to “very high” risk across the world.

As we are now seeing Millennial traders buying “plague” stocks, shortly after getting smacked on their previous manic trade of Virgin Galactic. Seems like this down leg has about run its course. Let’s look at why we believe that (a look at history). 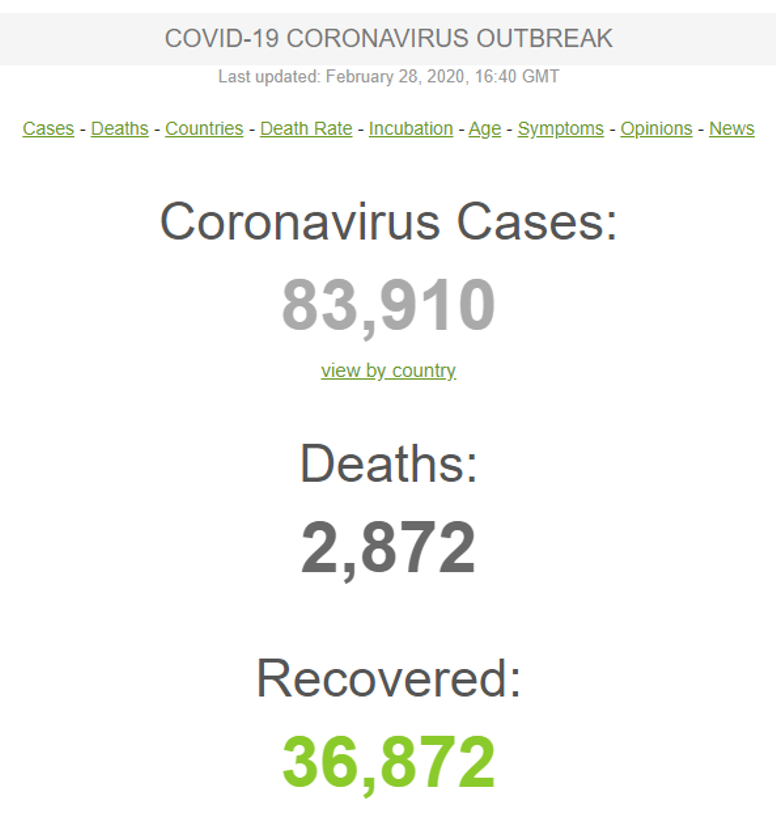 The volatility index (below) is a great contrarian indicator of the market. When the VIX gets above 40, that typically marks at least a short-term bottom in the market. We are at similar levels to 2009 and 2011, and even going back to the 2002 bear market. This represents a rubber band. Two things can happen to this rubber band at this point. It can either snap back or break. It’s never broken before, but maybe this is the first time. More on that later.

The spreads on high yield bonds have finally started to tick higher. That is good, since we don’t believe the high-yield market has been pricing risk appropriately for a while now. Is it at extremes? Not even close. More work to do there.

Let’s take a look at the NDR daily sentiment index. We have been saying that this was elevated for a while now. How quickly things can change. We have now clearly gotten into the “extreme pessimism” area. Can it go lower? Of course it can, but it’s getting to the point where it doesn’t get too much more negative.

Let’s take a look at the S&P 500 as a proxy for the market. You can see in the chart below that we are very oversold on a short-term basis and have used up most of the fuel in the short run to sell off stocks. While most of us are linear thinkers, meaning we look at what has happened most recently and extrapolate that into the future, markets typically don’t go straight down or straight up. They can go one direction or another over a short period of time, but then that fuel is used up and it must take a break before it either continues down or reverses in the other direction.

Remember, most of us are “long-term” investors, which in today’s markets is about 12 nanoseconds. Kidding aside, most of us have years to decades with our money and making these decisions based on short-term swings is usually a bad idea.

As we have said in the past, coming into this swift downturn we had extra cash, a larger allocation to bonds, and gold and silver as a hedge against a bad market event. Add to this that earlier this week we put in a hedged equity ETF that limits our downside in that portion of the portfolio to about 5%, while still allowing us to participate on the upside should the market turn around (see our Nov 26, 2019 blog post for more on how these products work). This was done not as a panic move, but something over a period of months as our model had been showing signs of excess and euphoria. I guess we can say we don’t have euphoria anymore. 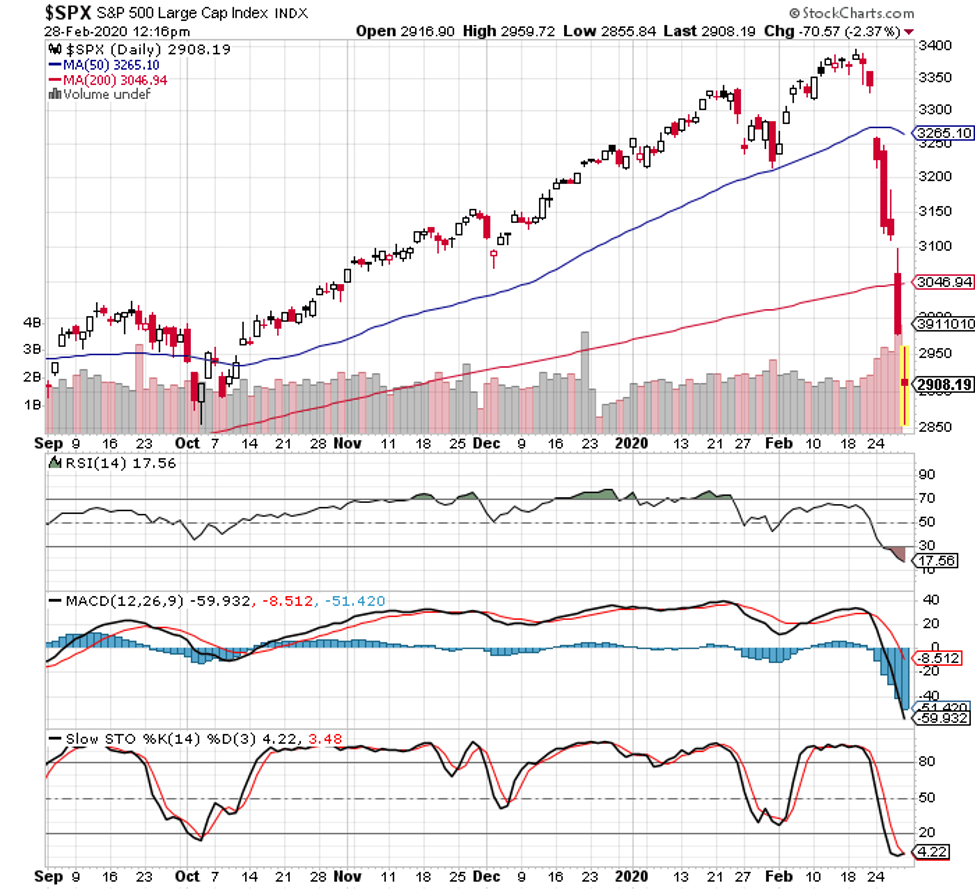 So what’s the bottom line?

Ultimately, the market will also move on, but from a much more attractive price than it had been previously. Is a 20% bear market possible? Of course it is. We should get one every 5-7 years and it’s technically been 11 years since the last one (though we’ve arguably had a couple in the interim, including most recently in December 2018)

Well, what about your model? I thought that would keep us from losing money? Let’s be clear, we don’t have a crystal ball, nor do we know the future. We do look for trends of intermediate to longer term to identify favored and non-favored asset classes. There isn’t a bell that rings that says either time to buy or time to sell. We look at our indicators and they give us levels that have historically been good buying or good selling points, but it takes courage to buy/sell during those times, as you really don’t know the outcome of those buys/sells until well after you push the button.

So has anything changed for us/you? Only if you get panicked out of the market. Otherwise, we made moves starting months ago in anticipation of some unknown event. It turns out that “unknown” event was COVID-19, aka the novel coronavirus. It’s scary, especially if you live in Asia, but not all that lethal when comparing it to other diseases or viruses.

Where do the wheels fall off the bus? When people stop living their lives, stop doing what they otherwise might do because they are scared. People stop spending money, businesses make less money, they hire less or lay people off because they are less profitable. When people get laid off, they spend less on things and the spiral becomes self-fulfilling. Could that happen, absolutely. Should it?  Not in my opinion, but I don’t get to make decisions for every person on the planet (thankfully).

On a side note, if anyone has a mortgage over 3.5%, you may want to get your information together to refinance your mortgage. This is one of the benefits (if you can call it that) of what’s going on in the market. Take a look at the chart below. The market is expecting between 2-4 cuts in short-term interest rates this year. 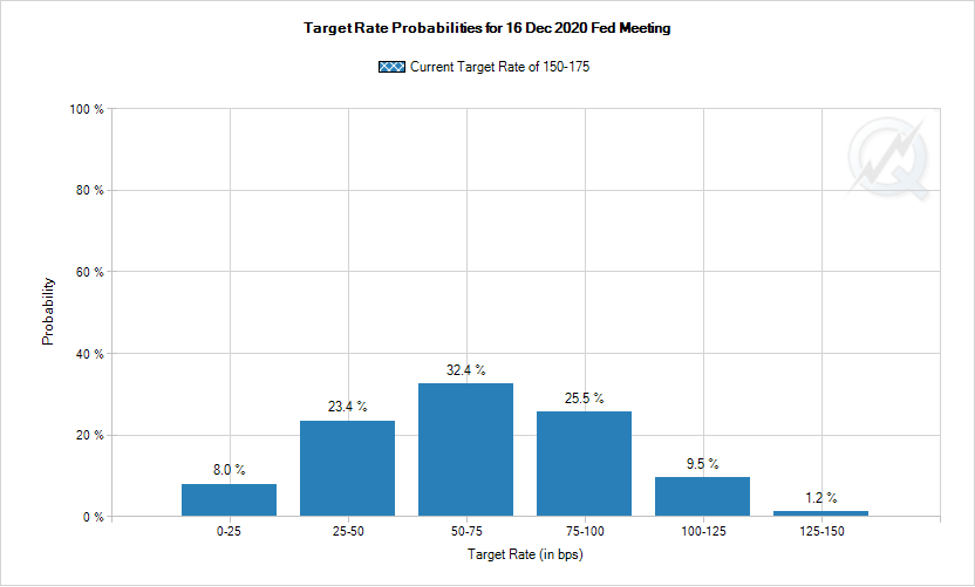 We will be cautious as we have been and look for opportunities. We still remain cautiously optimistic about the longer term and think there is more room to go in this cycle (after this pullback). If you’ve made it this far, thank you for reading. We wish you a wonderful weekend, and join with you in hoping next week looks a lot different from this past week in the markets. Regardless, we’re with you each step of the way, and thank you for your trust.