With so many renderings of what the new Tesla truck was going to look like, it was easy to get excited about it. This first image is a pretty cool “futuristic” looking truck that could be very functional and good for the environment.

And this is instead what we got…. 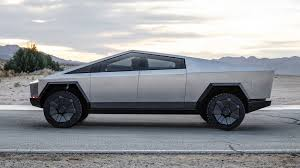 Now don’t get me wrong, 500 miles on a charge, and a tailgate that has a ramp built in are pretty interesting features. Add to that, that you can beat a Porsche 911 in a 1/4 mile drag race and you’ve got something, not to mention no more door dings at your local grocery store. I’m just not sure I can bring myself to climb into a tetrahedron (liberal use of the word for all you geometry folks out there) every morning. Back to work Elon!...and while you’re at it, Andrew would like you to work on your first minivan!

The news headline that caught my attention this morning was hedge fund manager Ray Dalio betting $1.5B (yes Billion) that the market will go down over a set period of time.  That’s a pretty small bet for a $150B fund, but still meaningful in absolute dollars. Reports are now out saying that he refutes these rumors, but let’s run with the idea for the sake of argument.

If the rumors are in fact true, they reflect one of the world’s most successful investors taking a position on where he believes markets are heading. This brings us to a new topic we want to explore with you. There are new ETFs out that are now being call ‘targeted outcome’ portfolios that give you set outcomes based on the S&P 500 index. Why the S&P 500? Because it’s the most liquid index in the world and the easiest to structure these outcomes. We’ll get to how they work in a second, but first a little background on why they exist and are worth exploring…

There is usually a cap on the upside in exchange for some downside protection. This is true in anything, investing not being an exception. Removing your shoes at the airport, locks on your door, traffic lights…they all represent a barrier on total freedom and an increase in inconvenience in exchange for increased security and surety. When it comes to investments, you must have a viewpoint that you want to express, whether it is as simple as the market going one direction or another, or a certain sector going up or even an individual company moving based on specific fundamentals. Each of those viewpoints have their own idiosyncrasies and challenges, but you must have a view – however blunt or nuanced it might be.

We have mentioned for quite some time that, even through much of the politics, trade wars, global slowdown fears (and realities), we believe the market’s path of least resistance is higher, not lower.  We have also hedged that by saying that we recognize all those issues as being a possible major issue should they not resolve favorably. We are 10 years into a typical 5-7 year cycle, and while it’s true that bull markets don’t die of old age, we also must recognize that the market doesn’t have the ability late in the cycle to greatly outperform, as much of the fuel from the last recession has been used (albeit at a slower pace than has traditional been used).

Given that, I wanted to expose you to ‘targeted outcome’ portfolios. Now for that “how they work” question…

There are a couple main types of outcomes. They are mostly a tradeoff between an upside cap and downside buffer. On the left chart below, you have a 9% cap and a 10% buffer over a 1-year period, while the right chart is a 7% cap and 25% buffer. The left outcome is pretty straightforward. You get upside in the market until the cap (9%), and if the market is down 10% the portfolio would be flat. Dow more than 10% and the portfolio starts to go down, but trails by the 10% buffer (i.e., if the market is down 17%, you are only down 7%).

The portfolio on the right is the same on the upside to the cap (7%), but the portfolio takes the first 5% on the downside and then doesn’t go down for the next 25%.

If your view was that between now and the Presidential election, something could go sideways and the market could be down greater than 15%, you would want to buy the right-hand portfolio above. If however you thought the downside was limited and you wanted more upside, you would buy the left portfolio. Let’s put a few numbers out there to chew on…

That’s all good for relatively normal markets, but what happens when the markets are either up really big or down really big? This is where your viewpoint becomes important. If you think the market has a chance to be down 30%, Portfolio 1 would be down 20% while Portfolio 2 would only be down 5%. If you thought the market would be up 20% or more, you would obviously be capped at those percentages above and miss out on any more of the upside.

Now the question becomes what is your view of significant upside versus significant downside?  While we are cautiously optimistic, we also recognize that there could be significant disruptions in the markets at some point in the next year. If that view is correct, having a buffer to the downside would be effective, so long as the markets didn’t go tearing off into the stratosphere (which is a possibility, not likely a probability).

Sorry if this was confusing, but if you need clarification on anything, let any of know and we can answer your questions.

We still remain cautiously optimistic and expect the market to continue to new highs into the end of the year and first quarter of next year. With that, we’ll wish you all a very Happy Thanksgiving and wrap this thing up. We hope this hasn’t been more powerful than a big helping of turkey in putting you to sleep!