Let’s take a look at a couple new charts and a couple oldie but goodies. Maybe we can see if anything behind the scenes is changing and potentially look into our future. Our first chart is the Federal Debt held by the public as a percentage of US GDP. As you can see, we are at the same level as World War II levels, which could make some sense since we are “fighting a war” as we speak. That being said, that debt will have to be paid back, unless money doesn’t matter. 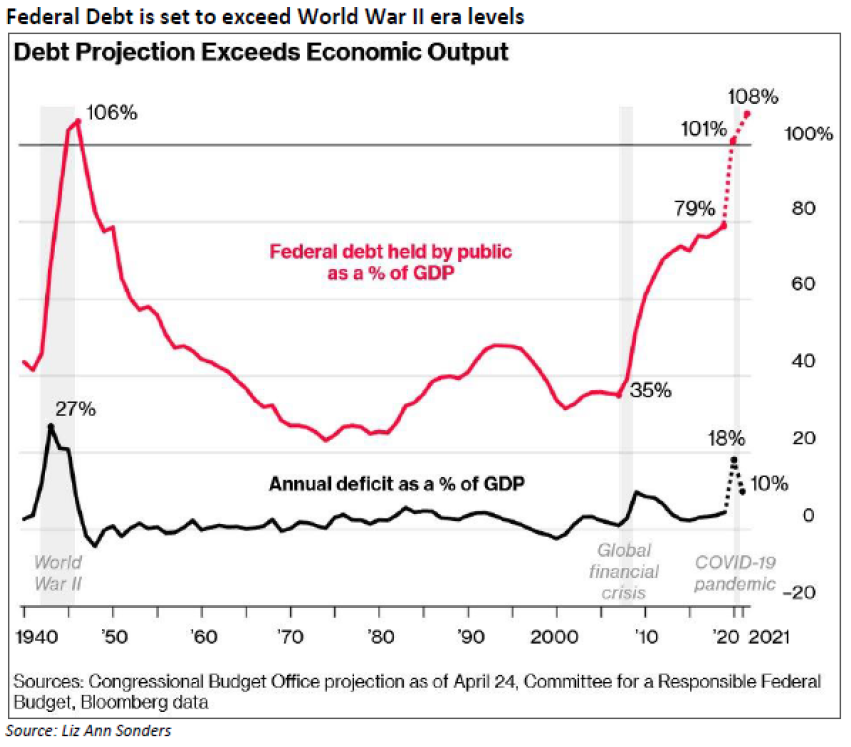 As the Federal Government has spent trillions of dollars trying to help keep the economy afloat and helping those people most affected by the virus survive (and more spending bills look certain to be enacted), many are looking at the obvious effect of all that printing of money potentially causing inflation. We even discussed this a couple weeks back. One of those metrics of inflation prediction is the price of gold, a hard asset that acts as one of the best hedges to inflation. As you can see in the next chart, that price has broken above $2,000 per ounce – an all-time record. 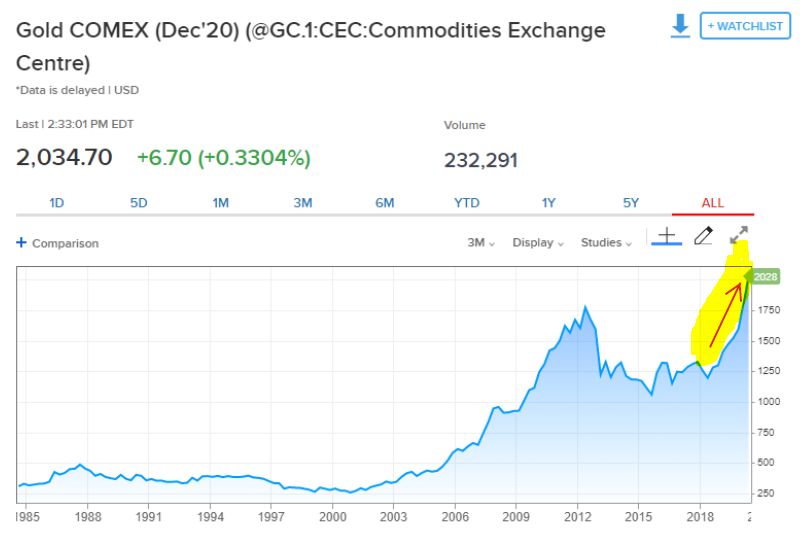 If you remember the last few weeks, I said we don’t expect inflation in the short run, but over the intermediate to longer-term we think we could see it meaningfully return to the fore. That said, this is not a foregone conclusion, and today we will look at why inflation may actually remain muted and why we don’t want to load all our eggs in the “inflation is certain” basket. Let’s take a look at one way that inflation is measured and look at the inputs of that inflation.

The Quantity Theory of Money states the following:

So if the theory holds, the high rates of growth in both money supply and velocity of money would produce high economic growth and/or high inflation.

We know that we have had subpar inflation according to the FED’s measurements (as they have been unsuccessfully trying to achieve 2% inflation for years), while the growth rate of output has been reasonable. So what gives? Let’s take a look at the two components that are at the heart of this equation. The first is money supply. You can see that the money supply has been increasing (as it should, based on the equation in a growing economy), but the rate of growth the last 20 years has been much higher than prior to the late 90’s (coincidence?...I think not). 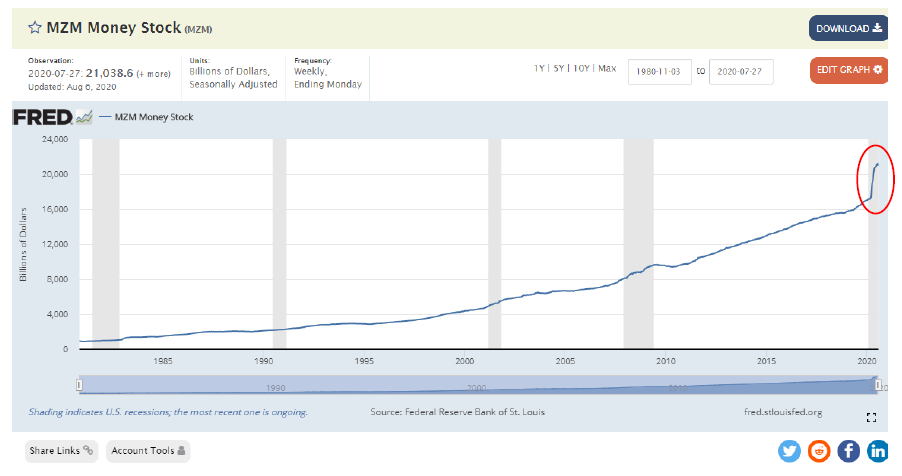 Next is the velocity of money (how many times that dollar turns over). Oddly enough, that has been going down for 40 years now. It is now setting new lows (at least as far as the FED chart goes back). 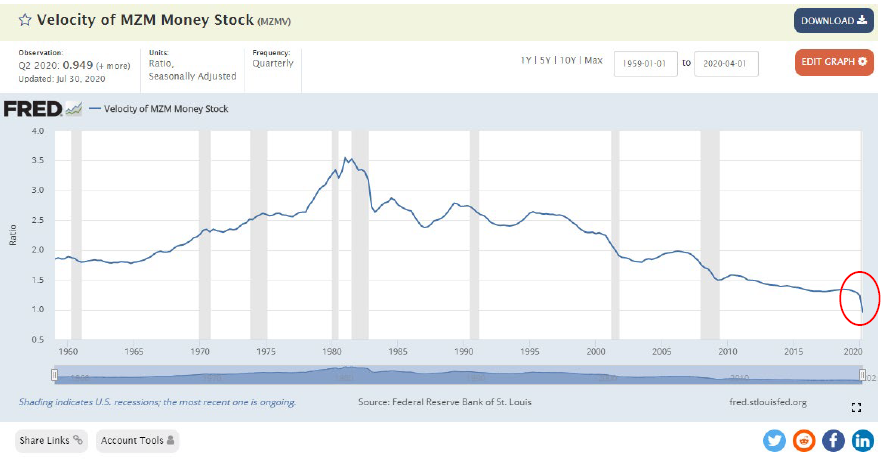 So if we go back to our equation, you can see that if our money supply is going straight up and our velocity is going straight down, they effectively cancel each other out. It is the reason we have seen inflation rates come down over the last 40 years.

Q: When will we see inflation?

A: When we start to see a reversal of the velocity of money (aka, an increase…or even a simple leveling!).

Simple enough, but the trick to all this is it will be difficult to get a reversal in velocity of money when our debt levels are so high. But Chris, you just showed our debt levels were at these same levels after WWII and they came all the way down to manageable levels by “growing our way out of it.” True, but there is one thing that happened then that doesn’t appear likely to happen now. That is another wave of children (barring a “quarantine baby boom”). According to the recently released report from NVSS, the total fertility rate is 1.7, which is lower than the 2.1 replacement rate needed for a growing population (and has been trending lower over decades, so this is not some recent statistical anomaly). As we all know (and Andrew will attest if you’re doubting), it is expensive to raise children and without a surge in babies, it seems unlikely that we will have the need in the economy to spend like we did in the 50s and 60s leading up to the peak in inflation in the 70s and early 80s.

If we want to see our future, all we need to do is look at the past 30 years in Japan. You can see that since the early 90s their GDP has mostly flatlined between 0-2% per year, even though they have been flooding their economy with money (like we are now). Despite this flood, I would assume that their velocity of money has been going down, just like in the US (though I don’t have the data to definitively prove this assumption). Their fertility rate has been quite low as well. 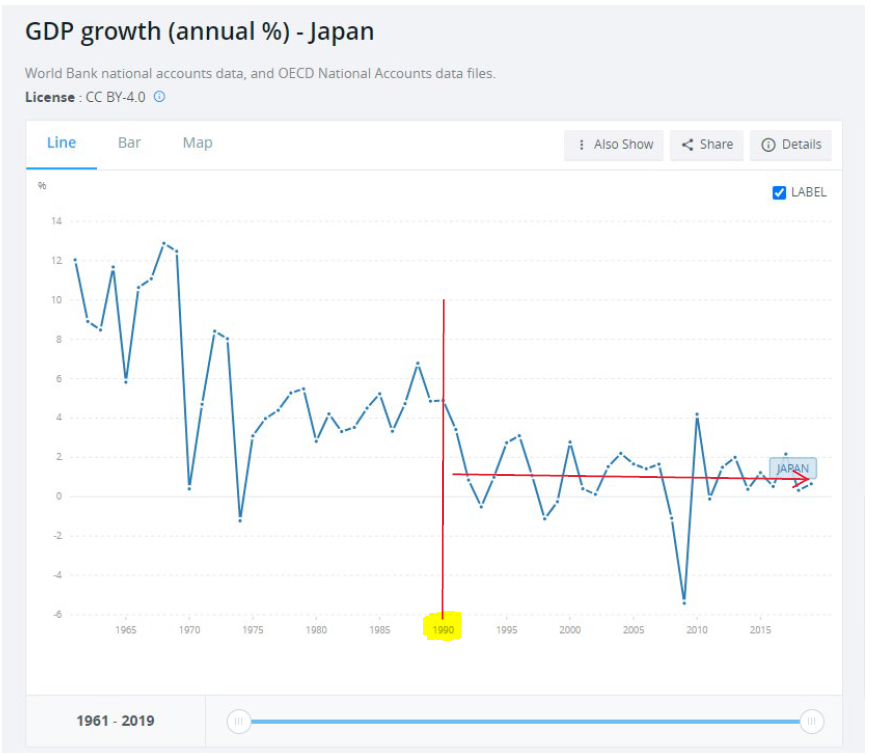 This data says inflation may not be as easy to come by as is currently being talked about. One thing might challenge this, however, and that is our burgeoning experiment with MMT – Modern Monetary Theory. Just months ago, this was largely dismissed as a pie-in-the-sky idea that would never work (and our doubts firmly remain). Now, in light of COVID and the government’s interventions in an effort to spell some relief, we are now in the early innings of seeing this theory in practice. Whether it works will remain a question to be answered in the years to come (and will likely be hotly debated for generations since we can’t agree on anything anymore!). What we will see in the nearer term is if there is any level of money printing and debt that makes a difference and spurs inflation and economic growth. Keep in mind that debt is only future consumption brought forward to today. By bringing that consumption forward, we won’t be consuming as much in the future. Just seems obvious, right…well unless we just keep piling on more debt…