When the Least Expected Happens

No rants this week, just right into a couple topics that are or will be important over the next few years. I know, everybody is a long-term investor, but nobody looks out more than a few months. Like we have said so many times before, it’s hard to make long-term plans when many let short-term swings in the market sway their judgement.

The quote above from Mark Twain seems so true in my life and certainly in regards to the markets. How many times do we say “It’s a can’t miss”?  As the Mariners’ season starts up (they won one against the Astros!!!), I can’t help but think of the number of “can’t miss” prospects that have gone belly-up. How about past examples in the markets?

Goldman Sachs in mid-2008 said oil could shoot up to $200 within the next two years, and “We see risk to our 2008/09 forecasts as distinctly to the upside.” Oops, I guess that thing we knew was right, was WAY wrong. 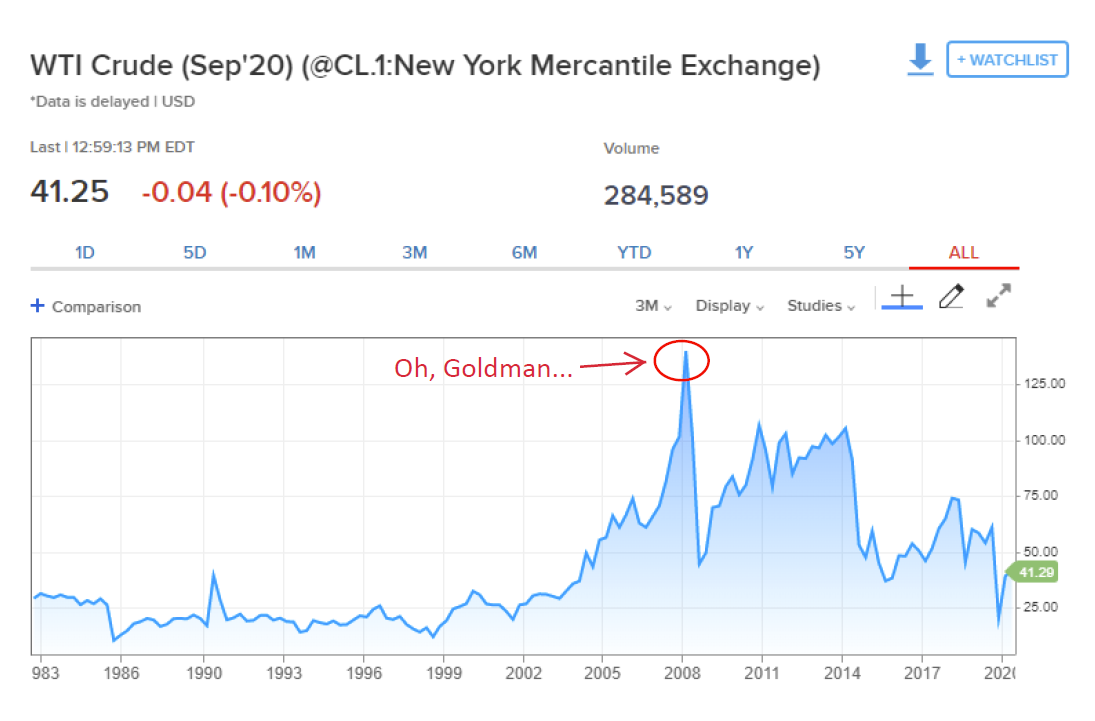 We’ve talked about cycles many times in the past and we don’t think they have gone away, but they do sometimes take longer than many think to turn. Take a look at the trade weighted dollar index. For a couple years, analysts have been calling for a lower dollar, but it’s been mostly up for the last five or six years. Is this trend finally starting to change? I think there are many reasons to think that it is. Not many are calling for a lower dollar, so as a contrarian, maybe it has peaked for this cycle.

I’ll give you one more that not many were talking about (prior to the last few weeks) and that is precious metals. We bought gold and silver before the market collapsed and COVID was a thing. We didn’t buy it because we knew anything was going to happen (we would have bought more if that were the case!). Instead, we bought it as a hedge against things we didn’t know at the time. We’ve been on that train for six months now and the rest of the world has now jumped on the bandwagon pushing prices up to levels not seen for years.

These charts may seem random and not related to the initial quote, so let me bring this full circle and talk about something (again) not many are talking about.

Most people are concerned about deflation and I would say the Federal Reserve is more concerned about deflation as well. If what we are sure will happen (no inflation) is what gets us in trouble, should we be looking at inflation in the future? Now, I agree that over the short run, there is no reason to believe that inflation will be a problem. Is it possible that over the next 3-5 years we start to see inflation?  How would we know? What are those indicators that may be saying something is going on?

While I don’t think oil is saying anything about inflation, I do like to pick on my favorite contrarian indicator – Goldman Sachs.  While supply and demand is skewed to the supply side, that will keep prices low. At the same time, oil is priced in dollars, so a weaker dollar would argue for a higher oil price. We’ll call that a draw and oil to remain in a relatively wide trading range.

I just mentioned the dollar. If we are in the next cycle where the dollar goes down, that would create inflation for us in the US, but make things cheaper in other parts of the world (Hey, create some inflation at home and allow our goods to be sold overseas for cheaper, win-win!). How do we know if the dollar is now in the next cycle? Well, the real answer is we don’t. However, I showed you charts of gold and silver above. It is interesting that those assets are making new highs at the same time the dollar is making new (near-term) lows. Coincidence? Probably not is my guess. If you take a look at the peak for the metals, you will see they peaked around 2012, which oddly enough was around the same time the dollar bottomed.

Don’t get me wrong, I don’t think we’re going to have 1970’s type inflation, but nobody would expect even 4% inflation at this point. Ultimately we will have to see how things play out. So far there are many things pointing to some level of inflation that we haven’t seen for more than a decade. Before we finish, I want to show you one more chart. This is a chart of ‘5-year, 5-year forward’ inflation rate…chew on that title for a minute. Basically it is looking at the 5-year expected inflation rate, 5-years from now. It’s not saying 4% or anything close to that, but the inflation expectations have been going up since the pandemic/recession started. This is where we get to the “it’s the things you know for sure that just ain’t so” will get us in trouble.

On a side note, that is why we try to be conservative with our planning expectations for inflation. For many, 20 or 30 years in retirement is a long time, and a lot of things can change in that period. It would be dangerous to assume the muted inflation we have grown accustomed to in recent years will continue that far into the future. Let’s plan as if it won’t, and then be positively surprised if it does.

Our model still has cash and fixed income as our two highest rated asset classes. US stocks are in third place and our money flow model still is saying be cautious. As always, we welcome your comments and questions. In the meantime, we’ll continue to test our assumptions, dig into our research, and lean into our model as we seek to be ever mindful of risk while pursuing long-term returns for your portfolio.