Is the cup half full or half empty?

Before we get into the markets, we want to pause for a second and say something that is sad to even have to print: “We stand against racism. We stand for justice. We stand firm in the belief that all persons are created equal, and are endowed with certain unalienable rights, that among these are Life, Liberty and the pursuit of Happiness.” Why is it sad to have to print that? Because it shouldn’t even be a debate. We should be long past this as a society, but we’re not. So we pause, we listen, we learn, and we press into the difficult discussions and changes that need to happen. Is our little firm going to bring about the sweeping changes that are needed? No. But our little firm can and will continue to serve all who come through our doors. Our little firm will continue to give of our time and resources to those who are in the trenches. Our little firm will continue to listen and learn, and we invite you to do the same. Perhaps a whole bunch of us doing the little things will yield the big results that are needed.

With that said, we now shift our eyes for the moment back to a discussion on the markets and economy. Since the stock market is a forward-looking instrument, it is often good to ask yourself whether the data you see is good or bad. We all have a base set of assumptions and ways of looking at the world, but is there a chance we are wrong? One of the hardest things to do is admit when your assumptions are wrong. Many investors have paid the price for trying to tell the market what to do and how to believe.

Now we are no different than anyone else (although we live and breathe this stuff). We don’t know the future any more than anyone else. And yes, there is a chance that we could be w-w-wrong. So in that spirit, let’s take a look at the data to figure out if our glass is half-full or half-empty.

I am not going to get into the pandemic, but I will start by looking at the economy’s reopening. On April 13th, we referenced a McKinsey study that looked at the potential shape of the recovery. We weren’t in the camp of a V-shaped recovery and still find that an unlikely outcome – but could we be wrong? Surely we could. There is an old saying in the investment world, ‘The market can be wrong longer that you can stay solvent.’ Many investors have paid dearly for their beliefs (one of the latest is Carl Icahn losing $2 billion when Hertz went bankrupt). I don’t think that will make him insolvent, but I don’t care who you are, $2 billion will make a dent in your finances, or at least your psyche!

The following are charts of various parts of the economy reopening and you can judge for yourself whether you think the glass is half-full or half-empty.

Driving is getting back to normal levels, although mass transit hasn’t recovered nearly as much – which leads to the question of how much of the total population is really moving about relative to pre-pandemic levels? Restaurant and hotel bookings are double or more compared to a couple months ago. Even airline travel is up significantly since April. Clearly these charts show the economy starting to open again and people beginning to participate in normal activities. Half full.

But Chris, surely you can’t say that airline travel is good because it’s ONLY down 85% instead of 95%.  Maybe not, but let’s look at some math (I know, I didn’t mention there would be math today…but we’re all still in homeschool mode, so here’s your math homework for the day).

If there were 1 billion passengers (which there were in 2018…and because it’s a nice round number), if travel was down 95%, that would mean that on an annual basis there would only be 50 million passengers flying. But if we now say traffic is only down 85%, that would mean 150 million passengers. In other words, passenger traffic has increased three-fold since the bottom. (As an aside, here in lies the deception of headlines…when you read “Passenger traffic increases three-fold,” you could be lulled into forgetting the other side of that headline might read, “Passenger traffic remains 85% off it’s highs”. Both are true, but which one brings hope and brings the marginal investment dollar back to the markets?)

Now take a look at the chart below. American Airlines stock has gone up almost 100% in the past few days. Is the market ahead of itself? I would argue yes, but what if I’m wrong? Theoretically at around $28 +/- that represented a price of a healthy airline business and $20 represents a business that is still only moving a fraction of their previous passengers.  Which is right? 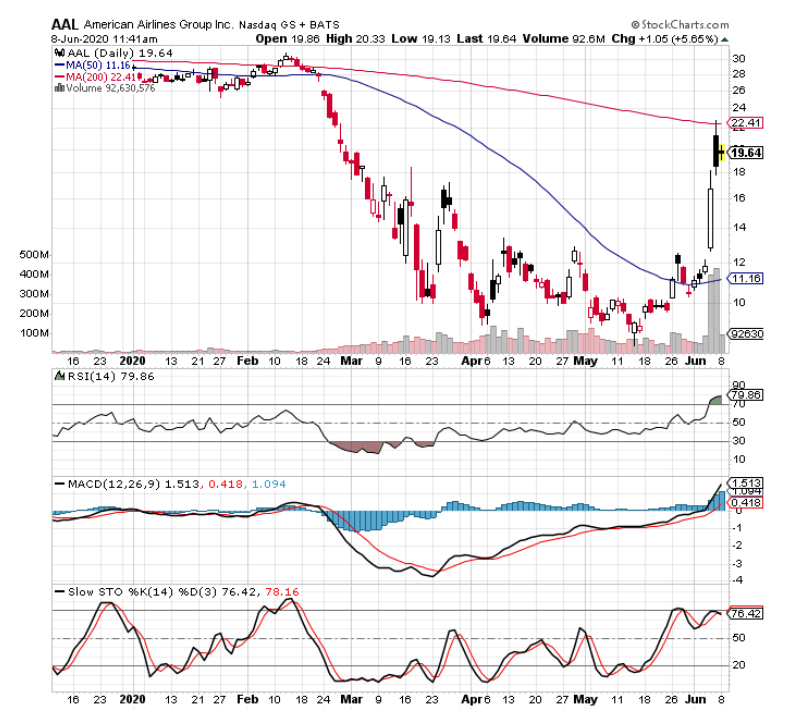 Take a look at the entire retail sector. It’s hard to believe that is at a new all time high. Of course, if you look at the top holdings, 75% are the largest retailers that never really closed down in the first place (sorry, small business owners). Could they have taken sales from other retailers that were forced to close? Probably. Will those other retail businesses be able to reopen and get that share back? Remains to be seen. 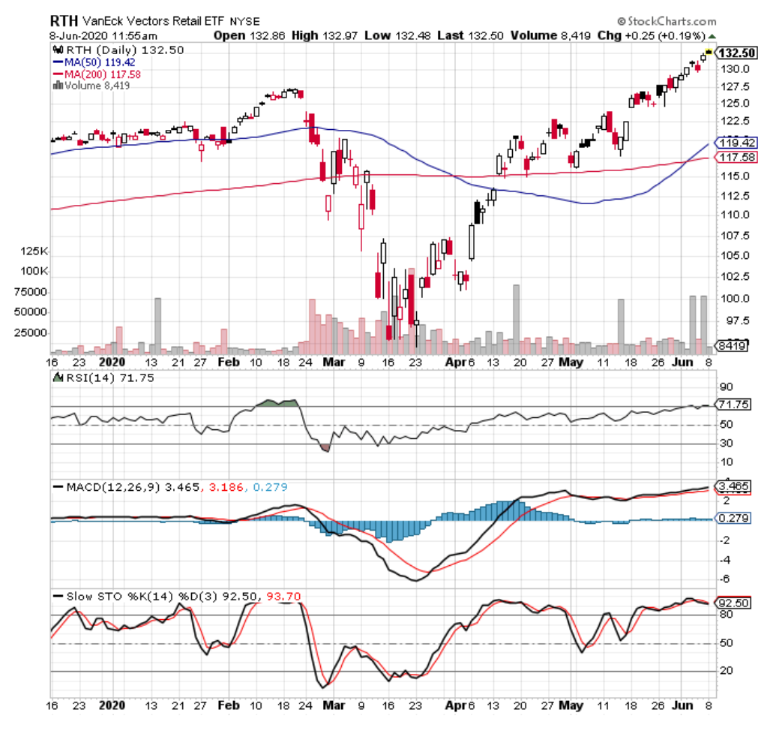 Lastly, I love the headline on CNBC.com from Mohamed El-Erian, the Chief Economic Advisor for Allianz. You can click on the headline below to read the full comments.

I too find in difficult betting on a continued ‘huge recovery’ in the stock market, but I do have to ask myself - what if I’m wrong? I think for most people it seems odd that the market is doing as well as it is given where we are in the economy and the pandemic.

I guess the other adage is ‘Don’t fight the FED.’ That works until it doesn’t work. Does anyone remember December 2018? The FED was raising interest rates and reducing their balance sheet. Until they weren’t…  The problem now is how long will they continue pumping ‘borrowed money’ into the system when the market is signaling a V-shape recovery?

As always, we welcome your comments and questions. In the meantime, we’ll continue to test our assumptions, dig into our research, and lean into our model as we seek to be ever-mindful of risk while pursuing long-term returns for your portfolio.