How do we define money? Now we start to see the effects of the shut-down.

Definition of money (according to Merriam-Webster)

something generally accepted as a medium of exchange, a measure of value, or a means of payment

I can generally agree with that definition, but let’s dig in a bit further. Clearly, we think of money as a form of payment (for a good or service) – a general medium of exchange. Let’s think about where all this started.

If you were a farmer back in the day, and you wanted to buy feed or lumber or any number of services, you would offer to trade some livestock or produce in exchange for what you need. That’s easy to understand, but more complicated in practice. Think of the basic issue of one part of the barter being of far greater value than the other part.  Naturally, you want the trade to be fair (equivalent in value), so you would take as much of the other product or service as it would to make a fair trade. What if you couldn’t consume all the product during its useful life (think fresh vegetables). This imbalance led to the need for a ledger.

A ledger is simply keeping track of what and how much is owed from any particular party. Now you could trade your cow for some potatoes and not have to receive many years of potatoes (which won’t be good for that long). Now the potato farmer owes the dairy farmer for additional potatoes. Now let’s assume the blacksmith wants potatoes, but the potato farmer doesn’t need blacksmith work, but the dairy farmer does. The dairy farmer would trade some of his “potato balance” to the blacksmith for iron work. Now things get a bit more complicated. Imagine having a very complex economy, it becomes inefficient to have all these ledgers for 100s or 1000s of industries, it becomes very difficult to keep track of those accounts.

This is where gold originally came to be a store of value and a medium of exchange. Hey, look at that, the definition of money. Now people could exchange products and services of different values through a medium of exchange. Sometimes you get gold, sometimes you give gold, depending on the differential in costs of trade. That mode was the predominate form of exchange, including the invention of coins and bills (current form of money that we think of), since they were backed by gold. That was until 1973, when the United States was ‘taken off the gold standard.’ Simply put, the US dollar was no longer backed by gold and only by the “Full Faith and Credit of the US Treasury.” What does that mean? It means the ability of the US government to tax citizens in order to pay debts (more practically put, “come hell or high water, we’ll come up with the money” says the federal government).

In 1973, when the US went off the gold standard our National Debt was $458 billion. That represented 32% of our GDP at the time. Today, we are north of $24 trillion and that represents roughly 112% of our GDP (see the chart below).  One note though – our GDP is going down, and our debt is going up. Why?  For one, it’s because we continue to roll out new fiscal and monetary packages to help those who have been most affected by the Coronavirus shutdown. 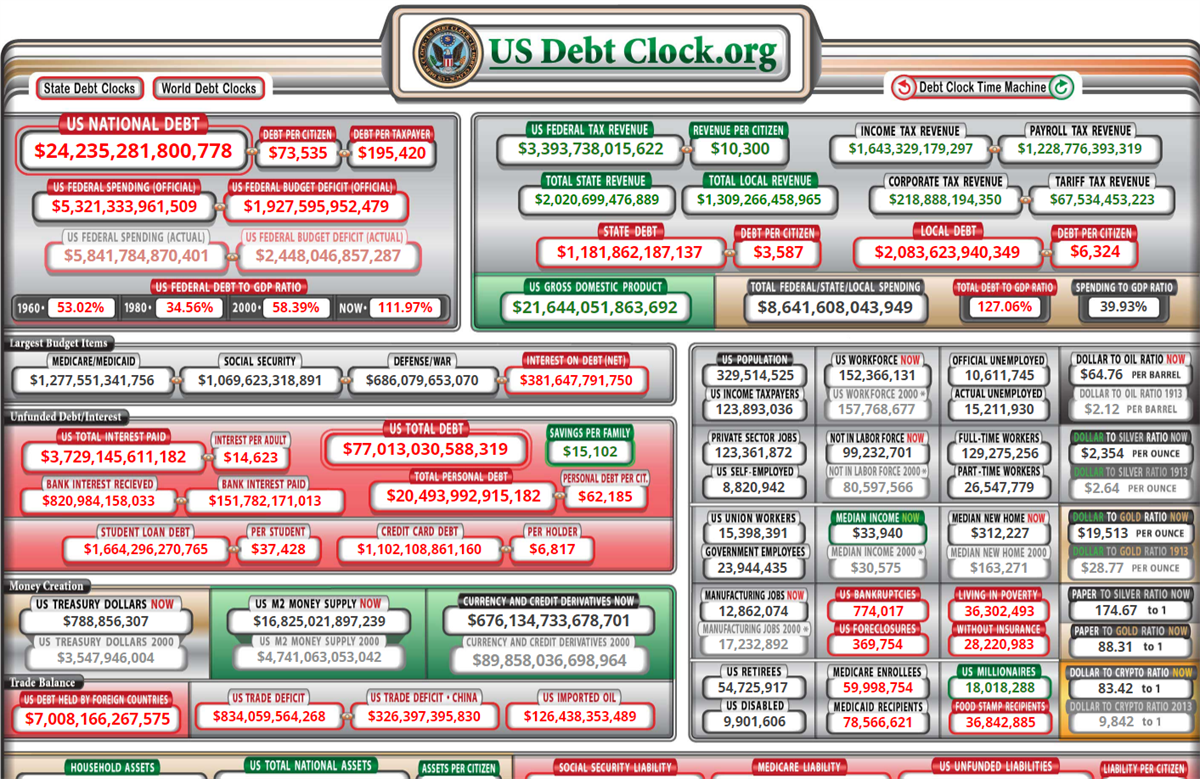 I have shown you this chart many times in the past, but here it shows what the Federal Reserve has done to the money supply since last September. After hitting a “low” of $3.8T, the Fed’s balance sheet has ballooned to over $6T as shown in the chart below. Keep in mind, this is a week old, so I’m sure the number is much higher than that now.

The only reason I bring all this up is that at some point this money printing will make a difference. Right now, many in our society are just trying to pay the bills and buy food, with no job due to forced closures of many parts of the economy. Rightfully, the government is stepping in to somewhat fill the gap, keeping in mind that many times government money doesn’t get in a timely fashion to where it is most needed. Enter in all the fiscal stimulus bills…Only time will tell if many of our businesses will be able to reopen and be profitable in a new post-pandemic world. Below is a chart I came across over the weekend. McKinsey Partners looked at the COVID-19 shutdown and possible outcomes once things can be restarted. They came up with nine different scenarios, from very optimistic to very pessimistic.  What do you think this recovery will look like? The reality is that no one truly knows, which makes economic decision-making difficult for business owners, investors, and consumers alike. I will say this – an adverse decision-making environment does not scream “imminent and powerful economic recovery.” 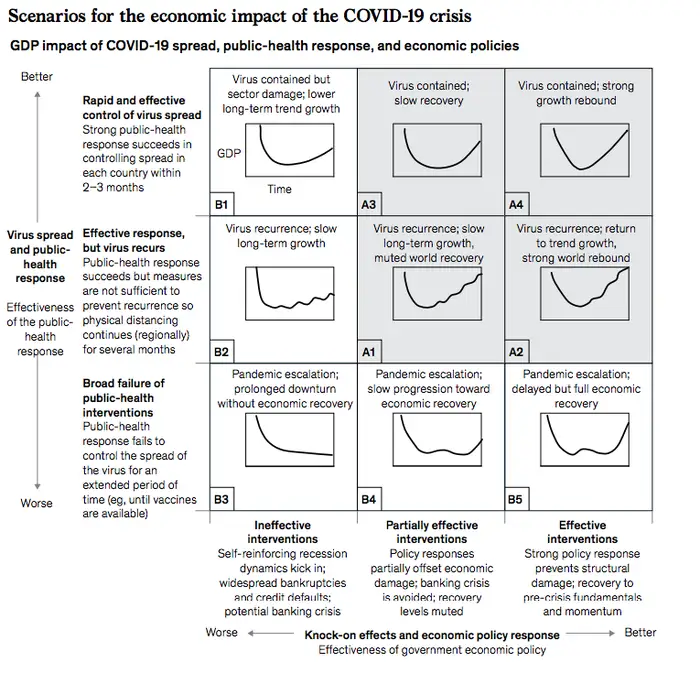 And finally, one last lagging chart. We will see these numbers every week and they will start to show what we already know – that a large part of the economy is shutdown and many are not working right now. The question that we will get answered in the next month will be how many are actually out of work. The big question, in my opinion, that needs to be answered is how long will these people will be out of work? Knowing this will help us sift through the scenarios above and start to get a sense for where we might land. Unemployment benefits help in the short run, but how much permanent damage has been done to many of our small businesses (how many won’t be able to reopen and/or how many won’t be able to re-staff with the same expert team that had them working so well previously)? 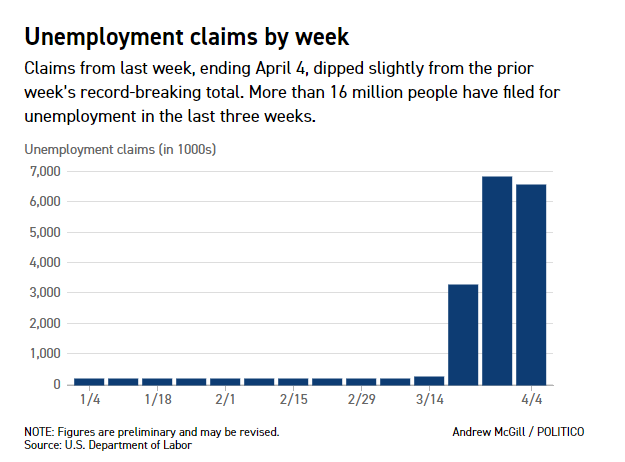 To close out this week’s piece, does all this money eventually cause other problems in the system? How does it manifest itself? Can we print all the money we want without any negative side effects? Will Modern Monetary Theory (MMT) be proven right and there is no risk of inflation by printing money?  We certainly have our opinions, but we won’t be proven right or wrong until all of this plays out. Until then, we all have to learn how to navigate in this grand experiment. The virus may go away, but the economic ramifications from the fiscal and monetary responses are going to linger much longer.

For now, stay healthy and stay safe. Practice your social distancing, wash your hands often or use hand sanitizer, and limit touching your face – even when you see the next multi-trillion package come rolling down the congressional line.