This is a big week for the economic movers and shakers as they convene in Jackson Hole, Wyoming. For the 22nd consecutive year, my invitation has been lost. Then again, maybe my criticism of the Federal Reserve is enough to keep me off the list. Aside from the expensive wines, late night adult beverages around the fire, and the best steaks Wyoming has to offer, there are likely many off-the-record conversations about what is going on in the world and what should be done about it.

Like ‘Six degrees of Kevin Bacon,’ there are six degrees of knowing somebody who is there now. Let’s look at some things those distant connections of ours may be talking about.

This data is a couple weeks old, so we will see what it looks like when it updates in the coming days.

You can see that financial conditions are getting tighter, meaning that it is getting harder to obtain, leverage, and generally use money. It is a way looking at the stress in the economy. You can see the points in the past that spike. These are related to major financial issues in the economy. 2008 is the obvious but look at the data around 1987 (when the market went down 25% in one day). This was also around the Savings and Loan crisis. You can also see an elevated area around the 1997 to 1999 period. That was Long Term Capital’s hedge fund implosion that threatened to spread to the broader financial market.

The interesting period on the chart is the period of the 1970s. You can see a generally elevated stress in the economy (caused by inflation). You can also see the dip in the middle (bottoming in the 1975/76 area), which was the response to the 1973/74 bear market recession. Then inflation caused the FED to get further restrictive, culminating with the final bear market/recession in 1980/81. Several weeks ago, I brought up the idea of the bullwhip effect (click here to review). That was a very similar time to today and, if I have a guess, we will likely have a similar response to it. Which is to say that we will not likely fully conquer inflation the first time around and will probably have the bullwhip effect show up over the next many years as financial conditions oscillate between tighter and looser.

Next, I’m sure Jackson Hole will also include plenty of conversation regarding the inverted yield curve that we’ve talked about for a while.

As you’ve seen before, when the yield curve goes negative (like it is now), usually a recession follows. This time is likely no different. The big question that those in Jackson Hole are talking about is what kind of recession will it be? A mild one or a deep long-lasting one? Well, that is the question, and one we have been trying to answer over the last several months. Our thoughts are we will likely have a mild recession, but probably not enough to tame inflation at this time. We have said that inflation will likely start to   come down mid- to late-summer and it is arriving on time.

The problem with that is we still have loose monetary conditions (above) and if interest rates fall and the FED slows their increases, it may not fully put out those flames. That will likely lead to another round of inflation a couple years from now. Of course, if it was up to us and we were invited to Jackson Hole, we would argue not to move interest rates around and just let the economy find its own equilibrium. With that you would have a neutral financial condition to where people could expect certain financing costs and leverage would be mostly in check, but businesses and consumers would adjust.

Another thing that I’m sure will come up in conversations is the size of the Federal Reserve’s balance sheet. We’ve shown this before, but it’s good to update it. You can see that the trajectory since the 2008 financial crisis is unlike anything we’ve seen before (at least outside of wartime).

And finally, what conversation over a 30-year-old scotch would be complete without talking about the 800-pound gorilla in the room? Inflation. 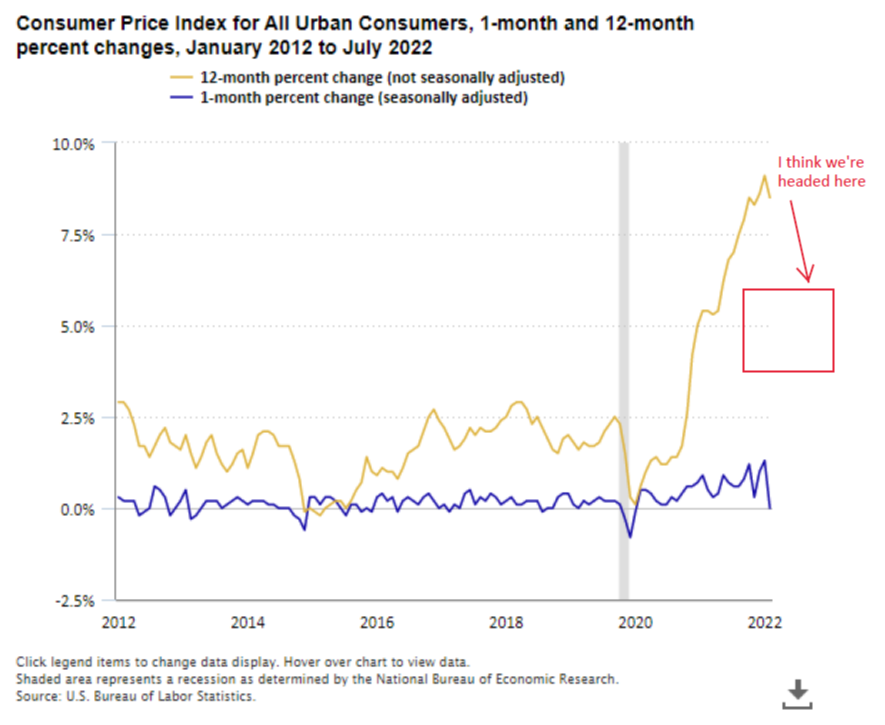 Many believe that inflation has peaked (and you know where we stand on that). As a side note, ironically, the price of that juicy ribeye they’ll be eating while discussing this topic is on its way down, according to a great article in the Wall Street Journal just yesterday. The real question is how far does inflation come down? Like we have been saying, and I’d like to have an off-the-record talk with Jay (Jerome Powell, that is) over several scotches (to get the real answer) about how far is the FED willing to go to bring inflation down to their “target rate” of 2% inflation. My guess is that will be a moving target in the coming months and years as they change the definition and the metrics that they focus on. But that’s just me being cynical.

Jerome Powell will be making his speech at the meeting on Friday, so stay tuned for that. The markets will be reacting to his remarks.

That’s it for this week, enjoy your waning summer, as children and teachers are starting to go back to school over the next few weeks. Let us know if you have any questions about the market or larger planning issues.