It all depends on the FED

If you have been reading my weekly piece, you will know that we spend a lot of time discussing what the FED will do. Raise rates, cut rates, QE, QT, grow the balance sheet, shrink the balance sheet.

Believe me, we don’t talk about this because we want to, but because we have to. The only thing that has really made a difference in the market is how much liquidity is being put in or taken out. Not company fundamentals or earning growth or valuations. Is the FED dovish or hawkish? That’s it (and it’s not the way it’s supposed to be).

You know the definition of insanity, right? Doing the same thing over and over and expecting different results. Well, that’s what the FED has been doing for the last 20+ years and, in my opinion, simply compounding the long-term (negative) effect in pursuit of the short-term (positive) fix. For those of you asking, “well, what’s the solution?”, please indulge me and let me propose a way to stop the madness. It might just fix the crazy markets for the better.

I had a discussion yesterday regarding the market and current prices and potential future prices. Now to being perfectly blunt, PRICES WERE (AND STILL ARE IN SOME MARKETS) TOO HIGH. The market was propped up by monetary stimulus and low interest rates, just as were houses, cars, RVs, boats, you name it. Except for those that decided to sell any of those assets, the true value of them will be lower as policy normalizes over the next couple of years.

So, if I can give FED Chair Jerome Powell a map to get out of the hamster wheel, here it is (because I know he is a frequent reader of our blog). Kidding aside, I would say this is what I want to see to have greater confidence in the long-term trajectory of the economy and the markets.

First step…STOP. That’s right – sometimes the best action is to stop acting! Resist the urge to do something for the sake of doing something. You know the old saying – when the hole you dug is too deep, stop digging.

This fight seems to be against inflation – but there’s mounting evidence that this is already abating. Let’s take a look at a few data points that indicate as much. First, the economy is clearly slowing (we showed you the GDPNow forecast last week). Commodities have fallen over the last few weeks. The commodity that is said to have a PhD is “Doctor Copper,” the most common industrial commodity and the one most sensitive to changing economic conditions. See the chart below.

How about lumber prices? We’ve mentioned those in the past too. 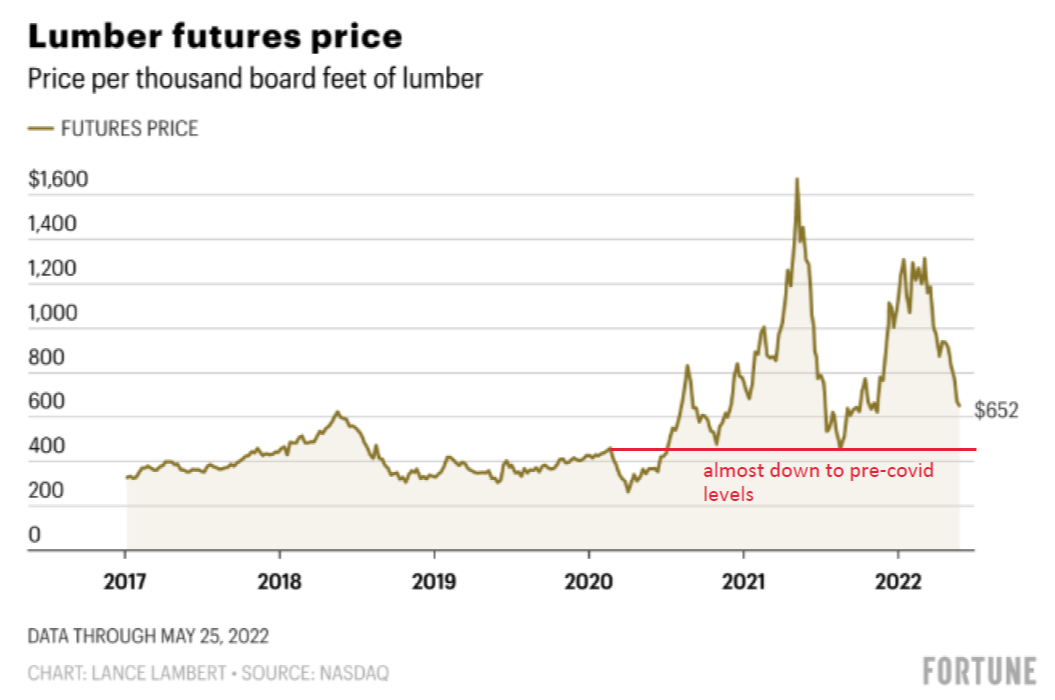 I’m not entirely sure, but is that the bullwhip effect? I think so. 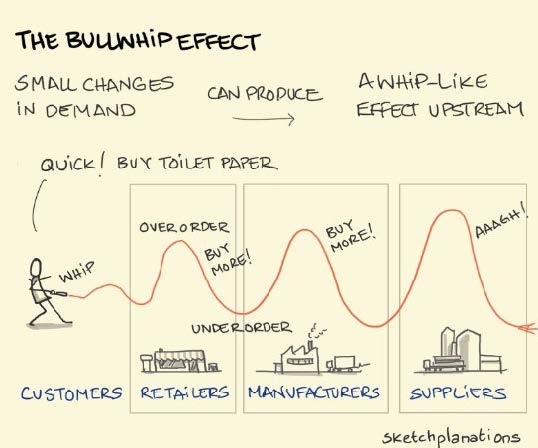 We mentioned oil prices coming down as well. If you remember, energy prices were one of the largest contributors to inflation over the last year (in addition to used autos). We’ve shown the chart of used cars, but let’s show it again for fun! This time I will show the table behind the chart so that we can see where inflation is going. Ok, so it’s a bit small for my old eyes, but I think you can make it out. Although prices are still above year ago levels, they are now only 9.7% above a year ago. If you look (and do the math) in January, prices were 45% higher than January 2021. This year, prices are down 7% from January. Will we get to pre-covid levels? That might take some time, but you know what they say…”Price cures price.”

The length of car loans has been stretched with 7-year loans now becoming the norm (just to keep payments “affordable”). That being said, here are two news blurbs regarding car payments.

At the same time, loan delinquencies are moving higher.

If you’re in the market for a car, I have a feeling there will be many for sale in the near future. Rumor has it that banks have so many repos that, rather than flood the market, they are parking them and slowly releasing them to the market. But as prices come down, that will likely change and you could see many of those come to market, pushing prices down even further.

Ok, so I’ve made my case that inflation is finally starting to come down. That should give the Federal Reserve a little cushion to slow their rate increases over the next few months. With this, can I make an argument for the FED to slow it’s roll and then stick to their plan? The plan of reasonable interest rates for the given economy and slowly reduce its balance sheet to where it used to be.

That means they live up to their dual mandate – STABLE PRICES and FULL EMPLOYMENT. That’s it. Not a stock market that goes up all the time, not a housing market that goes up to create the wealth effect. If those have cycles, so be it. Let it go and correct by itself. If it bleeds over to the real economy, then you make adjustments.

In my opinion, that’s the only way we are going to get away from this insanity. Then we can allow zombie companies to fail, letting the bankruptcy courts to do their thing and clear the way for new innovative companies to replace the unprofitable ones. Does that cause some pain? Yep. But so does this monetary policy that we have been pursuing for the last 20 years. I guess pick your poison, but I pick letting markets adjust and good companies to thrive, while poorly run companies go away. It’s a sacrifice in the short term in exchange for better long-term opportunities.

To close this week out, take a look at the next chart.  The expectations are for the FED to raise rates to around 3.5% and then to cut about 1% over the following year. Do we really need to keep raising rates, only to cut them because we raised them too far? As Andrew would say, that doesn’t seem to pass the sniff test. We shall see. 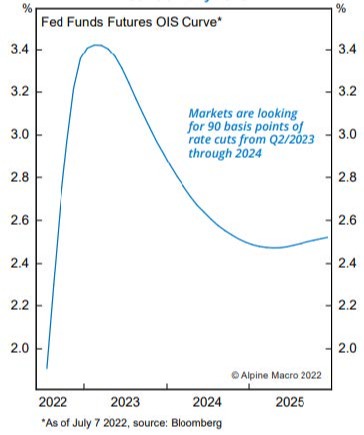 That’s it for now. Thanks for indulging me, and I promise we’ll take a break from the FED next week! Until then, have a great week as we enjoy this long-awaited sunshine…and please do reach out with questions, comments, or concerns.