And Down the Stretch They Come

I’m not much of a horse racing aficionado, but I’ll use the reference to suit this week’s comments. For those of you that do fancy yourselves fans, I hope you will excuse any liberties I take on the analogy.

As the horses are staged and jockeys are readied, each jockey has a plan they will try and execute. There are many variables of course – type of track, length, current weather/track conditions, and competitors.  They all factor into how the horses will race. Some horses like to come from behind while some are better out front, but through the final turn and into the final stretch, the horses will start to get into position for the final push. Sometimes the leader can hold on to win, but many times a horse (or many) will pass the lead horse to win the race. Ok, Chris, thanks for horse racing strategy 101. What does that have to do with investing and planning? Well, it doesn’t directly, but I’m going to try and ‘stretch’ it to fit.

As you know, I’m no fan of the Federal Reserve and I have said many times over the years that they tend to overreact one way or the other and drive the proverbial car from one ditch to the next. They’ve already driven the car into the ‘inflation’ ditch and now they are trying to correct that error by over-tightening and driving the ‘car’ into the recession ditch.

You also know that the market is one of the best leading indicators of economic recovery or contraction. It will usually lead the economy by 6-9 months. Is it also possible that instead of just predicting the future of the economy it could be leading it one way or the other? I do think that is possible. Is it happening this time? Not sure. The ‘market’ is certainly looking for the “pivot” from the FED, which may or may not come. So, let’s look at some interesting (at least to me) indicators and charts to help guide portfolio construction and corresponding risk.

Let’s start with the big picture, the longer-term chart of the S&P 500. 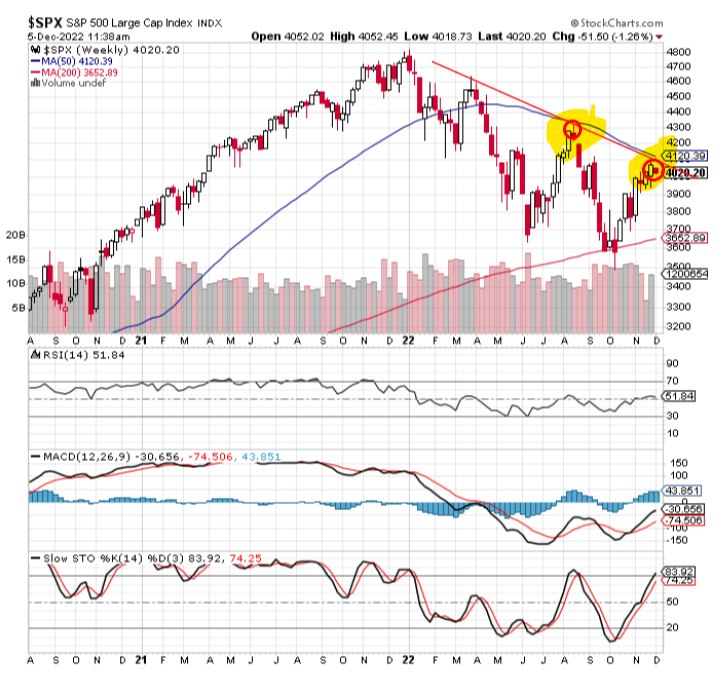 You can see a couple things in this chart. First is the market has rebounded from the lows in October and, like we said back then, it will likely head back to one of a couple resistance levels (see here).  So far, it has mostly returned to its 200-day moving average, which is typically noted as key long-term support or resistance (depending on which side of the line you’re on). Let’s look at the shorter-term chart for a closer look. 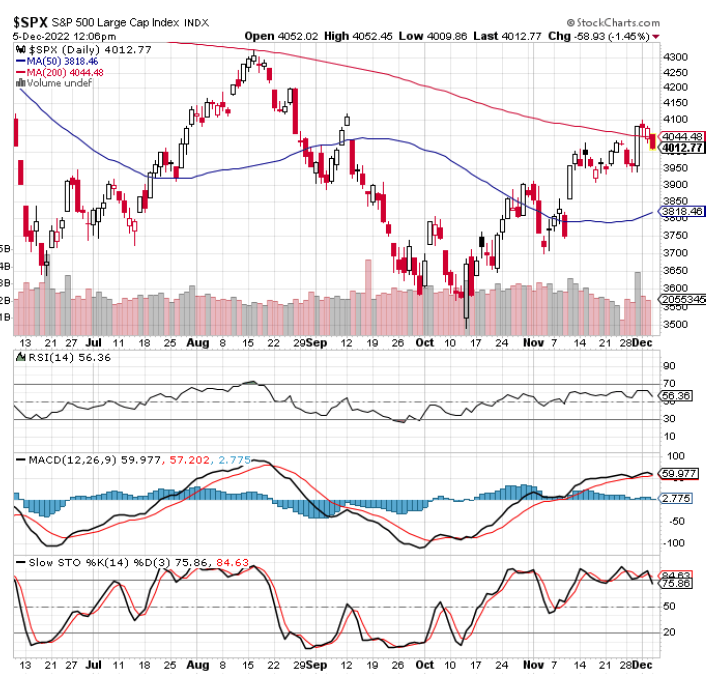 You can see that in early November, the market approached the 50-day average. It then backed off, setting up another test of that resistance, which it broke through thanks in part to a dovish FED hinting at a possible “pivot.”  Which may not be a pivot and more of just a slowdown in the increases of interest rate hikes. But regardless, the market then took a run to the 200-day average and has been flirting with it for a week or so. That was our second resistance level we noted in our October 25th piece. It also appears to have hit the downtrend line in the longer-term chart (first chart). Does that mean the market is done going up? Tough to say. Let’s look at some other things.

So, what now? As you know, we all have our opinions, but we know that emotions can lead us astray as far as investing goes, so we developed our “model” years ago and it continues to serve as an impartial observer of the markets. It compares assets to each other and determines which are the best or worst to own relative to one another. It doesn’t have emotions to get in the way.

Our model looks at five major asset classes. Here is what they look like today. Big changes, as three asset classes fight for the number two spot and are all essentially tied currently.

Remember, we overweight the top two asset classes. Right now, cash is solidly number one and there is essentially a three-way dead heat for second place.  Let’s look at the recent history to see how things have changed recently. 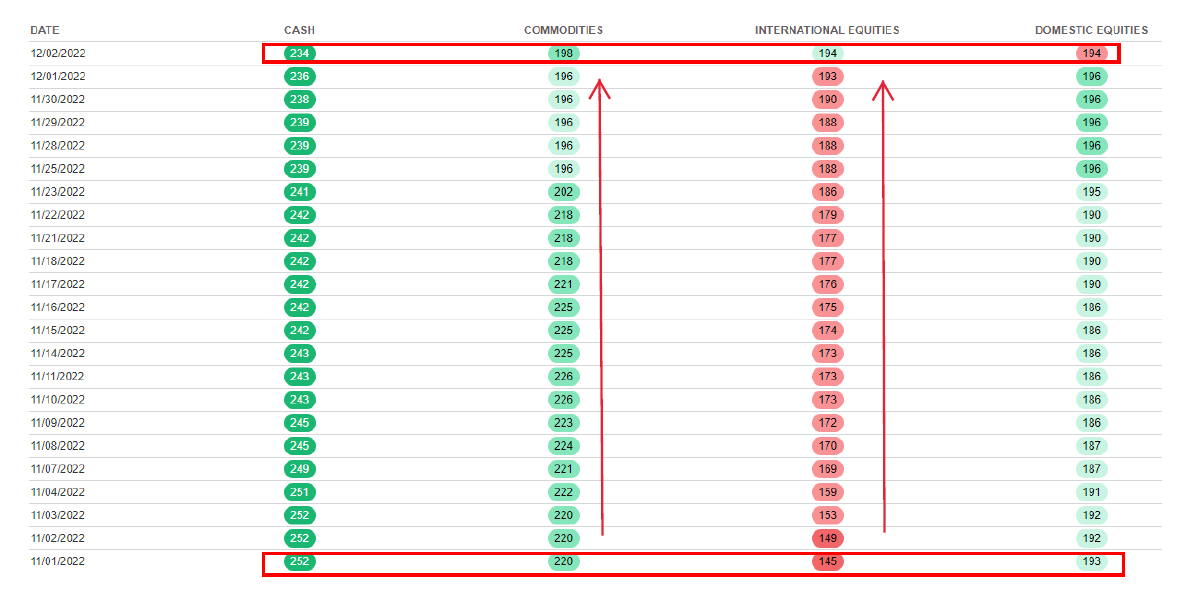 Sorry it’s a bit small (click to enlarge), but I want to point out a couple things. The rankings for international have moved substantially over the last 30 days. International was a distant last place as of October 1st but is now just few points from 2nd place (reminiscent of the 2022 Mariners in June vs October!). You can see that most of the point change over the last month came from a weakening Commodities category, as US equities have not really moved. Cash has weakened, albeit slightly, over that time frame.

You’ll also notice, that at the beginning of December, there was a tie between US equities and Commodities. We reduced our commodity exposure by roughly half in the middle of November, anticipating more weakness to come. Right now, it looks like the fight on Yellowstone last night (if you’re a Yellowstone fan you’ll know what I’m talking about) between those three asset classes. Who will come out on top? Depends on your time frame. Over the short-run I would expect commodities to continue to weaken, while international equities could continue to strengthen. Why do I say that? Let’s look back at something I have referenced a couple times. That would be the dollar index.

As I’ve said before, I think this 105 level is very important. The dollar has come down to that level, which has certainly taken some pressure off multinational corporation’s earnings, as the strong dollar is a headwind for international sales. But it also helps foreign companies too. A cheaper dollar allows them to convert dollars back to their native currency at higher levels (their currencies are stronger, relative to the dollar).

So, is it a big surprise to see international doing better? Not really. Is it sustainable? Depends…

If the FED is coming to the end of rate hikes and will “pivot” over the next quarter or so, then yes, the dollar keeps going down as US interest rates are less attractive on the margin. That should give equities a boost and weaken commodities a bit. But wait! What about inflation?

See, I knew we have smart clients. That’s the trillion-dollar question right now. Has the FED done enough to slow the economy, to get inflation down to the 2% level? Let me answer that in as clear a way as possible. NO, not in my opinion. If that’s the case, then we are setting ourselves up for the bullwhip effect that we have discussed before. But can I propose something? What’s magical about 2%?

As it turns out, nothing! For most of 10+ years after the Great Recession, the economy couldn’t get to 2% inflation (see the chart below). So, the FED said they would be accommodative until the inflation rate got above 2%. They were more concerned about deflation at the time than inflation, so they pumped money into the system and for over a decade couldn’t get meaningful traction on that 2% inflation number. 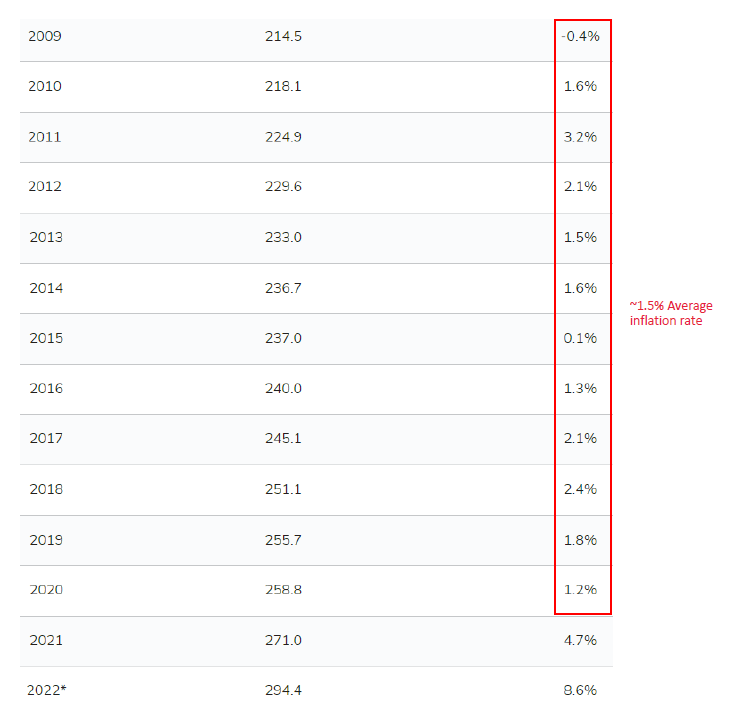 Like the saying goes, if a little is good, a lot must be better. So out come the fire hoses of money during COVID, with no real fear that inflation would result. But there is nothing holding us to 2% inflation, other than we couldn’t get above it since 2008, until the aftermath of COVID. Here’s an idea, why don’t we target the average for nearly the last century? What’s that you ask? 3.12%.

You wonder why we use roughly 3%-3.25% inflation in our planning calculations? There’s the answer. 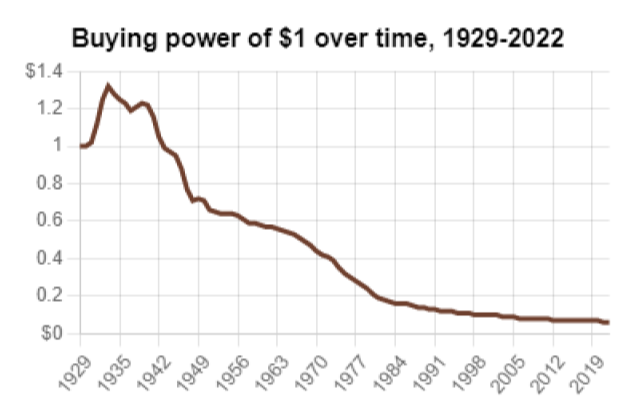 Of course, that does lead to one major issue we have to worry about. A dollar in 1929 is worth 6 cents today in purchasing power. Yikes!

So, as the economy is coming down the home stretch, all these horses are jockeying for position. Interest rates, stocks, the dollar, inflation and the FED are all bunched together right now. The race isn’t at a point where a winner can be clearly called, which is a big reason we maintain diversification and a relatively conservative posture with your portfolios. We’ll continue to adjust as the race plays out. The winner will depend on your time horizon. Ultimately, interest rates will come down, as will the dollar and inflation, which will boost stocks and eventually home prices. Some of those will not happen for many years, as the economy needs to work through the mispricing of assets thanks to extended zero interest rate policies around the world.

I hope you enjoyed (or at least got something out of) this week’s piece. Thanks for reading. Let us know if you have any questions.