As the little ghouls and goblins make their rounds this coming Monday, some of us adults will be having fun of our own at Halloween parties this weekend. It’s hard to tell if the FED will trick or treat investors at this coming week’s Federal Open Market Committee meeting.

We’ll make it a quick one today.

The market is currently working off an oversold condition. We are closing in on the 50-day moving average and the first area of resistance in that 3800-3900 area.

And why wouldn’t it, because so many investors are bearish on the market? Seems only right that the market would go up (note sarcasm). Remember, this is a contrarian indicator. 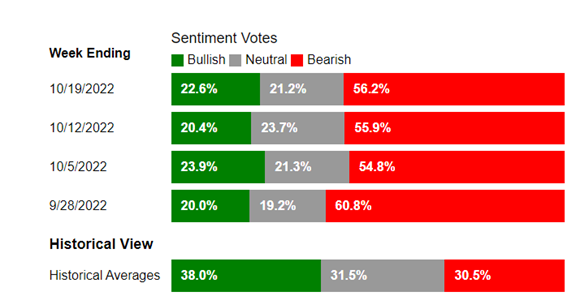 As we have been saying here for quite some time, the FED is playing a dangerous game. As seen in this very interesting chart below, they have increased interest rates faster than any time since 1988. They risk raising rates too far, too fast and thus causing something in the world to break. 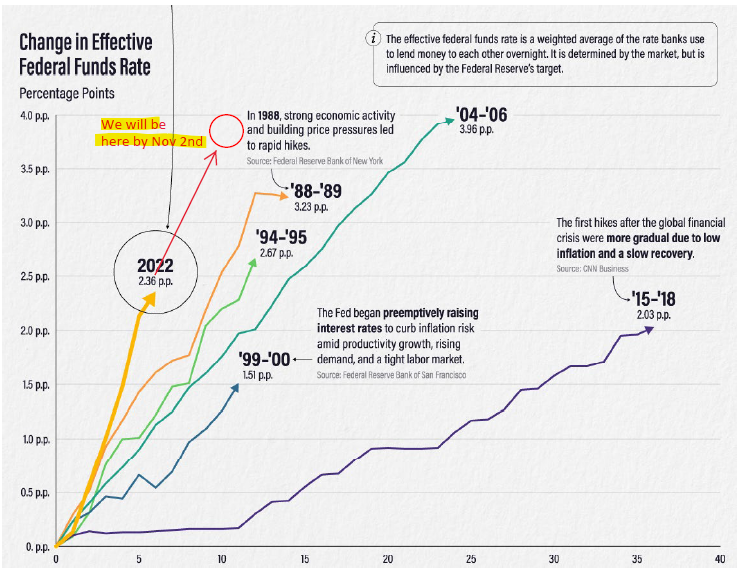 We’ve already seen the UK pension system come within days of collapsing, so much so that the Bank of England has had to intervene in the UK bond market many times over the last couple weeks.

Now, through the FED’s “mouthpiece,” otherwise known as Nick Timiraos at the Wall Street Journal, a few Fed governors are starting to say they have gone too far (or at least too fast). Nick is now reporting that the FED may start to cut back the pace of rate increases.

But wait, is that the “pivot” the market has been waiting for? Maybe. The real pivot most have been waiting for is the same condition that has been repeated so many times since the Great Financial Crisis, and that is the FED raises rates too far and then has to cut interest rates. That’s a different type of pivot than just slowing the rate increases.

What has been affected is the US dollar. That is where a lot of pain is being felt. Of course, for us here in the states, that is our currency, and we don’t feel it so much. As a matter of fact, a strong dollar allows us to purchase goods produced in other countries for less, creating a bit of deflation. For those countries it causes inflation.

Here’s a chart of the US dollar.

You can see it’s as high as it’s been since the early 2000s. Here’s a small sample of what inflation looks like outside the US. 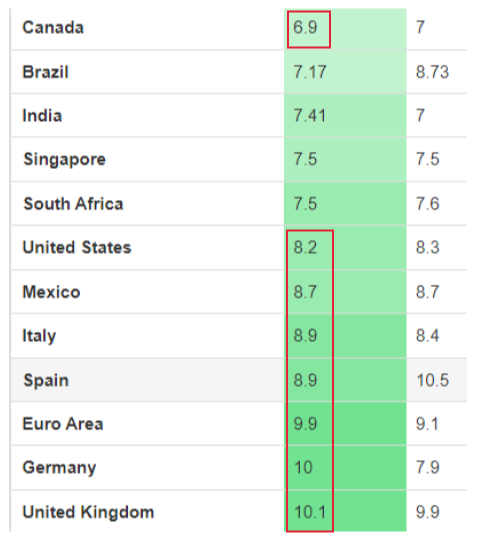 Many of these countries are also embarking on massive rate increases because of supply chains, the pandemic, and massive government spending around the globe has created inflation. That is quickly winding down. As we have been saying, inflation has peaked and is slowly coming down. If you look at backward data, it would say inflation is a BIG problem, but if you look forward, it’s a different story. The well-respected Professor Jeremy Siegel believes that the inflation rate was under-reported due to “Owner’s equivalent rent” previously, but now it is being over-reported (it is roughly 40% of Core CPI). As we have expressed here before, many real estate markets are going down, as are rents in many cities. This has yet to show up in the data, but we believe it will over the next several months.

Inventories are building and, if you are in the market for goods, this Christmas should be an excellent opportunity to get good deals. I saw yesterday that Costco is already advertising ‘Black Friday’ sales. So much for the day after Thanksgiving, it’s now starting in October.

This is already a bit longer than I wanted, so let’s just say one more thing. A 0.75% rate increase is already priced into the bond markets and that is what we are likely to get on November 2nd when the FED meets. As always, it’s not so much the announcement, but the language they use after, that moves the markets. Will they give us a trick or treat next Wednesday? Stay tuned.