One of my favorite quotes from Warren Buffett is “You never know who’s swimming naked until the tide goes out.” At this point it appears that China’s Evergrande Group has been swimming naked and now the tide has started to go out. It’s not a pretty picture. 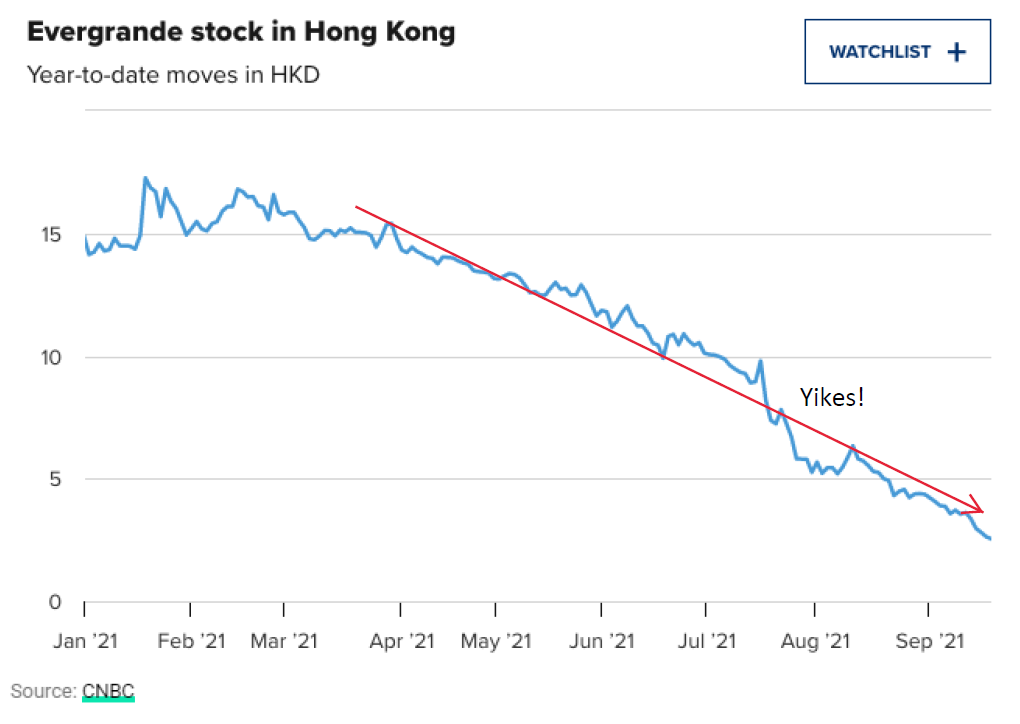 For those of you that are unfamiliar with the Evergrande Group, they are the second largest property developer in China and also are the most indebted company in China, with total liabilities of $1.97T Yuan ($300 Billion). It also has averaged 6x debt-to-equity over the last five years.

So what, you might say? And maybe you’re right. Maybe it doesn’t affect you…but what if it will? If you side with economist Ed Yardeni, he believes this will be similar to the Long-Term Capital Management situation that occurred back in 1998. If you remember, LTCM was a hedge fund that was founded by a lot of very smart people. Based on their models, they believed they could leverage up their portfolio in order to achieve higher returns. They were right, until they were wrong.

We have discussed them in the past and the bottom line is debt is good on the upside but can be disastrous on the way down. In this case, it was catastrophic and almost caused a major financial crisis. There is a great book if you have more interest.

If we go with Ed Yardeni, basically he believes that the Chinese government will have to bail them out, as they are “too big to fail.” When have we heard that before? Hmmm. In 1998, the Federal Reserve went to the investment banks that lent LTCM the money to lever up their balance sheet and said, you fed this monster, now you fix it. And they did, by organizing a consortium of banks to buy the assets and bail them out, giving them time to sell the assets over time.

I’ve given this analogy many times over 20 years and I will add one more time to that list. It’s a story about a little fish that gets eaten by a bigger fish.

DATE TBD – The Fed and US Government (now the little fish) gets eaten by ???

In each of these cases above, leverage is the problem, and the only solution is to find a bigger fish that can swallow the debt because of their bigger balance sheet. LTCM had a 30:1 leverage ratio, Bear Stearns had a 35:1 leverage ratio, and Lehman Brothers had a 30:1 ratio. Odd how similar all these numbers are?

One has to wonder what happens when the “little fish” doesn’t have a bigger fish to consume them. If I do some quick math on the chart below, it looks like the US has almost (are you sitting down) $29 trillion in debt. Or should I say we all have $29 trillion in debt, or roughly $86,509 per citizen? 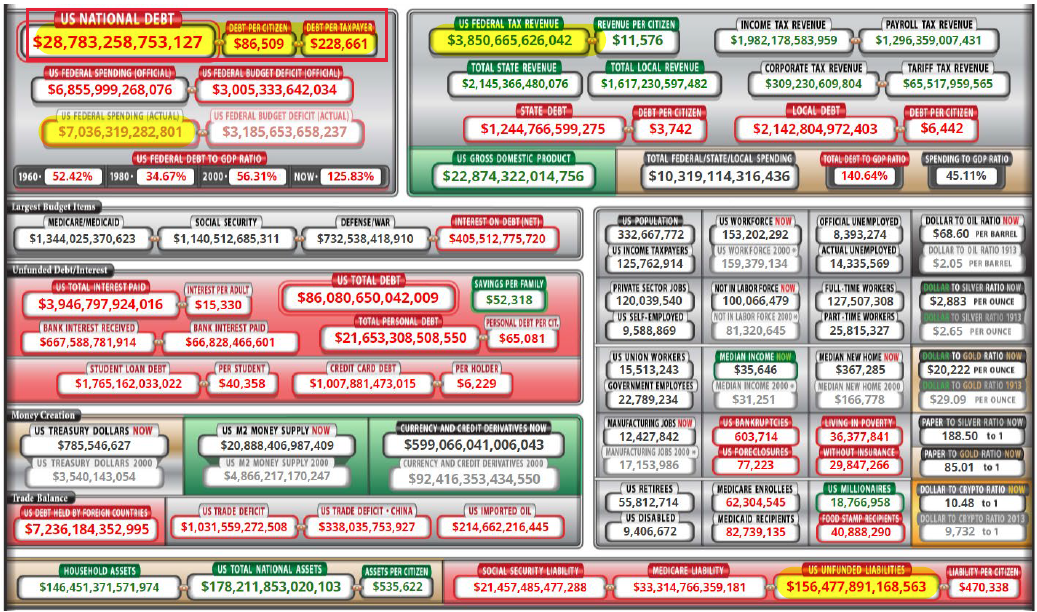 Leverage for the US is not really an issue, since it has the ability (and uses it freely) to print as much money as it needs. But right now, the US Government has assets of about $8 trillion (not including land) and a total of $156 trillion in unfunded liabilities. That would be bad enough, but when you are spending $7 for every $3 of income, you can clearly see we are going in the wrong direction.

As we’ve said in the past and certain “academics” have put forth, debt is just someone else’s asset. Ok, I will agree with that.  What happens when someone is no longer able to make payments on said debt? What is the value of your asset? Let’s go back up to Evergrande and ask their creditors, what’s the value of your asset when Evergrande can no longer pay the interest, nevertheless the principal, back? Below is my hypothetical conversation with Stephanie Kelton, a professor of economics at Stony Brook University and famed proponent of “Modern Monetary Theory”:

[SK] Oh, Chris, you silly boy. You don’t understand, you’re just too simple minded. The US government is different than a company, because they do have the ability to print money.

[CF] But what happens when that money is no longer worth what it used to be worth?

[SK] See there you go again, bringing reason into the argument. Inflation is a good thing. It’s how the government continues to spend more than it brings in and never has to worry about the effects. (Whoops, did that slip out?)

[CF] So, as long as inflation (government theft of people’s money) doesn’t get too bad so that people actually notice its effects, then things are ok?

[SK] You are correct. Think of how many things we could pay for if we just started printing even more money. We would have the nicest roads, the best environmentally-clean buildings, everyone could have free college, the world would be perfect.

[CF] And if inflation does go too high? Maybe putting us in a recession and the government is forced to print more money just to pay interest on existing debt?

[SK] Well, that’s where the wheels fall off the bus. Let’s just not talk about that outcome.

If you’re interested in an article about this, there was one printed in the New Yorker a couple years ago.  Click here.

As ultimate guarantors of our debt, it’s this outcome that should concern us most. Until that happens, we can look at China’s Evergrande Group and maybe remind ourselves that debt does matter and when a panic in the markets happen, all correlations gravitate quickly to 1.0 (meaning people sell whatever they can, for any price, regardless of the asset). Let’s hope we’re not the ones swimming naked and don’t know it. For now, though, let’s also not panic and instead remember that we’re investing for the long-term. Rough days like today are normal, despite what this unusual year may have led us to believe.

As always, have a good week and we welcome any comments or questions.