You missed by how far?

And no, that not a reference to my golf game. I’m not too far from one green, just close to another!

On a quick golf note, Tiger Woods caddied for his son Charlie over the weekend. He shot a personal best 68. Here’s his quote.

Sounds like he’s rehearsed his sayings. Impressive score for a kid with the spotlight all over him.

Back to the world of business, there seems to have been a slight miscalculation of jobs created in the second quarter. The BLS (Bureau of Labor Statistics) said that 1,121,500, while the Current Employment Statistics (CES) estimated job growth to be 1,047,000. It turns out that, according the Philadelphia FED, only 10,500 jobs were created. That’s a big difference – and I think it matters! Let’s discuss.

This (significantly) lower number is jarring – but it does start to square up the difference between the Household Survey and the Establishment Survey. Take a look at the chart below. 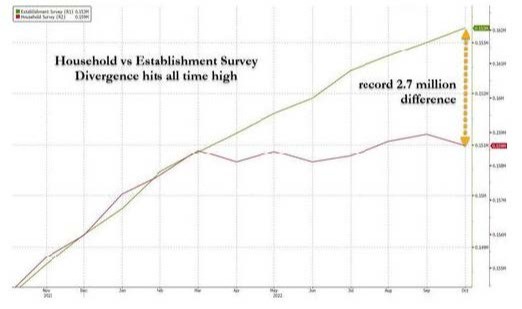 Let’s show a different chart that compares the two surveys since March. 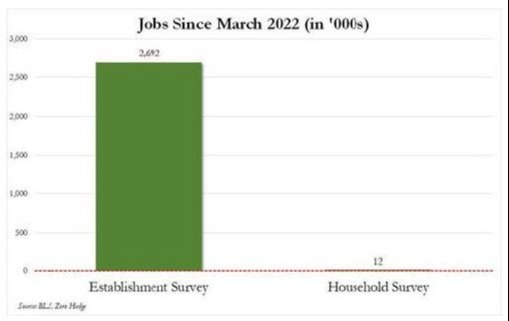 It turns out that there was a very low response rate in the November Establishment survey, so the Department of Labor was “guessing” to fill in the gaps from the lack of responses.

If we take those roughly 1.05 million jobs that weren’t created and subtract them from the “jobs report”, here’s what it looks like. 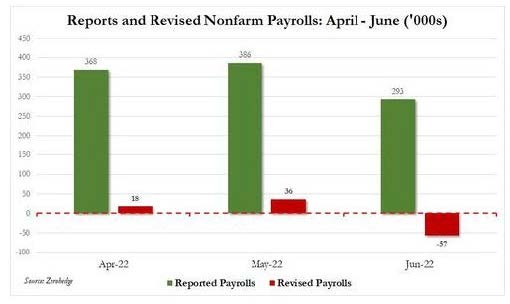 Why is all this important? Well, first off, you would like to be able to trust the numbers that come from the different government agencies. More importantly, there’s a group called the FED (heard of them?) that really needs to know exactly how robust the job market and the economy truly are.

Remember, the FED is raising rates in order to raise unemployment and lower inflation. But if the job market isn’t as robust as the BLS says it is, what’s the need for more significant increases in the FED funds rates in order to put people out of work? As we often say, “if you’ve won the game, stop playing!” In this context, if the FED has already pushed the labor market down sufficiently, we could argue it’s time for them to stop raising rates. Good data will allow them to know when the game is won.

We mentioned recently about the 7 million “prime working age” men who are not working, nor are they even looking for work. There is now a huge disconnect between the official unemployment rate and the actual unemployment rate. Remember, if someone is not looking for a job, they are not included in the unemployed statistic.

Here is the chart for Job Openings in the U.S.

You can see this has come down significantly since April. I’m not sure why some of those 7 million men are not coming back into the workforce to fill those positions.

Regardless, it still seems as if the FED is going to continue to raise rates until it sees unemployment go higher and inflation get down to 2%(ish). Especially with this new data in hand, their persistence doesn’t seem to make much sense to me, but that’s over my paygrade.

I hope you enjoy the holidays. Thanks for reading.