I have to be honest – my head is spinning. I’m not sure if it’s from breathing in too many smoke particulates over the weekend or the extreme sentiments we are seeing in the markets.

I’m going to go with market sentiments – one because it’s true and two because you wouldn’t want to read about my smoke-induced confusion. Whether you are bullish or bearish, you can find data points that bolster your case. Let’s look at a few. In the end, you may need a Xanax like me.

From the bearish side, here are some of the indicators supporting your beliefs.

The Shiller P/E (price to earnings) ratio is at extremely elevated levels and is only lower than the tech bubble and earlier this year in terms of how expensive the market is. Oddly enough, it sits roughly where the valuations were right before Black Tuesday during the Great Depression. If that doesn’t make you want a Xanax, nothing will.

The Conference Board noted that the 6-month Leading Economic Indicators (LEI) has touched a level that has historically been a warning sign and typically a precursor to a recession. But wait you say, aren’t we already in a recession? Well, maybe. We certainly had two quarters of negative GDP, but that doesn’t necessarily mean a “recession,” though many economists have used that as a definition. Regardless, it’s not a good thing. 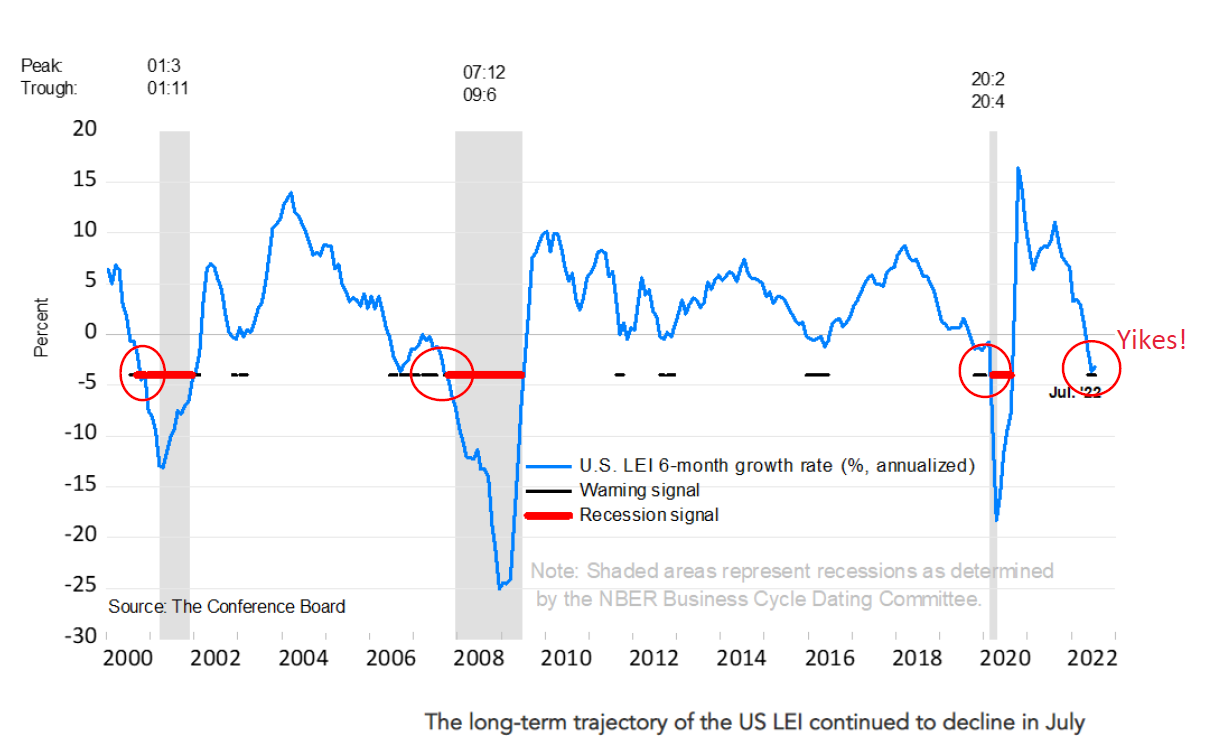 Inflation is at 40-year highs. 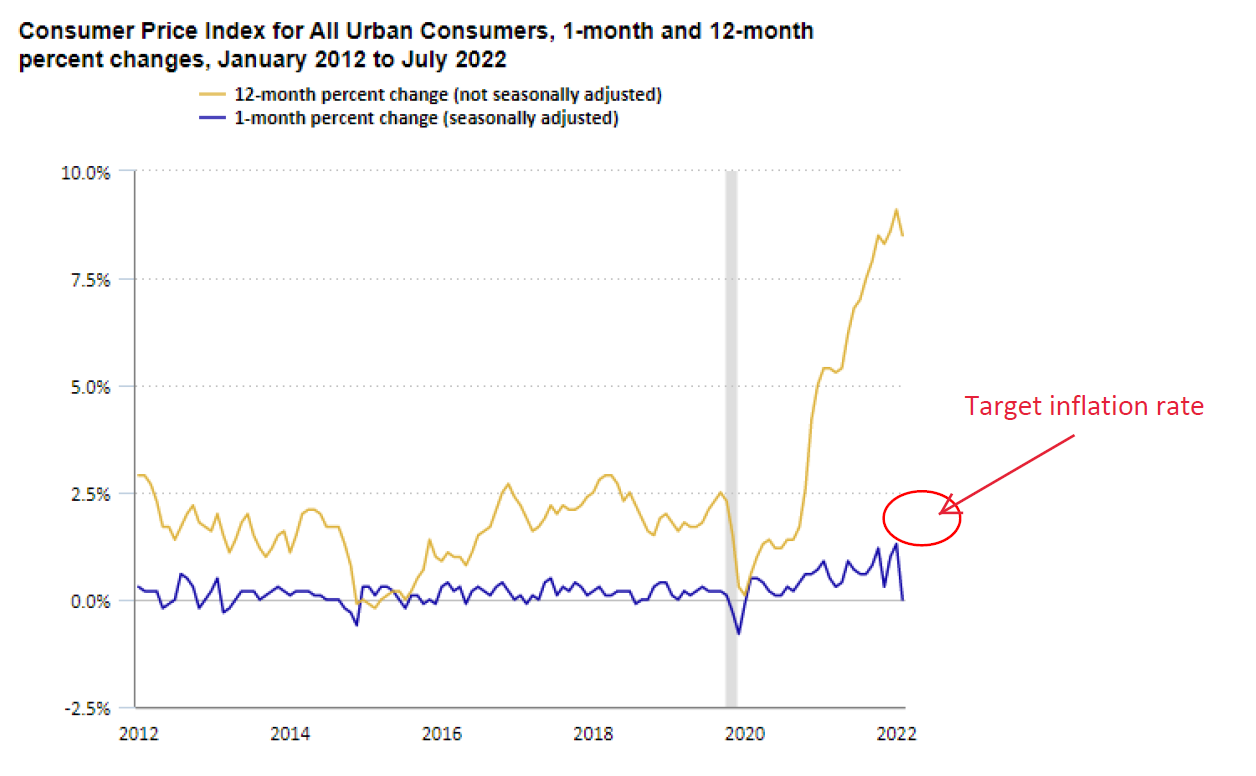 The Federal Reserve is now saying they will do nothing short of extinguishing inflation, as we discussed a couple weeks ago. Welcome to the party, Jay!

Finally, Consumer Confidence is near the lows during the COVID pandemic and subsequent lockdowns. 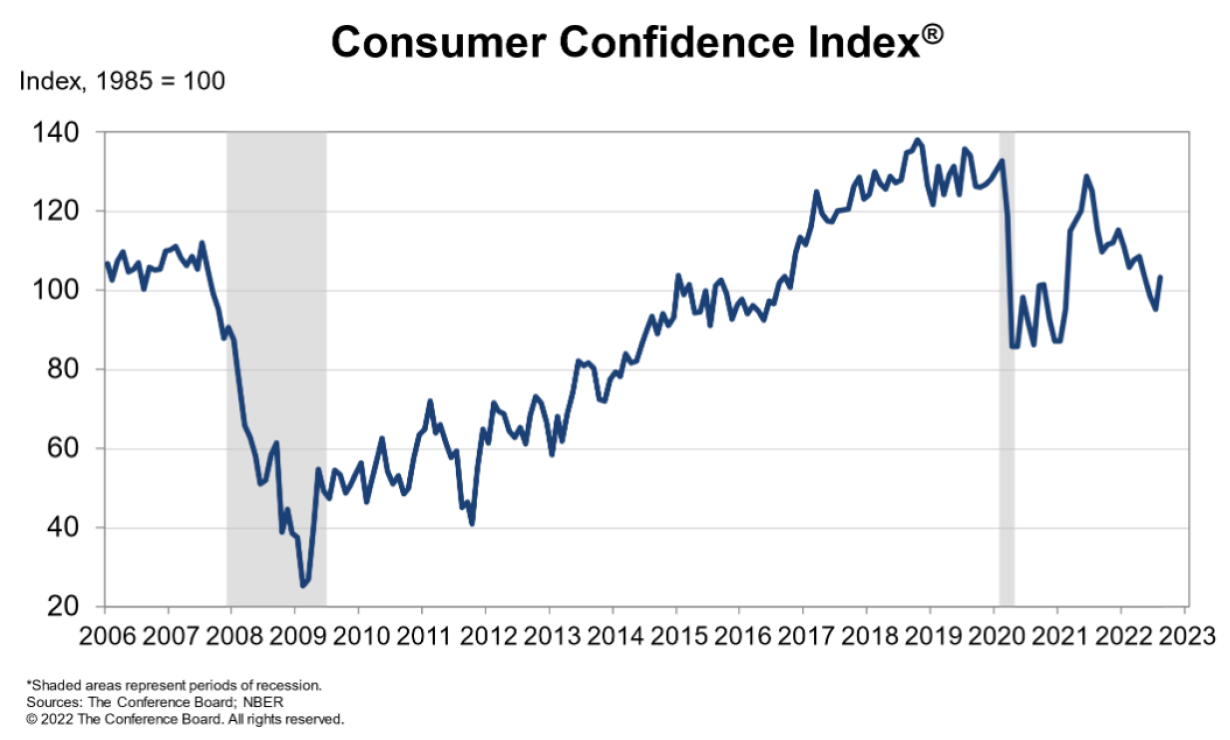 I could go on with many more reasons to hunker down, but let’s try to look at the other side and what we may be missing. Keep in mind, much of this is based on where we’ve been in the past and trying to draw conclusions from that.

First, let’s look at the AAII sentiment survey (we’ve shown this before). Remember that high bearish/low bullish readings are a contrarian signal that says the market risk is low and you could expect the markets to move higher from here. 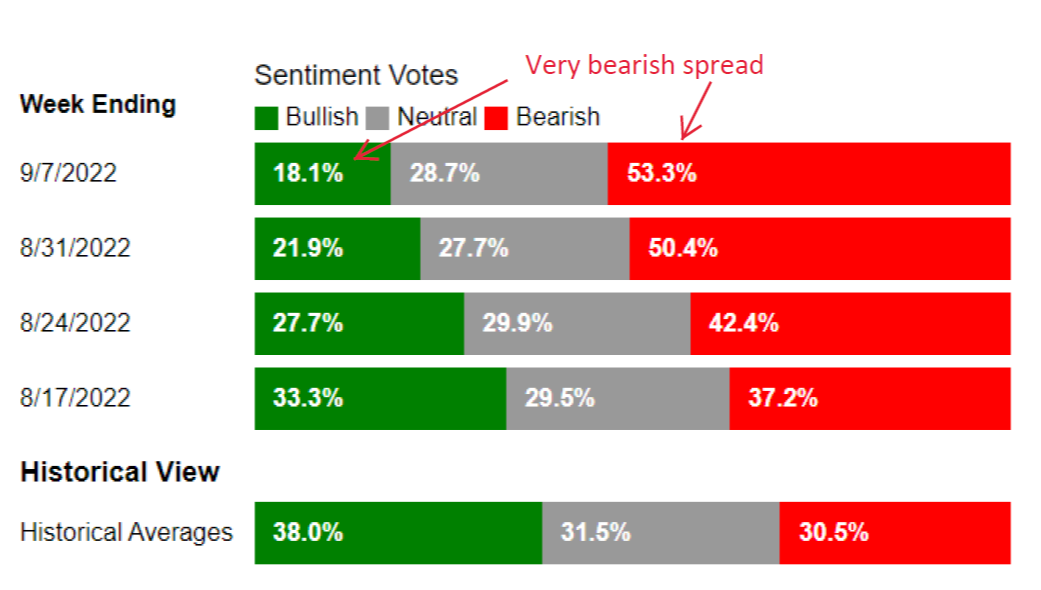 You can see that many investors are fearful of what is coming; we just looked at many of those reasons above. But remember, if the market already knows the information, it’s likely already priced in.

CPI data is due out tomorrow morning and the numbers are expected to show a slowing of the inflation rate on both a monthly and yearly basis. But is it enough? Here is one headline regarding that exact question.

The FED is scheduled to meet on September 21st, and they are expected to raise short-term interest rates by three quarters of a percent (0.75%). 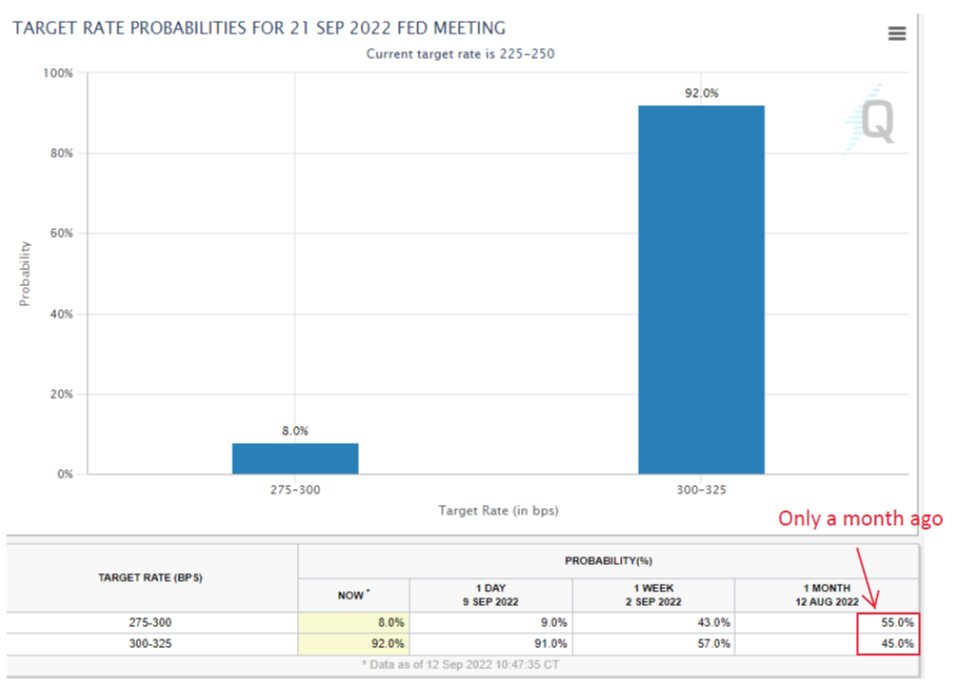 You can see the odds are greater than 90% of that increase, which would put us at 3%-3.25% short-term rates. That will clearly affect those with variable rate loans (like home equity loans discussed last week).

On the flip side, it also means that investors who are looking for fixed rate investments will have higher rates to choose from. There are always two sides to the equation. Higher rates from fixed income certainly should make constructing a sound portfolio that lines up with a good financial plan much easier.

Finally, let’s look at some data from our good friends at SentimenTrader. They do a lot of work sifting through the market undulations to glean a sense of where things might be going. Let’s take a look at some quite bullish data.

The first is looking at NYSE up volume versus down volume. 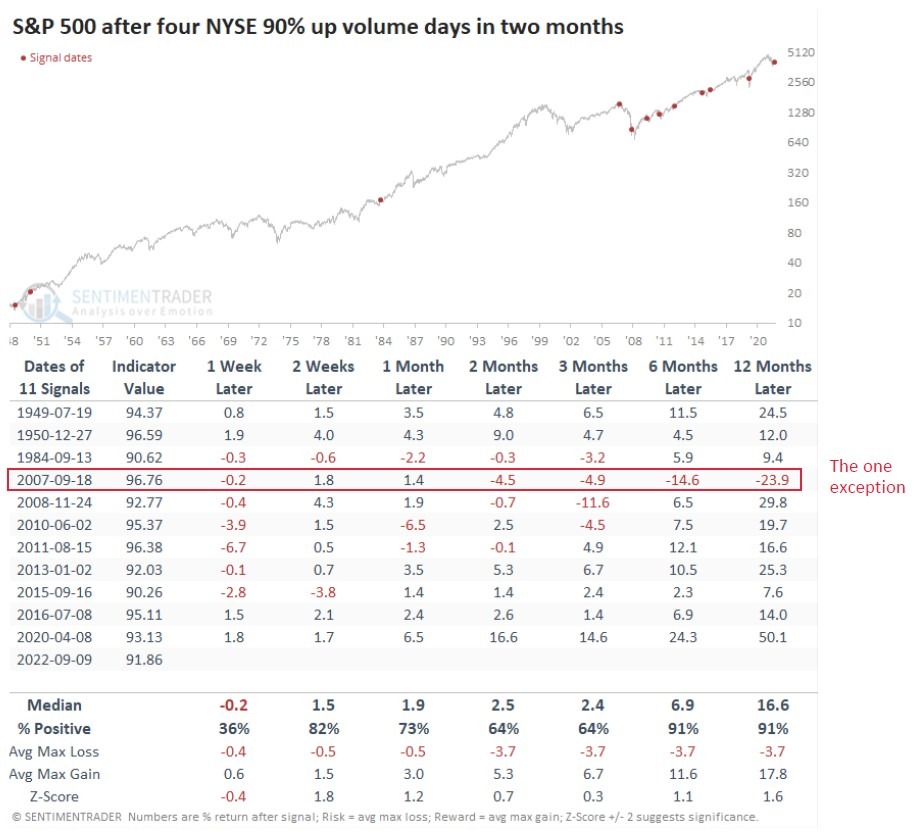 If we lessen the requirement to three 90% up volume days, we have 25 times since 1949 and of those 24 were positive a year later. 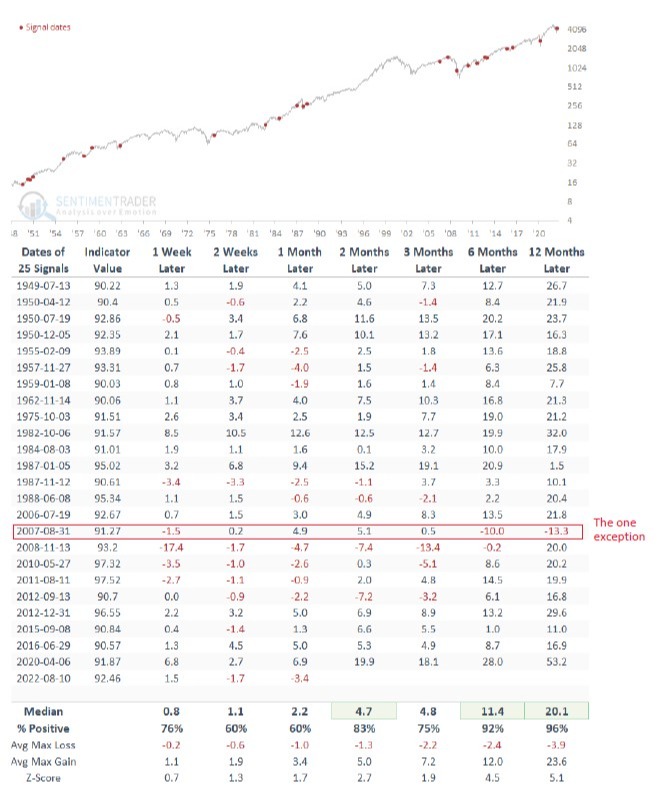 Finally, if we look at that last few days, we see a couple 90% up volume days, and the in-between day didn’t show big selling.  Here’s what happens when we have seen that in the past. 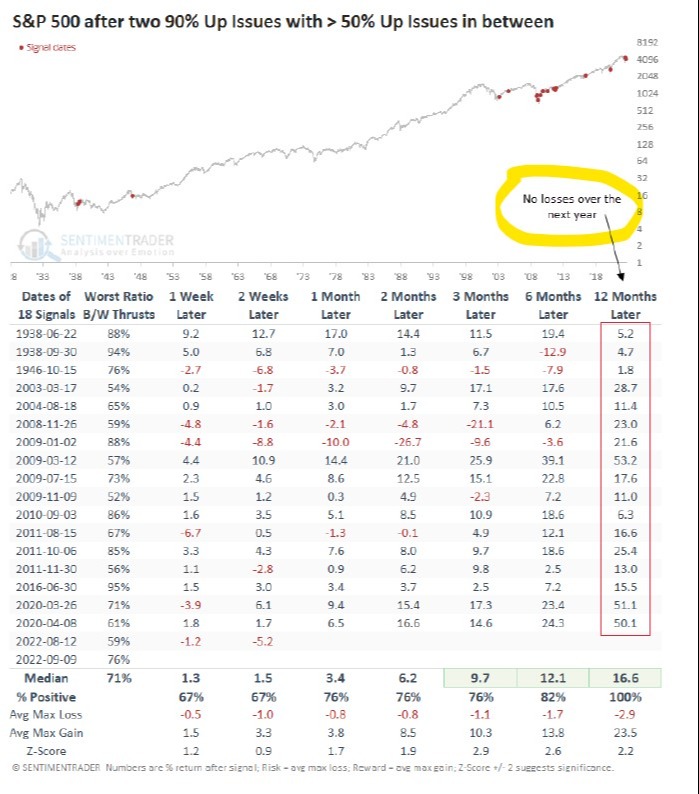 Every single time this has happened, going back to 1938, the markets have been higher a year from then.

So, let’s try to be objective and put it all together. I think the market is trying to guess when the FED will pivot and stop raising interest rates. Many investors are trying to get out in front of that, and I can understand why. At the same time, the chance for a policy mistake from the FED has gone up substantially since Powell’s speech in Jackson Hole.

As we have said many times, we expected inflation to start coming down by summertime. Our hope was that the FED would have enough data to be patient with interest rates and avoid raising them too far, so that in the process of extinguishing inflation they did not also put the economy in a recession. Right now, the messaging from the FED puts that hope in question, and that’s a concern.

A small recession is likely baked into the market, and if that’s all we get, most of the downside is in.  That would reflect what we are seeing in the SentimenTrader data above. If there is a policy mistake and the economy is slowed down too far, then we will likely see the one exception to the data above (which would be a significant slowdown and more downside volatility in the markets over the next 6-12 months). After prices have reset, we would likely see another bull market.

If inflation is not fully extinguished, we could likely see the Bullwhip effect referenced before, where the FED is forced to raise and lower interest rates based on how inflation is at the moment, meaning we could see wide volatility in interest rates over the next few years.

The truth is that no one knows exactly how this will play out, and so we have to position portfolios to withstand any number of potential outcomes.

That’s if for now. Have a good week. Let us know if you have any questions about the market or larger planning issues. Now back to reveling in the fact baseball matters in September here in Seattle – and is going to matter in October too!!!

Transitioning to things most people aren't so grateful for, let’s talk taxes. In today’s financial planning piece, we’re going to go around the horn and look quickly at a few emerging or important tax considerations as year-end approaches

I want to follow up last week’s blog with a broader look into the innovation space.  Before I do that, we want to wish you a Happy Thanksgiving. We all have so much to be thankful for, even though life may throw challenges...

It appears we have our first naked swimmer. What? Yep, don’t look.Ok, you may not know what I’m exactly referring to. Let me give you some background and set the stage.Everybody knows of “bitcoin,” but few...