Why do we continue to be ‘Cautiously Optimistic?’

For weeks now we have used the term “cautiously optimistic,” and we have fielded a few questions recently that leave us knowing that many of you are paying attention to this fact. What does this mean and why do we continue to hold onto this stance? We remain with a bullish tilt in our portfolios for several reasons.

Valuations are not particularly attractive. In fact, by most measures they are at the higher end of historical values. For those who are visual learners, the chart below illustrates this point. However, expensive can remain expensive and cheap can remain cheap for a long time. Simply put, valuations are not the sole reason that markets turn down (or up). It usually takes other things to turn sentiment. 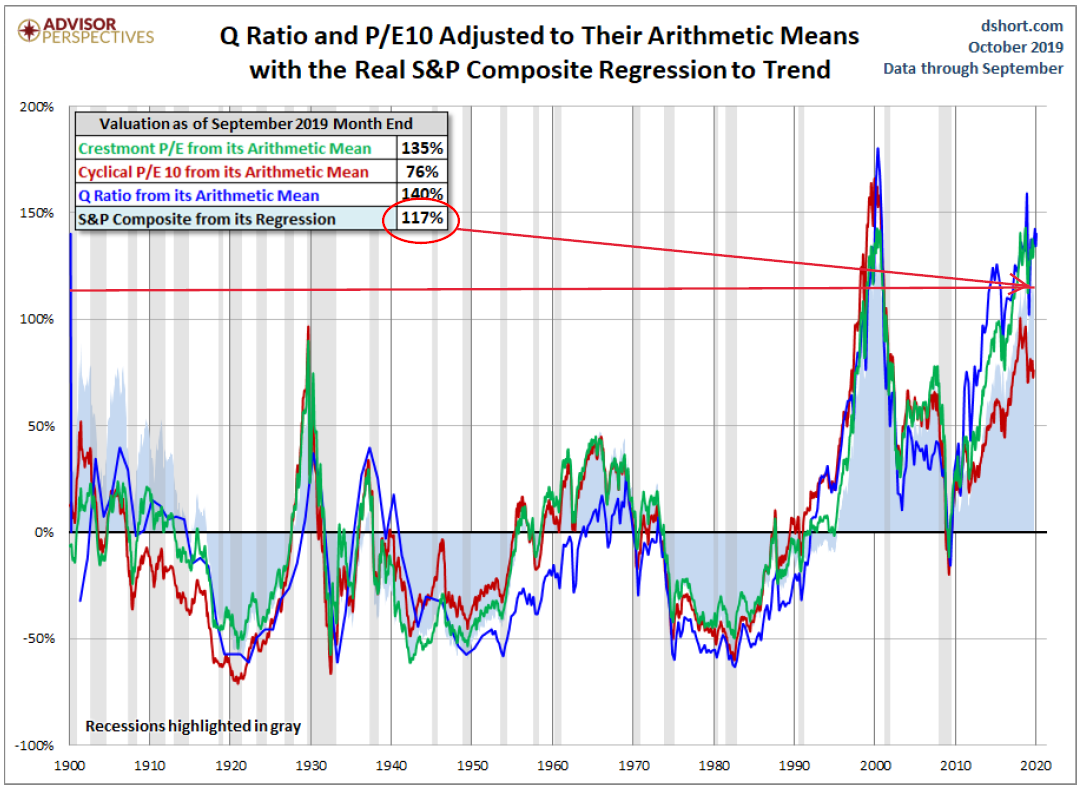 As it is, investor sentiment is already at very low levels and not displaying euphoric attitudes at all. This has been consistent for quite some time now. Given this, sentiment – at least at its current levels – is not likely to turn the market downward.

Monetary policy is getting easier. We noted last week that the Federal Reserve has not only reduced short-term interest rates but has also turned around to increase liquidity in the overnight lending markets. In fact, they have announced that they will continue their open market activities through at least January 2020. This could have been a big reason for the markets to turn around (which they started to at the end of last year when the FED changed direction). As it is, the FED has reversed their balance sheet moves and are now back to March 2019 levels.

Lastly, the trend is our friend. Even though the markets have moved sideways since the beginning of 2018, the trend also has not broken down and still remains in an uptrend. Until that changes, we have to be cautiously optimistic. Let me show you a great chart that I ran across Friday. This chart shows major news stories of the time and certainly reasons to not invest then. It’s crowded and hard to read…and that’s kind of the point, if you know what I mean! The moral of the story is that there is always a reason not to invest, and yet the markets over time tend to go up more than they go down.

That’s not to say the down periods are painless. It’s also not to say we shouldn’t try to minimize the downside effect on portfolios. However, we still have to keep a long-term bias toward investing. That is sometimes straddling a very fine line and we try to do that objectively on a daily, monthly, yearly, and in some cases multi-year time period.

So, while we all think our time is extraordinary and unique, every time period can say that same thing. Meanwhile, companies continue to figure out ways to invent new products and services, innovate and grow earnings. We have to have courage and conviction that the future will be better than the past, and that while at times politics, trade, and social headlines seem extreme (and they are), we will get through this and come out stronger on the other side. Unless this time is different…

Not as many charts this week, mainly because I have shown many of them over the last few weeks. We still remain cautiously optimistic unless something comes along to upset the balance right now.