The Federal Reserve just had their first meeting of 2022 yesterday and there weren’t many new insights.

Here’s what we know.

Unemployment is back to levels seen pre-pandemic.

Even unemployment for those without a high school diploma is down significantly.

There are more job openings than unemployed workers. 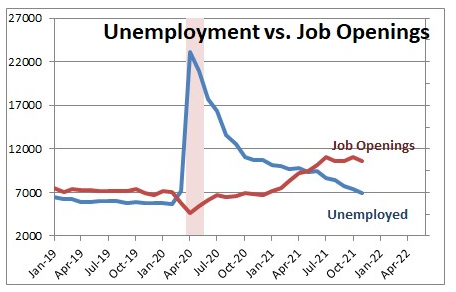 Inflation is at decades long highs (for now, more later on that).

With all that in play, it makes sense that the Federal Reserve would be raising rates, right? Remember their dual mandates from Congress – full employment and stable prices. Full employment is usually around 4-5% and we are at 3.9% headline number. Even if we look at the U-6 unemployment rate, it is all the way down to 7.3% (from around 23% during the pandemic). So the full employment box is checked. What then about stable prices? Well, from the looks of inflation, prices are not so stable. The FED’s stated goal is a 2% long-term inflation rate. You can see from that chart that we have been consistently above that number for almost a year at this point (since not long after they said they would allow inflation to “run hot” above the target for some time). This is why the FED wants to raise rates, AND THEY SHOULD!

But slow your roll for a second. These charts are in the past and only serve to tell us where we’ve been, not where we are headed. What were the biggest causes of inflation over the last year? As it turns out, energy prices (gasoline, crude oil and natural gas), used car prices, and new car prices. Wages have been a contributor to higher inflation, and we don’t think that element will be slowing much over the next year or two, barring a recession. Because the market looks forward, let’s look at those contributors of inflation and see where they are going forward.

Used car prices are starting to peak. Take a look at the Manheim forecast below.

You may hate me for it, but let’s pull out the calculus book. It’s time to look at the ‘rate of change.’ That is the second derivative of price. What? What happened to add, subtract, multiply and divide?  Anyhow, we are looking at that second derivative and that is starting to slow. Prices are still going up, but at a slower rate. And as Manheim forecasts, values may go up through spring, but they expect to see a normal market for used cars by the second half of 2022.

Remember, inflation is calculated on a month-over-month and year-over-year basis. Therefore, if used car prices are starting to slow the pace of increase, so too will this start to pull from the top line inflation number.

New car prices are affected by a few things, including – 1) availability to produce vehicles, because there will still be some chip shortages through most of 2022, 2) cost of credit, the more car loan interest rates are the less people can afford, and price and loans are already at all time highs, 3) values on trade-ins and the corresponding inventory on dealer lots.

Let’s take a look at part of the Manheim forecast on inventory levels.

So as price increases are starting to slow, inventory is also building. That is a recipe for lower prices. Unless there is a lot of pent-up demand waiting for cars to be built, we will likely see dealer lots start to fill up again over the course of 2022.

How about energy prices?

Here is the 1-year chart for natural gas. One year change is almost double what it was this time last year.

Crude is up 75% from a year ago. Do you think it will go up another 75% over the next year? I certainly hope not (while Elon Musk probably wouldn’t mind)!

Most forecasts for crude oil are somewhere in the $90-$110 a barrel, which from current prices would be an increase of 5-25%. That is still inflation, but at worst, it is only a third of what it was over the last year. Natural gas is forecast to remain in the $4 range for 2022. 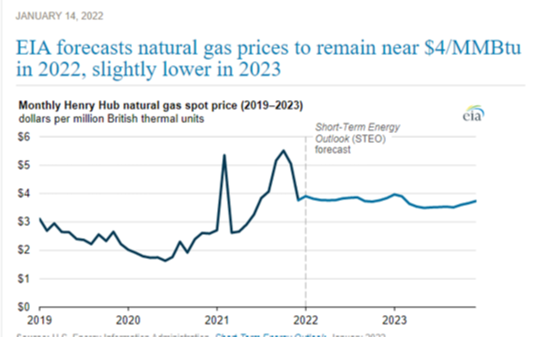 So as I see it, as do many others, if we look out towards the second half of the year, inflation is likely to be showing slower growth. See the chart below from Nancy Lazar with Cornerstone Macro, you can see she is projecting elevated inflation through the first quarter and then ratcheting down significantly toward the end of the year. 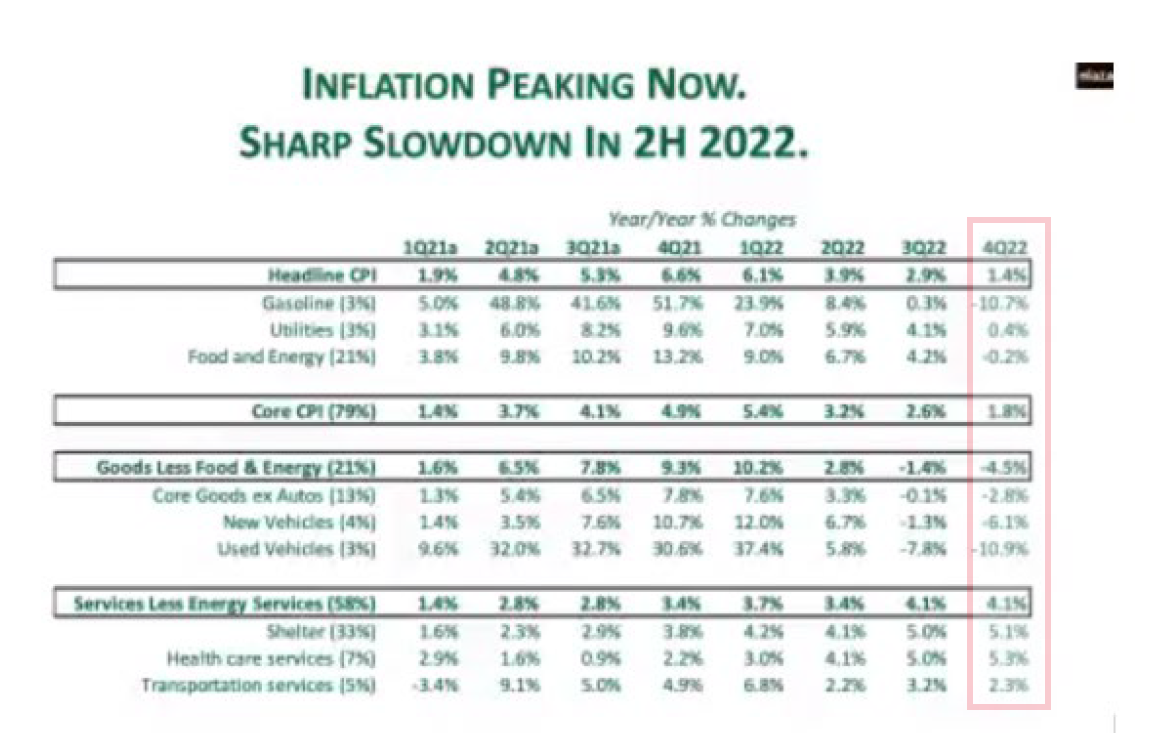 So, if inflation is going to simmer down and the economy remains relatively strong, what keeps me up at night? Not little children (sorry Andrew). What keeps me awake at night is that the FED is raising rates (to fight high inflation), just as inflation is peaking and starting to go down. What effects will those higher rates have on the economy? Of course, they will slow the economy down, because capital is just a bit harder to get and, if you can get it, it will cost you more as interest rates are higher. We believe the economy can withstand slightly higher rates. Our concern is whether the FED will push things too far. There’s always a breaking point, and it’s often hard to know where that point sits.

Here’s the punchline…the Fed is walking a significant tightrope. The economy is already naturally slowing down after being locked down and artificially held back from the pandemic. We had a reopening that put most people back to work. On the heels of these two realities, now the FED is potentially going to raise rates while the economy is naturally slowing. This creates a possibility of putting the economy in recession. That’s what we want to avoid!

Like I have said many times before, the FED continues to drive the car from one ditch to the other. This isn’t a knock on their intelligence or intent. I think it’s just a reality of human nature, as no one wants to be proactive in ending the party when the partying is good. After all, this party is about more than just a good time – it’s about people’s livelihoods, savings, and liabilities. The consequences are real and significant.  Are they going to manage to stay inside the lines this time? What do you think?

We have been in the camp that inflation is “transitory,” just not in the terms the FED was using (as in months). We think inflation will be above trend for several years, mainly due to wage inflation (but not at the 7% levels we’ve seen recently). If we take the above inflation assumptions, but look at 2023, you will see that auto inflation has mostly disappeared, energy prices have remained in that $80-$100 range (my guess) and that wage gains will be the primary reason behind slightly above trend inflation offset by productivity. No, we’re not going to see 1970s type inflation, although if you watch the news, that’s what it sounds like (fear sells).

The chance for a policy mistake by the FED is real and would have negative consequences on the overall economy, but they would likely change their posture pretty quickly (like the end of 2018) and resume an accommodative position if they see the markets get spooked. We’ll see how this plays out over the next couple quarters or so. Right now, the markets are like a 2-year-old – they want what they want and if they can’t have it they will throw a tantrum until they get it. What do they want? I’d say low rates forever and lots of money sloshing around. Liquidity tends to be good for the markets. Of course, there is such a thing as too much of a good thing for any 2-year-old.

That’s all I’ve got for now. January has been a rough month in the markets. Our models are pointing to potential changes, and we will always continue to be vigilant. Signing out of my Monday piece on Thursday 😊.