Where do we go from here?

Before we get into our regularly scheduled discussion about the world of finance, I have to tell you that I have a new item on my bucket list. Last year was the first year there was a Major League Baseball game played in the state of Iowa (originally scheduled for 2020 but postponed due to COVID), and it happened to be on the site of the movie ‘Field of Dreams.’ To think I was 20 miles from the field when I was riding across Iowa just weeks before the first game. Had I known then, I may have parked my bike for a few extra days and headed to the old ballpark. For those of you who haven’t paid attention to this, the property previously used for the movie was purchased by an entity controlled by Hall of Famer Frank Thomas, aka “The Big Hurt”.

Kevin Costner opened the inaugural game with his dedication. See below (both images hyperlink to videos on YouTube). 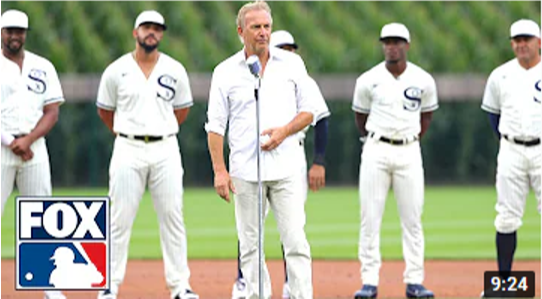 Only to be followed-up this year with perhaps the most iconic father and son players in baseball history. For those fathers, mothers, sons or daughters that still have a chance, go ‘have a catch.’ 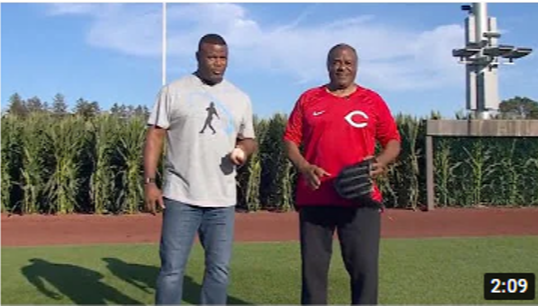 I’ll let you take a moment to compose yourself before we move forward. While you do that, I’ll be searching for tickets for next year’s edition!

Now that we got the seventh inning stretch out of the way before the first pitch, let’s get on with today’s game. The title of this is, ‘Where do we go from here?’ It’s an interesting question at this point. The economy is said to be in a recession (2 consecutive negative quarters of GDP) and the housing sector was just reported today to be in a recession.

75% of houses on the market are taking price markdowns and have you looked at your Zillow estimate lately? Good thing you weren’t spending the money you “gained” in your house over the last couple years. I would guess a good portion of that will evaporate in the next 12 months.

Leading economic indicators have peaked and are turning down. 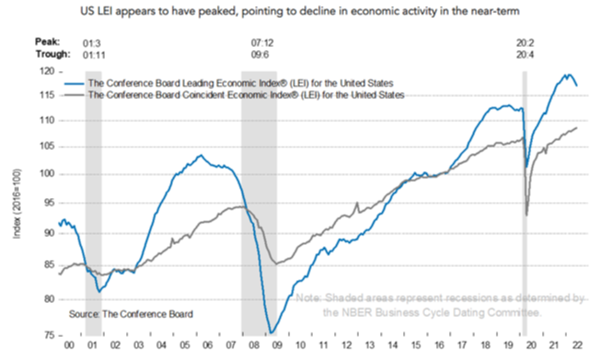 I have mentioned this before but used car prices have peaked and are declining. I’m even hearing about backlogs of cars going to auction that are not selling. Throw on top of that repos are now spiking as consumers are having a tough time keeping up with record prices and rising interest rates.

And the biggie, the yield curve is inverted (short end is higher than the long end). You can see below that the only part of the curve that isn’t inverted is the very short end of the curve (1 month and 3 month). Of course, that is very much influenced by the Federal Reserve and overnight lending rates. 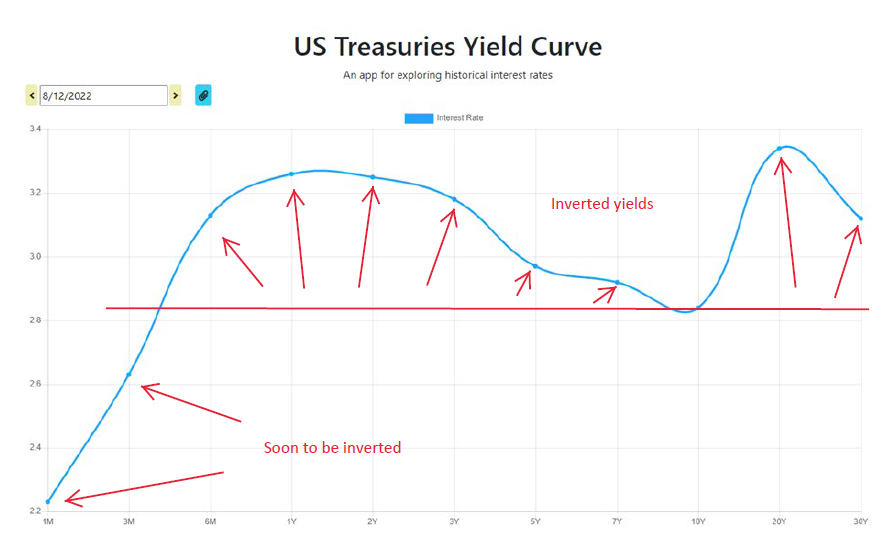 Wow, that’s a lot of bad news, right? Well, yes. But that’s already priced into the market. Like we’ve been saying for a while, if we have a modest recession, we have likely seen the worst of the market sell-off. If, however, we are in for a deep recession that may spawn other weaknesses in the economy, that would likely spell a much worse correction for the equity markets, as well as the housing market (basically all big-ticket items).

Turning to the bottom of the inning, we’ll now look at the other side of ‘where do we go from here?’ We told you our model flipped conservative on June 16th, but the technical picture told us the market was likely due for a bounce, potentially to the 200-day moving average. Well, as it turns out, we were right to not sell at the bottom and to let the bounce take shape. See the chart below. 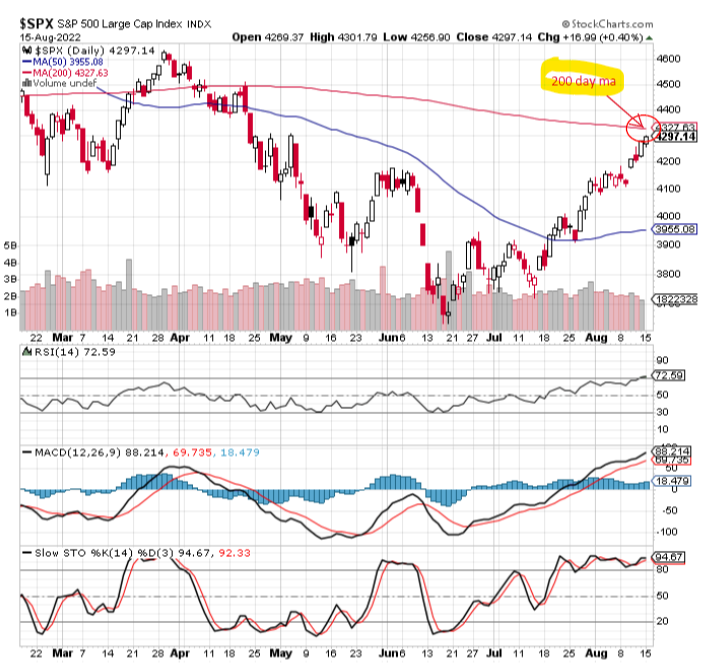 You can see above that the S&P 500 has moved up to the 200-day moving average and is now overbought. Of course, this creates its own set of problems. Does this bounce mean we are in a new bull market or is this just a bear market bounce? The real answer is nobody really knows and much of the answer relates to what the Federal Reserve is going to do with interest rates.  Your guess is as good as mine in that respect.  But let’s look at some of the technical aspects of the market. The S&P 500 continues to hit new highs on the A/D (advance/decline) line. That means that most companies are participating in the rally over the last month and a half. That’s good! 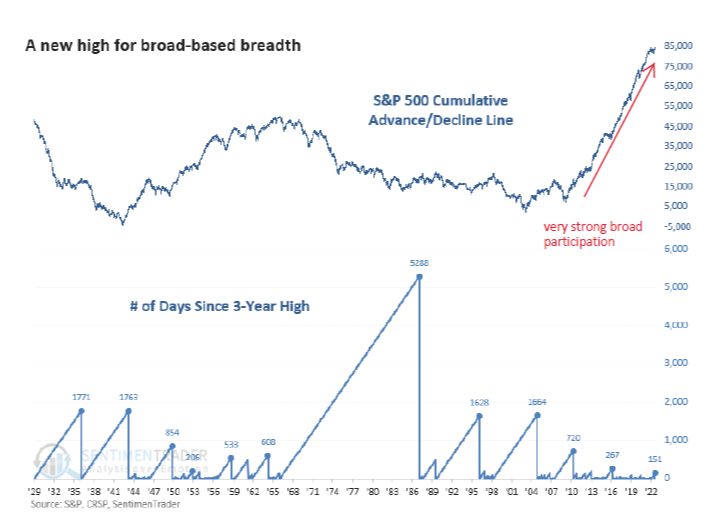 The number of stocks above their 50-day moving average has moved to 90%. That would typically be called a breadth thrust and is a very good indicator for the markets going forward. In fact, since 1997, there have been 13times this has happened. Below is the chart for how the market performed after such an event occurred. 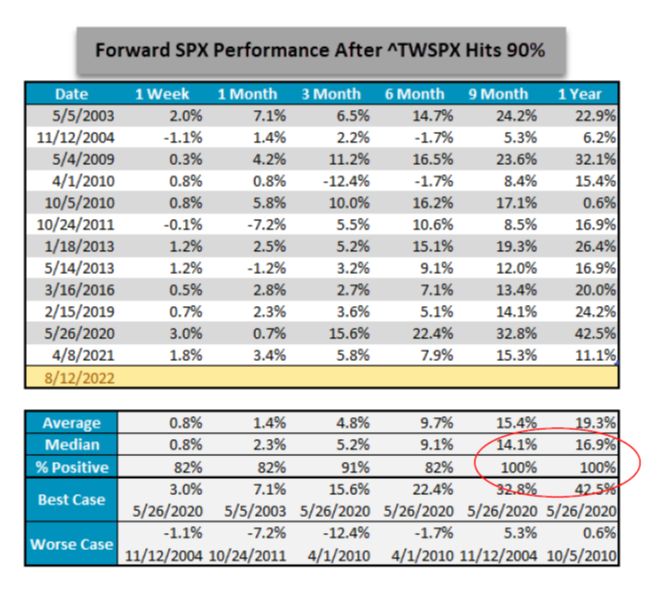 You can see that when you look out 9-12 months the markets were positive 100% of the time and better than 80% during shorter time periods.  That’s a pretty good record, right? Now that’s certainly no guarantee that this market will play out like that, but if history is any guide…

And finally, our model has now flipped back to partial risk on, as US stocks have moved into the second place again, edging out cash and quickly closing in on commodities.

To reiterate, our model is a trend following model. It looks for trends and compares these five asset classes above to see which are the most favorable relative to the others. Giving the technical part of the market time to catch up to the relative strength has allowed us to have a better exit point if that’s how it plays out or stay in the market if most of the bad stuff is behind us.

We know that market pullbacks are not fun, but are a necessary part of investing, and a certain amount must be tolerated to meet long-term goals and outpace inflation (with risk comes reward). So where do we go from here? We will be keeping a very close eye on the technical and fundamental picture for early signs that this recession is more than a garden variety one. We’ll keep you posted.

Reach out if you have any questions about the market of larger planning issues. We’re happy to chat! Otherwise, have a great week…and Go Mariners!