Where are we headed from here?

As a frequent reader of this blog, you know that I am no fan of the Federal Reserve. You know, that “independent” financial arm, sandwiched between the US government and the large financial companies. Its mission is to maintain full employment and stable prices. The tools it has at its disposal are interest rates and money supply, broadly speaking. Both of those can act separately or in conjunction. But either way they are blunt instruments. Ever see the tools a finish carpenter brings to a job? Hint, it’s never just a hammer and level. While powerful and useful, these tools do not allow for the kinds of precision the job requires.

Like a carpenter armed with just a hammer and level, the problem with just having interest rates and money supply in your tool belt is they don’t directly affect the problems that they are trying to solve. They can influence them, but that’s the best they can do. For example, if unemployment is high, they can lower interest rates to encourage borrowing so that businesses and consumers buy more on credit (where they might otherwise not buy if rates were higher). Buying creates more revenues and (hopefully) more profits which can then translate into more jobs (it not the direct route for sure).

I’ll add that unlike my rightful displeasure if a finish carpenter shows up to my home with only a hammer and a level, I can’t necessarily be mad at the FED for only having two blunt tools in their belt. Instead, I just need be mindful of this reality. As an investor, business owner, homeowner (or buyer), Target shopper, vacation planner…you name it…I need to understand what they can and cannot do, so that I can try to understand the broader economic landscape properly. So let’s look at what they’re up to now.

We know the FED is raising interest rates and pulling money out of the system, with the effect of slowing consumption and reducing demand (and therefore inflation). As we know, this problem is as much about demand (government stimulus) as it is about supply (COVID supply chain issues). Neither of the FED’s tools can do much about supply, so they are busy trying to attack the demand side. Their thinking is that if demand would come down (which it is) and supply can catch up (which it is), inflation will come down.

In general, that’s a decent line of thinking. But let’s not forget that much of the inflation is rooted in energy. Energy that is persistently high and will likely stay high until the FED kills the economy (if it does) or Russia leaves Ukraine. We’ve mentioned auto prices. Those are starting to come down. The housing market has hit a brick wall.

That doesn’t look bad, at least from a headline perspective, but take a look at the details below. 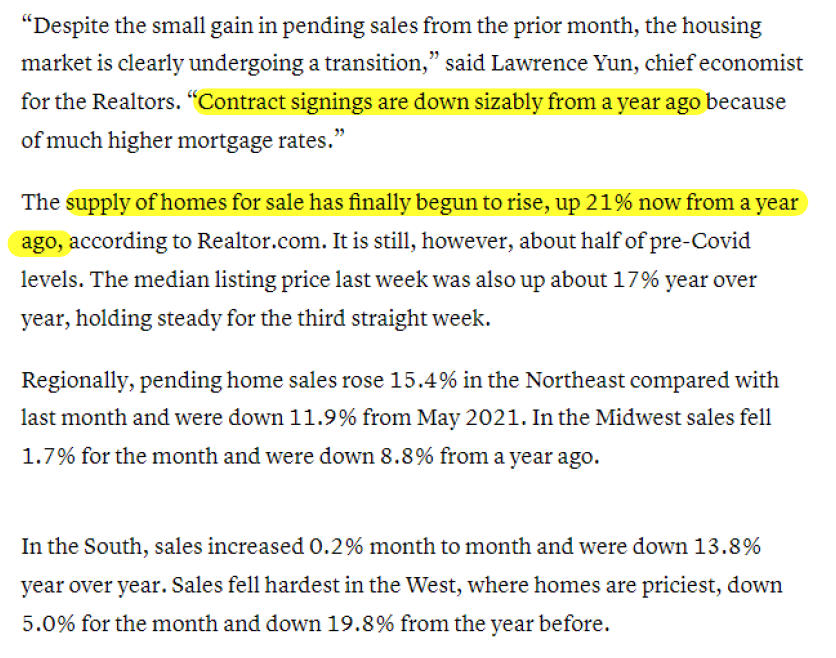 Supply of homes for sale is up 21%, while pending house sales are down significantly from a year ago.  What does it mean when supply goes up and demand goes down? Hint, something has to happen with prices…

Below is a chart (updated April 2022) that shows how many showings houses are having. The base for this is January 2014, so you can see that showings are more than double where they were in 2014 (most of that is due to Millennials buying houses). 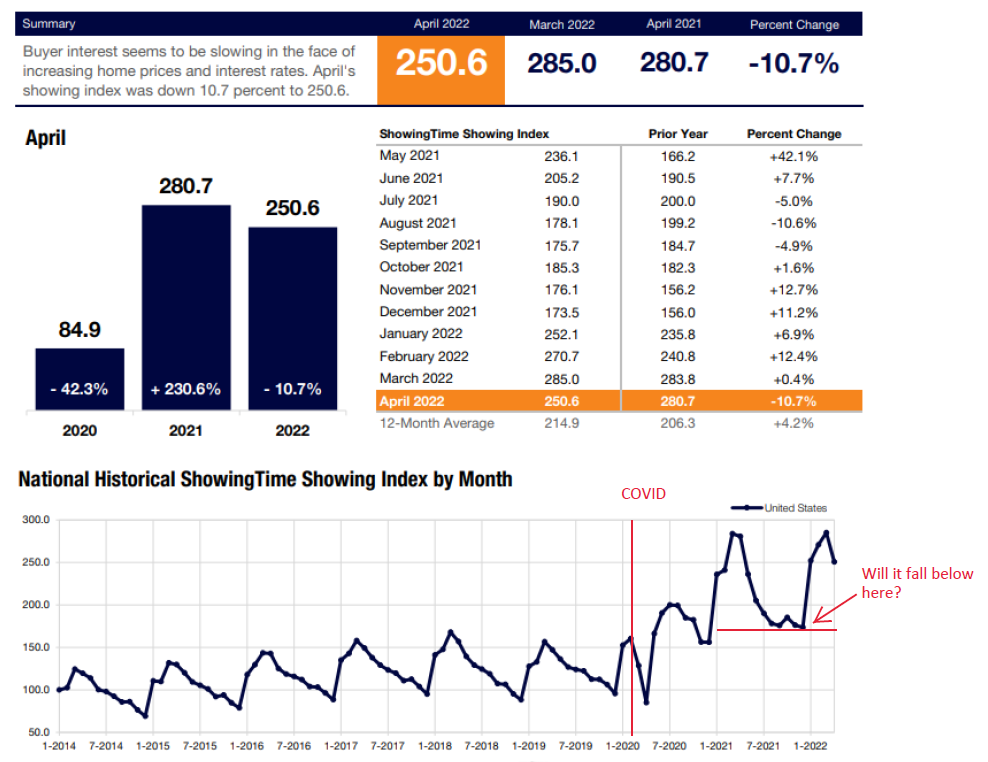 It will be very interesting to see what May and June look like. Since I don’t have a subscription to Showingtime, I can’t get up-to-date information, but the numbers for June should be terrible. We know the mortgage market has been crushed the last few months, so we will keep an eye on this indicator of home sales.

We’ve looked at the 10yr/2yr treasury spread as an indicator of how the market feels about monetary policy. When the 10/2 goes negative, the bond market is saying we should expect a recession to follow. Today we are at a positive 0.09 (ever so close to going negative, which the market did on April 1st).

But how does the market feel about interest rates and inflation longer-term? We’ve shown this chart before, it shows the expected 5-year inflation rate, 5 years in the future.  It looks pretty benign. Pretty much in the middle of its 10-year band.

So, with rates hovering near the middle of their longer-range bands, the 10/2 year nearly inverted and the Federal Reserve really starting to get in gear (with their blunt instruments), the question is where do things go from here? Demand is falling off a cliff for big ticket items (durables). I noted RV sales last week, homes this week. Even oil and energy prices are playing nicely with others (see charts below). 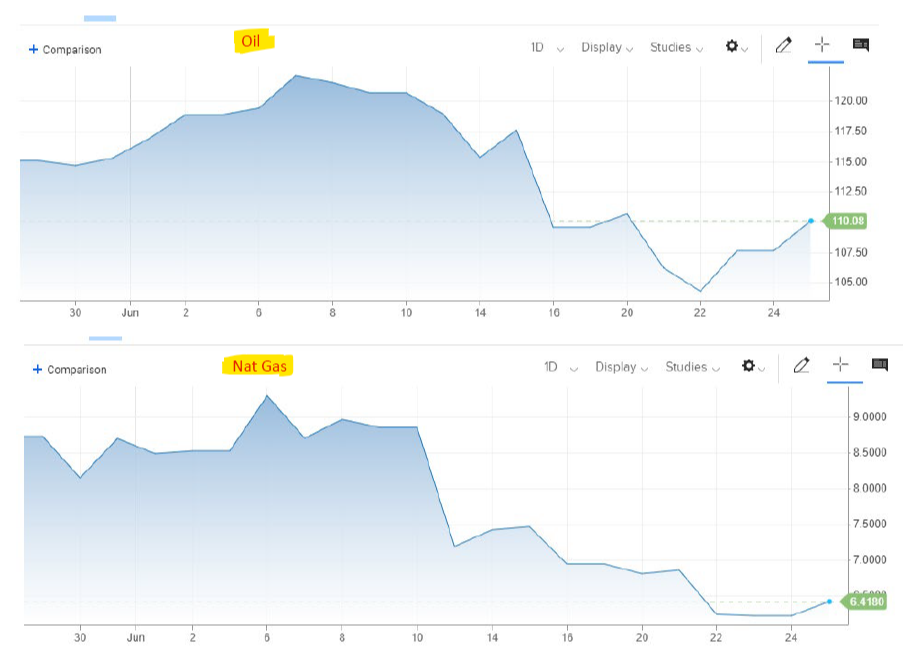 If we can keep commodities from continuing to run higher, we can start to see a peak in inflation. If you remember, earlier in the year, we said that we believed by summertime we would start to see inflation come down.

We are certainly seeing demand come down, and prices will likely follow as China opens back up.  Remember, Shanghai was shut down for a couple months due to COVID. Opening up such a major economic hub will certainly impact the global supply/demand dynamics. 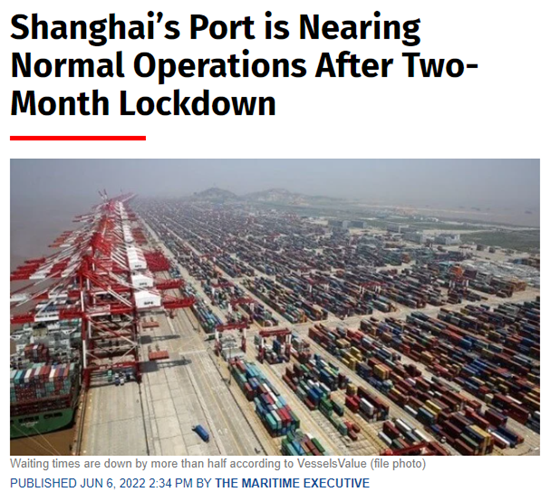 The only question left is how much will the FED raise interest rates? The market has priced in another 75 basis points for the July meeting with an expected year-end FED funds rate of 3.25-3.75%. I’m no math major, but if short rates are ~3.5% for the midpoint and 10-year rates continue around 3.2%, that seems like the curve would be inverted. Will the FED purposely invert the treasury curve?  If you ask Bill Ackman – the hedge fund manager notorious for “talking his book,” he thinks the FED will raise rates to over 5% next year. WHAT!?

If you want my opinion, and who doesn’t, I think they should focus more on selling their longer dated treasuries and mortgage-backed securities. That will put pressure on the 10-year treasury and will slow home prices and larger purchases, without inverting the yield curve. Buy hey, I’m not a billionaire, so what do I know?

To end this, here is a look at our model. We have said that it has been on the edge of flipping to conservative. Well, it’s flipped.

You can see that Cash is now our second most favored asset class with Commodities number one. The market is oversold on so many metrics and we think we will get better prices to rebalance to a more conservative portfolio, should the data continue to warrant such a move. One fly in the ointment is that our money flow model is seeing HUGE divergences and is another reason we are holding off making these changes in the very short run.

Could this all be a huge head fake? Sure. If the FED does a 180 and starts to ease, then we will see the bubble start to inflate again. With inflation as high as it is (even though it’s peaking), I think we are likely to see the FED continue to raise rates at least through September (and then who knows). If inflation is still uncomfortably high, the rate increases will continue until something gives.

That’s it for now.  Have a good week and please do reach out with questions, comments, or concerns.