What is Bitcoin and should I be invested in it?

Jeff is in Miami this week for a yearly compliance conference (tough to be there now, I’m sure). I (Chris) will be sitting in for this week’s commentary – and I’ve decided to elaborate on a topic that is third only to religion and politics in its current ability to stoke a heated discussion – Bitcoin.

We have had a few clients ask about Bitcoin over the last couple months, more to ask what it is and less about investing in it.  We are conservative by nature; many of you are close to or in retirement and are conservative with regards to your investments as well. That said, even before clients were asking, we were asking these questions ourselves, and have spent considerable time poring through research, reading commentaries, and talking with experts in order to understand the technology and the investment opportunity.

So does this mean we shouldn’t buy Bitcoin?  I think we should know what it is first.  When you look at any article on the web regarding Bitcoin, you will typically see a picture of a coin – something like this:

The truth is, there is no such thing that exists. No actual coin, nothing tangible that you can put your hands on (unless you are talking your online “wallet” to store these “coins”). But since most of us are visual in nature, it is easier to understand Bitcoin as some sort of actual coin. LET ME REPEAT, THERE IS NO COIN THAT EXISTS, they are virtual and exist only in bits of data.

So now we know what it’s not, what is it?

Simply put, Bitcoin is the monetary valuation for what is called blockchain or distributed ledgers. As of November 27, there were 1324 different cryptocurrencies (or digital currencies), like Bitcoin. Bitcoin happened to be the blockchain that started this whole thing and is the most well-known, but certainly not the only one. According to Seattle based Pitchbook, there has been $4.5 Billion invested in blockchain private equity (as of September) and an additional $2 Billion in new “token” sales this year. As you can see, there is a lot of hype with people trying to figure out which will survive and which will disappear (along with the money invested). Below is a chart of the major bubbles that are most commonly referred to and where Bitcoin fits. 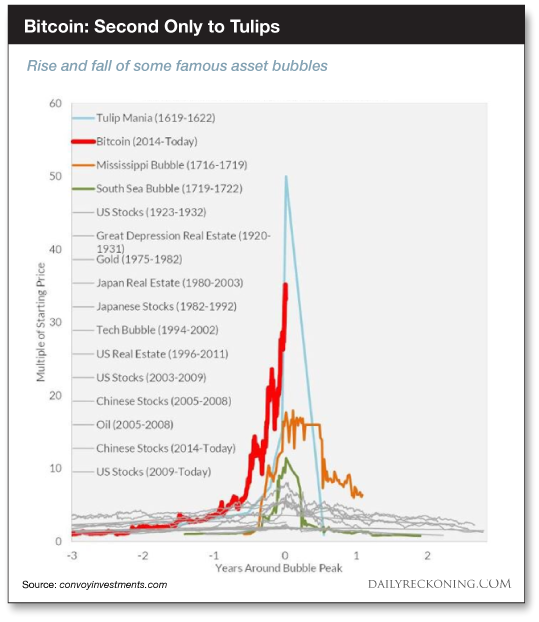 What is a blockchain or distributed ledger? Think of how Visa processes a credit card charge. When you present your credit card to a merchant, it scans the purchase in the system and Visa verifies and validates that you have the credit to be able to buy whatever it is that you are buying. That is a verification and ledger system that is owned, operated and controlled by Visa. A distributed ledger is not controlled by one company, but by millions of computers on the internet that verify and validate a transaction in Bitcoin or some other internet currency of choice.  Once the transaction if verified, it is put in a block with other transactions and then forms a “blockchain.” If Visa goes down, then no transactions are processed, and you can’t use your card. If a computer or group of computers go down in the blockchain, the system will still process as normal (thus distributed ledger).

450 words just to explain what Bitcoin is and isn’t, can I just get to whether we should invest in it?

Bitcoin, as of this writing, is trading at $11,329 – up 1260% for the year. Who wouldn’t want to invest in that? Ideally everyone, right? Caveat: don’t invest more than you are willing to lose. Why do I say that?  Bitcoin and all the other cryptocurrencies are very risky, not backed by anything other that the network that serves them and could and will likely have major drops in the price. For those of you that might play blackjack or poker, the old saying If you walk up to a table and you can’t spot the sucker, guess what, you are the sucker.

One of our jobs is to make sure our clients are not the sucker.

All that being said, we are big believers in the blockchain and distributed ledgers and we believe that this technology is revolutionary rather than evolutionary and will change many industries in the future. Whether ultimately Bitcoin is around and the winner is hard to tell.  Think back to the internet bubble in 2000. Most of the companies of that era are not alive today – but the underlying technology continues to grow and thrive. I would say that most of the 1300+ cryptocurrencies today will not be around in five years.  Will Bitcoin be a survivor or will it be overtaken and replaced by a new blockchain?  Only time will tell. Until then, Caveat emptor.

During times like this when markets (both stocks and bonds) are falling at historic rates, interest rates are spiking, and the economy is on uncertain footing – we field a lot of questions about what’s next. What’s...

Is it possible Mr. Market got ahead of itself?

Mr. Market loves to forecast a recession. This time is no different. But not every time the market thinks there will be a recession, there actually is one. So, is it possible that the market is overly pessimistic about the economy?...

As we look forward to the FED meeting on Wednesday, the evidence continues to build that the economy is in a precarious position. High inflation, slowing growth, rising interest rates, and low unemployment. Something must give.Slowing...