What happens when mortgage rates go up?

“Skate to where the puck will be” is a great quote from hockey legend Wayne Gretzky. It’s as true in hockey as it is in the markets or life in general. Many times in the past we’ve said, if you invest based on what you read in the newspaper (or now on the internet), the information you are reading about is already reflected in the price of stocks.

The exception would be something like COVID that comes out of nowhere. When these surprises hit, prices then reflect real time, and you get a big reprice up or down. Housing is no different, although I can say that if you told me we would have 25% unemployment at the peak of COVID and that house prices would go up over 20% nationally, I would not have believed you. Those two things seem incompatible, and yet they happened. Of course, many of you know why. The Federal Reserve and central banks around the world flooded the system with cash and most governments also added fiscal spending and transfer payments during that period.

Anyhow, in the spirit of skating where the puck is going, I’d like to work through a mental exercise. The general question is, when mortgage rates go up (and stay up), what happens to housing prices? The same exercise can be performed for stocks and bonds as well, but I’ll try and keep this to a 2-hour read. 😊

Mortgage rates are generally correlated to the 10-year Treasury rate. As that benchmark rate goes down, so does the mortgage rate (all other things staying the same). Take a look at the chart of the 10-year below.

For those of you that were buying houses in the 70’s and 80’s, you remember mortgage rates in the teens. Why? Because the 10-year treasury was over 10% for a good portion of that time.

Next is a chart of the housing price index put out by Case-Shiller.

You can see the 20%+ increase since COVID from the last gray vertical bar to the current price. You will also notice that the Housing Price Index stands at all time levels and significantly above the peak in 2006/2007. Below is the Housing Affordability Index for the last year. The higher the number, the more affordable housing is. You can see that housing has become less affordable in the last year. That should come as no surprise, as housing prices have continued to climb. It should also not be a surprise that housing on the west coast is the most unaffordable and in the Midwest it is the most affordable.

Keep in mind that Housing affordability is based on monthly payments, so if rates go down (which they have), that allows prices to go up and monthly payments stay roughly the same. But I’m interested today in what happens when rates go up.

So here you are, about to buy your first house. You’ve saved your 20% down payment (or 5-10%, as is more common these days) and you make a decent amount of money (and expect that to continue). Put those together, and you surmise that you can afford your first house. In addition, you’ve secured a very attractive interest rate. 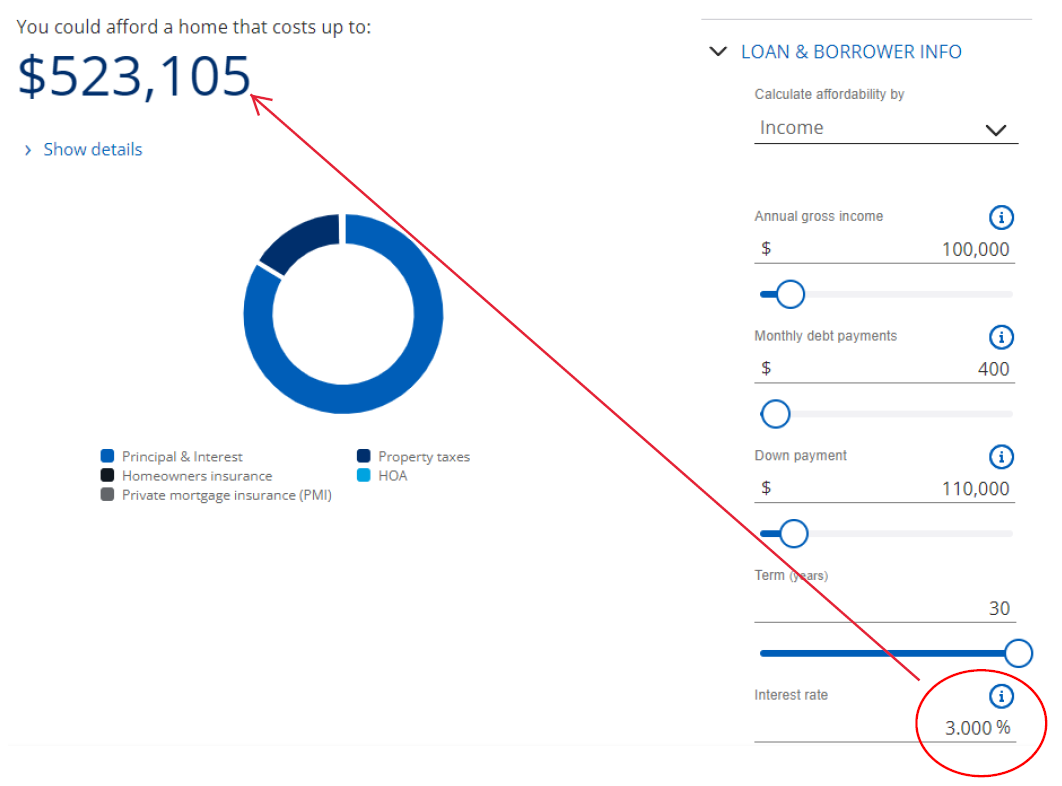 Now, nothing changes except interest rates go from 3% to 5%.  Let’s see how that changes your affordability. 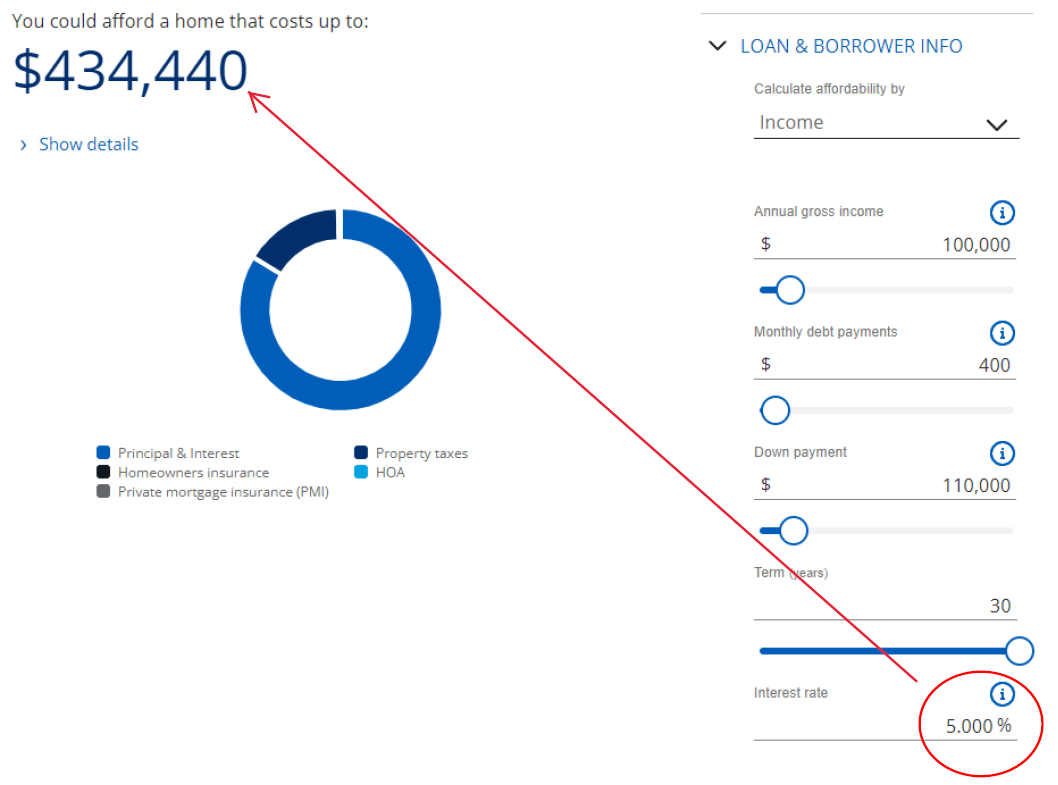 So again, we are skating where the puck will be. There are two scenarios that I would like to explore.

First, rates have gone from 3% to 5% and that lovely house you bought for $523,000 is now worth something less than what you paid for it because there is now less competition as less people can afford that price for your house. With the higher interest rate, that $523,000 house will now cost a new buyer $2,560 per month, a 23% increase in your payments.

Second, you have lived in this house for many years and now you have children and lots of stuff you didn’t have years before and you need a bigger house. But you are locked in to a 3% mortgage now and somehow getting a new mortgage for 5% doesn’t seem palatable to you. Now you are forced to give up that 3% mortgage that you may never see again or stick it out in your current house with less space than you ideally need (or you call the contractor and overpay for a remodel!)

That’s a choice most of us have not had to make in the last 40 years. Anyone under 70 has really only seen interest rates go in one direction, DOWN.

The good news, assuming wages stay the same or increase, is that affordability will come down as price comes down, so it’s not a single factor equation. The point of this whole exercise it to see what could happen when (I do think that’s a WHEN, not IF) rates normalize. I also don’t think a 3% 10-year Treasury is a crazy notion, potentially even higher from time to time.

On a side note, if mortgage rates go up because Treasury rates go up, what happens to the cost of debt for that $29 trillion we referenced last week. I’ll let you skate there on your own! Just do it from a comfy chair with your favorite beverage in hand.

As always, have a good week and we welcome any comments or questions.