Up in Flames...Or Maybe Not?

In case you missed it, half of the Saudi Arabian oil production literally went up in flames this past weekend. What subsequently went up were oil prices, at one point to the tune of about 20%. Seems like a lot, but we’ll argue the shock to the system now is so much less than it would have been just a few years ago. Not long ago, these same flames would have likely sent portfolio balances up in flames – but today the markets closed down less than half a percent (as measured by the All-Country World Index). What changed?

Last week we talked about the uncertainty of the future. Oil prices are one example, and an important one at that. We have seen the price of oil in a pretty wide range over the last couple years, trending down in the last five months after hitting an intermediate high in April 2019. Then we have the drone attacks on the Saudi Arabian oil fields over the weekend. With 5% of the world’s daily production suddenly offline (though apparently not for long), prices shot up by almost 20% at one point over the weekend (currently up about 15%).

We know lots of people have lots of different opinions of oil and fossil fuels in general, and we can have that discussion at a later time. Suffice it to say, had the events of this past weekend happened anytime in the last 100 years prior to 2010, we would have likely seen oil prices spike much higher and cause a much greater concern for a global economic shock (“black swan” event). Today, while this could still be a problem, I would like to show you a couple charts demonstrating why it’s not as big an issue for your portfolio and for oil prices as it would have been otherwise.

What happened in 2010? Well, actually starting in 2005 oil drillers in the U.S. started using a technology called hydraulic fracturing (more commonly known as fracking). Not to get too technical, it’s basically a process to remove oil and gas trapped between layers of rock or sand (depending on the field). You can see in the natural gas chart below that a large increase in production began around that time and continues to expand rapidly. It’s had a number of impacts – not just that many houses in the U.S. are heated by natural gas, but also that many electricity plants have converted from ‘dirty’ coal to a much cleaner natural gas. Since the production is up so much from that time to today, we have seen prices remain relatively subdued (the whole supply/demand curve at work). 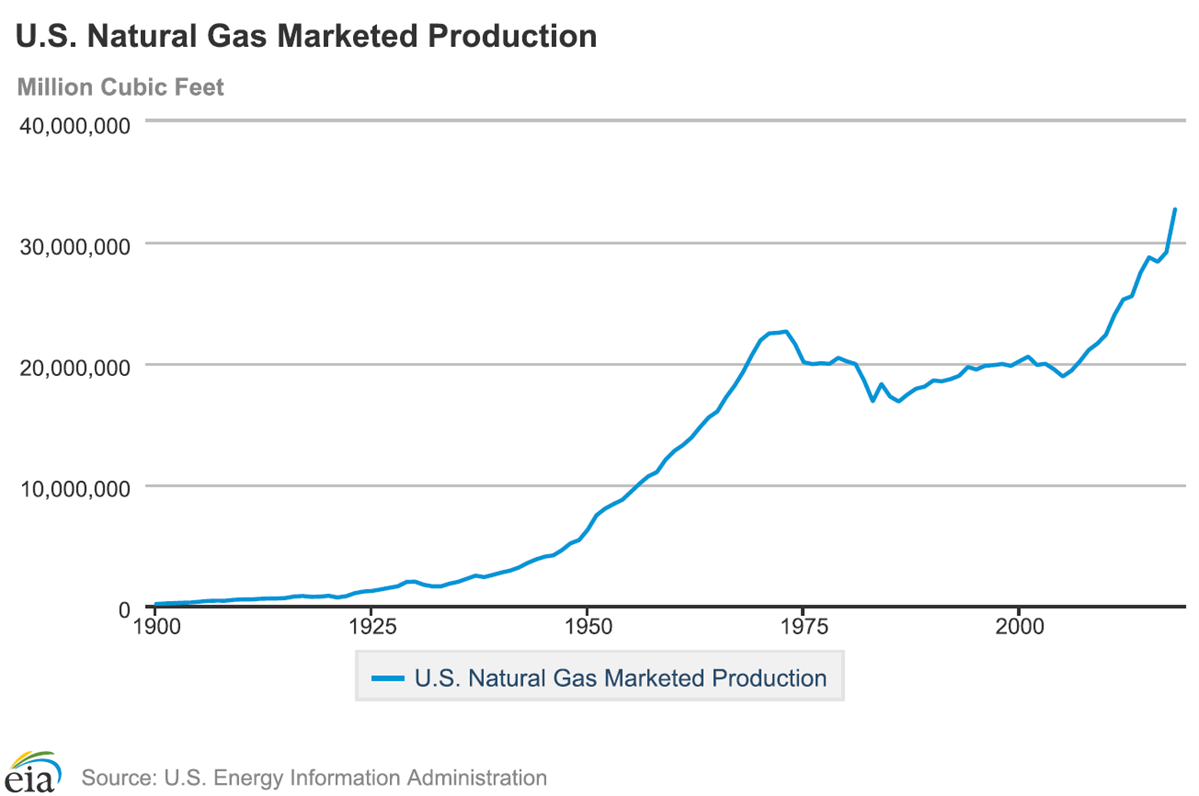 If we look at oil production, we see that hydraulic fracturing didn’t really ramp up until around 2012. Now the U.S. is one of the largest producers of crude oil in the world. You can see that we are producing more than we have in many decades… 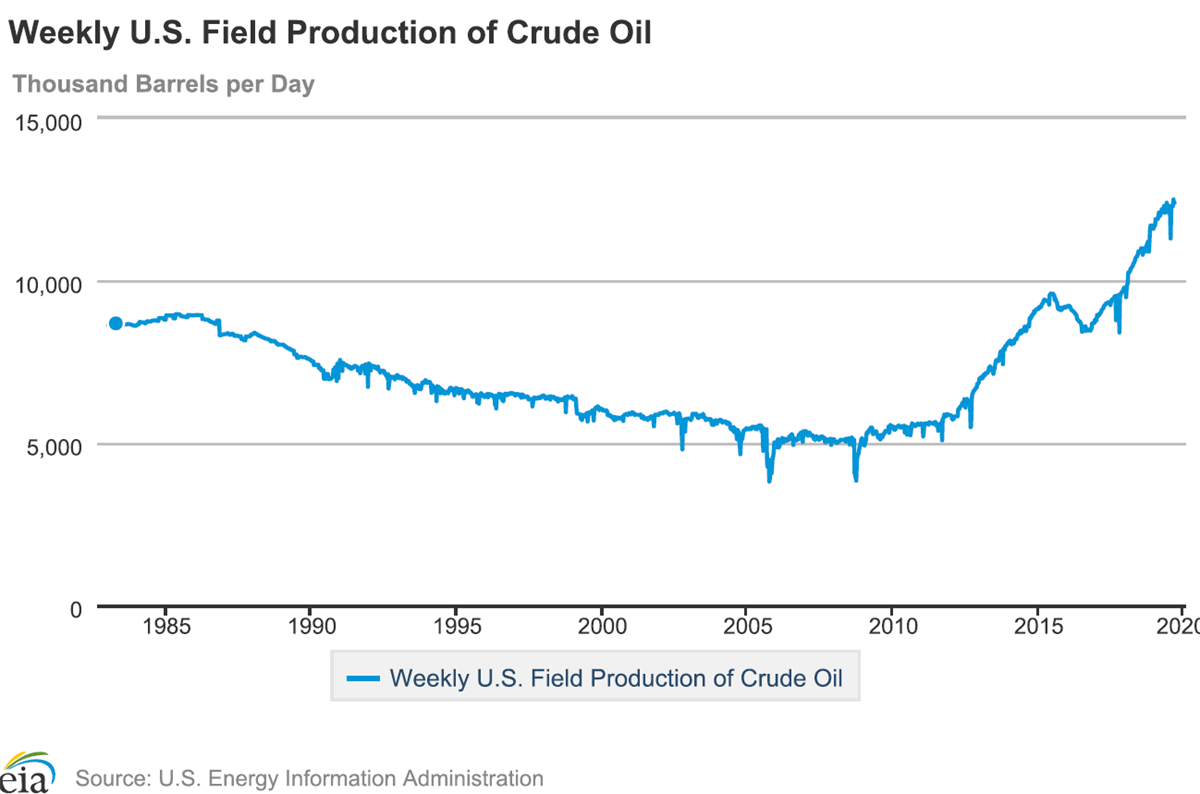 …and in many cases, we have more known reserves than we did back in the peak oil days of the 70s and 80s. 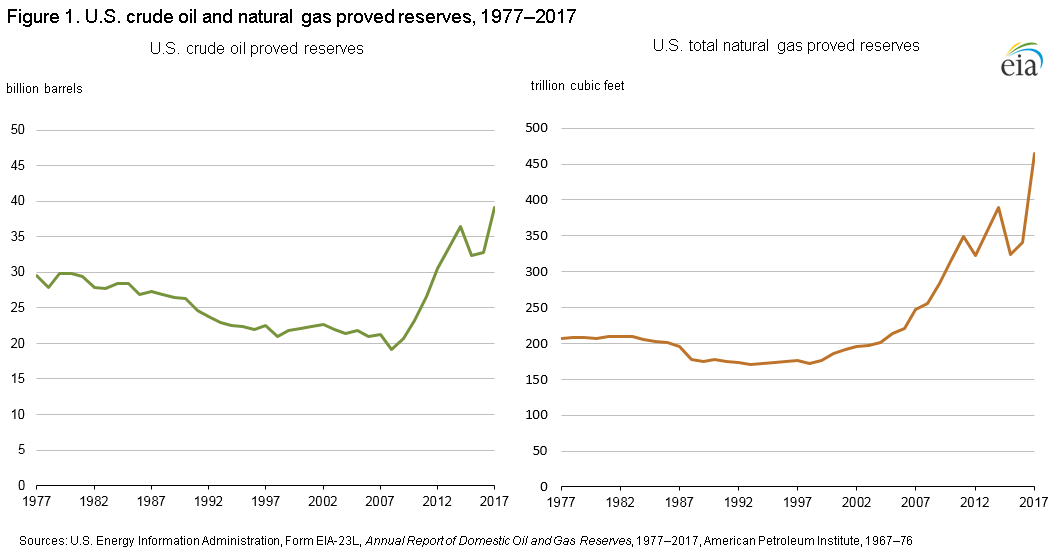 We all would like to have more “clean” renewable sources of power. That said, it looks as if that transition is still many years, if not decades, away from replacing oil and gas as the world’s primary power source. This necessitates that we keep a close eye on oil markets and that stability be present in these markets. It wasn’t that long ago that we were fighting wars largely to protect our foreign supply of oil. Now, with US production at all-time highs, the geopolitical tables have turned. The U.S. oil production is clearly a buffer to global supply shocks from an area of the world that has a history of such shocks due to geopolitical tensions.

We don’t think this will prove to be a lasting global shock, but as we have said before, anything in that part of the world tends to be less stable and a possess greater potential to flare up if not taken care of early. We continue to be vigilant, and should it become necessary to make changes prior to our traditional month end, we of course will. We still remain cautiously optimistic and pleased with how the portfolio is currently positioned.