Capital gains taxes have been at the fore in the news lately, both at the federal and state level. This has generated plenty of questions, and when plenty of questions arise, we know that it’s time to put together a thorough, thoughtful, and concise piece that addresses key concepts around what you’re hearing (and not hearing) in the news. For this one, we’re actually going to break the discussion into three posts. This first one will focus on the concept of capital gains taxes in general and what’s being bandied about at the federal level. The second one will look at the mechanics of calculating capital gains taxes, so that you can better understand these new proposals. We will then conclude by looking specifically at the new capital gains tax bill that the Legislature passed here in Washington on Sunday.

Before we dig into the mechanics of capital gains and potential impact of the proposed federal rate increase, let’s first understand what these taxes are and why capital gains historically have received preferential treatment. Simply put, a capital gains tax is a tax on gains realized through your investment in a capital asset. This most often is stocks and bonds, but also includes things like real estate, commodities, business interests, art, collectibles, and more. Capital gains taxes are only assessed upon the sale of the asset and only if you have realized a profit on that sale (losses can be used to offset gains and thus reduce tax exposure). Sales of assets held >1 year are considered long-term, while those held for <1 year are considered short-term. In most cases, the tax treatment for long-term gains is different than that of short-term gains.

Long-term gains have historically received preferential tax treatment, not just in the USA but in most OECD nations[1]. Here is a chart showing this relationship historically here in the USA. 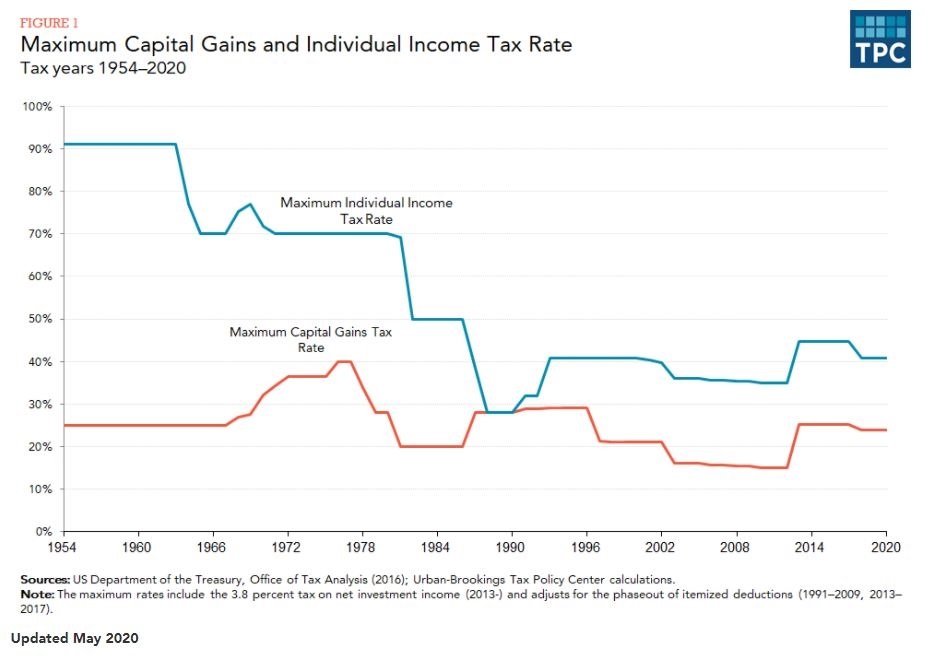 Currently, the capital gains tax rates at the federal level for most assets are 0%/15%/20%[2] (depending on income), whereas ordinary income tax rates range from 10%-37% (these apply to earned income and short-term gains). In other words, a dollar earned through work will be taxed higher than a dollar earned through a long-term investment. See the chart below to see how these capital gains rates apply at different ordinary income tax brackets. Note how there are effectively four brackets when you apply the 3.8% NII surtax. 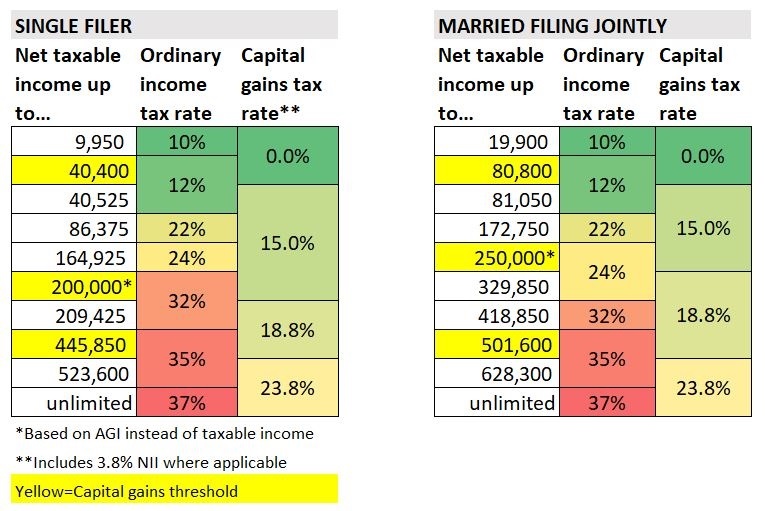 Why this preferential treatment? Four reasons are usually cited, with item #1 below being the primary:

It is without argument that the direct financial benefits of this preferential treatment flow primarily to the highest earners and wealthiest families in the USA, though any individual owning a capital asset benefits as well (which is anyone reading this piece, presumably). We’re not going to go further on this topic as we want to steer clear of politics, but instead work with the fact that this preference exists and in turn try to explain how it all works. Because we want to keep this (somewhat) concise, we’re going to address the mechanics via a couple of examples in follow-on post tomorrow.  For now, we want to conclude with some thoughts on the proposed rate hike and its impact on the markets.

As you may have heard, the Biden administration has floated the idea of increasing the top marginal rate on long-term capital gains to 39.6% (plus the existing 3.8% net investment income surtax). This would make the rate higher than the top marginal tax rate that currently applies to ordinary income (37% - though they want to raise this to 39.6% as well). In effect, long-term and short-term gains would be treated equally, at the margins. This higher rate would apply to those with incomes over $1,000,000 – though it’s not clear if this is for single filers, joint filers, or both (wording we’ve seen says “households,” which is not a tax term). Regardless, it is for upper incomes, undoubtedly. It’s also not clear if this means “Adjusted Gross Income” (AGI) or “net taxable income,” but I believe it is safe to assume the latter based on how things currently work in this realm.

It is important to note that this is a marginal rate, meaning it only applies to gains that take the taxpayer’s income over $1,000,000. Tomorrow we’ll look at the mechanics of how these graduated rates work. It can be a tough concept to understand – but we’ll do our best to make it digestible.

As this proposal was brought to light last week (though it really shouldn’t have been seen as news, as it was frequently floated on the campaign trail), the markets quickly sold off. In our opinion, this reaction was overblown. While we are generally against additional taxation on investment, we do not believe that these rates represent a significant headwind for financial markets. Will there be ramifications? Sure. Higher tax rates will alter investor behavior. If the applicable rate on short- and long-term gains is equal, investors may in effect become traders, opting not to hold assets for the long-term, thus potentially increasing volatility in the markets. On the flip side, some may hold onto assets longer, not wanting to trigger taxation, thus reducing the flow of capital to new and better ideas. The hurdle rate when evaluating a new opportunity may increase, thus also reducing an investor’s propensity to invest that next dollar in new opportunities. These are some of the negatives.

But will these higher rates stop investors from investing in capital assets, and the stock market, in particular? No. We have to remember that paying capital gains taxes means you have made money. The only way to make that money is to be invested – whether it’s in equities, bonds, small business, real estate, gold, art, or anything else. The only way to ensure you make no money is to hide that money under the proverbial mattress. Yes, you’ll never have to pay a capital gains tax bill, but you will have made nothing as a result. We believe that those who have excess cash are not likely to start hiding it under the mattress simply because the capital gains tax rate increased. As it relates to the stock market, the propensity to invest here relative to other capital assets will remain unchanged, so long as these cap gains tax rates continue to apply equally across the spectrum[3].

In other words, we’re not sweating this change from a long-term market perspective – but we’re certainly not ignoring it from a planning one. For some, this change will be quite meaningful – such as those looking to sell their business in the coming years. In very rough terms, a sale of a $5 million business with a $0 cost basis this year would generate a ~$1.15 million tax bill at the federal level ($3.85MM net). Wait until next year, and this could climb to over $1.9 million ($3.07MM net) under the current proposal, as we interpret it. Yes, that’s over a 20% reduction in net proceeds. Nothing to slough at. All that said, there are ways to mitigate the impact if you are in the upper echelon of earners and staring at a potentially higher tax bill in the coming year. Below we’ve listed a few key ways, though there are more and we’ll continue to explore them in future briefings and with you individually if they apply to your situation. There is legitimate debate on whether to start acting now while this is still just a proposal. We lean towards “planning now, acting later” as more information comes to light. Rash, uninformed decisions rarely serve anyone well (this applies well beyond just finances!).

So much for concise 😊. Anyway, we’ll wrap this up for today. Look for additional insights coming your way tomorrow and Friday – and please don’t hesitate tor reach out at any time along the way.

[3] There are a few select examples of capital assets where long-term tax rates differ (are higher), but those applications are rare and thus beyond the scope of this discussion.