Digging deep into the vault, I pulled out a song that relates to what is going on right now.

Old Blue Eyes, Frank Sinatra, wrote the song Tina about his daughter (oddly enough named Tina) in 1960. So while it is a little before my time, and way before Andrew’s time, I can certainly appreciate the song.

In this case, the Tina I would like to relate the song to is TINA of a different sort, There Is No Alternative.

As we have been on many conference calls with other industry professionals trying to figure out the markets and how best to position your portfolio, a common theme has been “there is no alternative.” Let’s dive in to see what that really means and if we should be ‘falling in line.’

Below is a chart of the S&P 500 broken down by market size of companies. You can see there is a large disparity between the top 10 (or even the top 50) companies and the other 455 companies. You can clearly see the difference in valuations based on many standard methodologies, but like we’ve said before, maybe we are missing something.

Here is another slice at looking at the top stocks adding to a very narrow market advance. Below is the Nasdaq 100 (largest 100 non-financial companies traded on the Nasdaq market) charted against the S&P 500 index. We have also overlaid the Federal Reserve monetary operations. The last time we saw such a narrow, technology led market was…you guessed it…1997-1999. Some of you might remember what happened after that. Am I saying that’s what is going to happen here? Let’s just say it is highly unlikely to continue at this pace. If something can’t continue forever, it won’t.

Could it go further than we think? Absolutely. Does anyone remember the famous speech of Alan Greenspan at the American Enterprise Institute when he talked about ‘Irrational Exuberance’? That was in 1996. The Nasdaq proceeded to climb 292% from then to the peak in March of 2000. Might it do the same now? I guess we will find out.

Getting back to TINA, in case you thought I forgot about her.

Treasury rates are at all time lows. High grade corporate bonds are also unappealing. CDs and real estate both seem relatively fully valued, and now it is all about the greater fool theory. That says that whatever you buy, there will always be someone who will buy it at a higher price. I don’t know where that level is, but at some point that “greater fool” won’t be there and the last one in is the one holding the bag.

So when I hear an investment professional’s only argument for buying stock is because there is no alternative, I have to scratch my head and ask myself what am I missing. Maybe nothing, maybe it’s just a matter of timing.

The real problem with TINA is many conservative investors (like many of you) would like to earn a reasonable return and not take excessive risk. If stocks are the only answer, how much risk would we be taking to significantly overweight portfolios in stocks? I think the answer to that question, particularly now, is A LOT. We only have to look back to March to see how stocks can go down. Of course the real problem with that volatility is many people will make emotional decisions at the bottom of the market and not get any of the rebound. Take a look at the next chart. It shows the amount of cash in money market accounts. 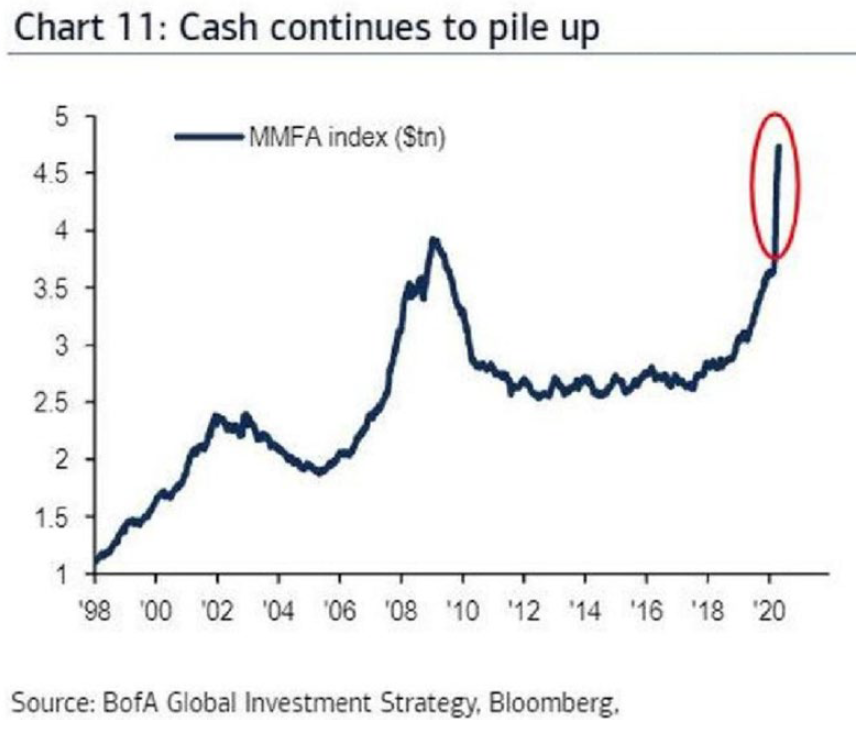 Is this fuel for the market to continue to go up, or is this money that is permanently on the sidelines? We absolutely believe that this could fuel the fire, as both TINA and FOMO (Fear of Missing Out) tag-team this market higher. We are continuing to participate in the strongest areas of the markets, while selectively taking advantage of price dislocations in certain markets that we believe are undervalued. I think VALUE is a four letter word right now. At some point in the future it will mean something again.