Things that go bump in the night

The market is sufficiently scared of things that go bump in the night. Say what?

You know, scary things like inverted yield curves and negative interest rates. Exactly the kind of stuff you read about as a kid in “Where the Wild Things Are.” Well not exactly things of literary captivation, but they certainly have captivated the markets and policy makers (in different ways of course).

So what are these “spooky” things. You know, the very logical situation where you lend money to someone and they pay you back LESS than you loaned them. Isn’t that normal? Who wouldn’t want to do that? I borrow $400,000 for a house and pay the lender back $350,000 over 30 years…Sounds like a great deal (for me). But seriously, what lender would do that?

Let me show you. 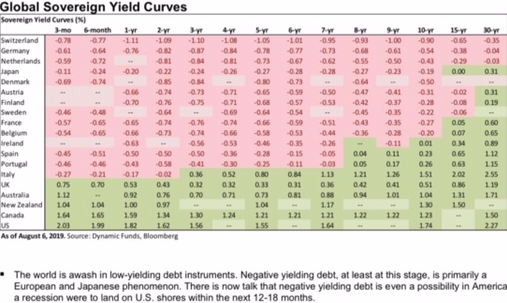 I know this chart is outdated (it’s from over a week ago 😊), because now New Zealand and Canada are talking about negative interest rates. Remember the PIIGS from five or six years ago (Portugal, Italy, Ireland, Greece and Spain)? Those were the countries that nobody would lend money to because their finances were a mess. Can I direct you to the chart above? Most of their interest rates are now negative.

You mean I give the government of Portugal money for seven years and they pay me back less than I gave them? Right! And I take the risk of their credit? Exactly! Who would do that? I know, right? No seriously, who would do that? Ok, this is going to take a little bit of explaining.

Take a look at the chart below. There is fully $15 trillion (with a T) in negative interest rate bonds in the world. Most of this money has been “printed” by central banks and then “invested” in negative interest rate bonds. So, the short answer is just about every citizen in every country is buying them (though not the US…yet). How so? As central banks print money (which if you remember is a promise to pay) they invest that money back into (usually) their home country’s bonds. For instance, the Federal Reserve has a balance sheet (meaning money that it has borrowed) of roughly $4 trillion, of which nearly all of it is invested in US Treasuries and Government-backed mortgages. 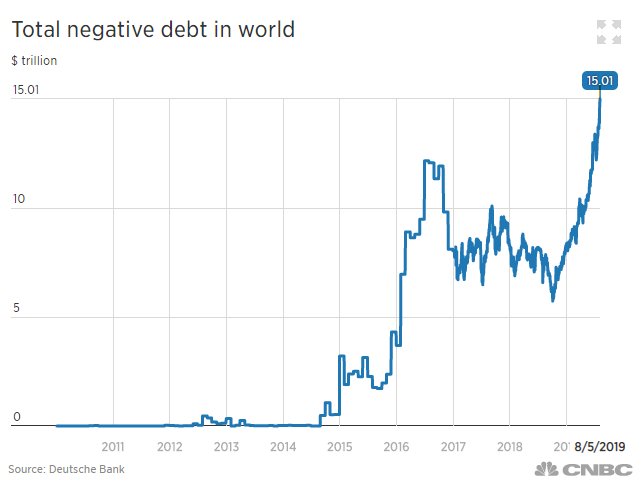 While that sounds like a lot of money, compared to the US economy, it is a fraction of our GDP on an annual basis. Japan, the ECB, and especially our good friends the Swiss are doing exactly the same thing, but they have figured out the trick – force interest rates below zero.

As two more countries consider negative interest rates, I can only say that it is a matter of time before negative interest rates come to an exchange close to you. One of the big reasons it is only a matter of time is because foreign central banks will continue to look for opportunities to buy debt that returns them SOMETHING. If the US is the only game in town, much of the flow will come to our markets and push prices down and eventually negative. The US dollar is the other reason that rates won’t stay the outlier forever. The US dollar will continue to stay strong and only get stronger relative to other currencies the longer our rates stay higher than the rest of the world. That puts us at a disadvantage in global trade because our goods are more expensive if our currency is strong. So while every president says they want a “strong dollar,” the truth is they don’t want too strong of a dollar.

One last thing, because I’m sure your head is spinning (I know mine is). Many of us are receiving pension benefits or will be in the future. I know pensions are being phased out, but they’re not quite gone yet. Many pension funds have an assumed rate of return over somewhere around 7% per year. Sounds reasonable, right? Well, only if you assume equity markets will return 9% like they have over the last 75 years and bonds return 4 or 5% like they have over the last 40 years. Here’s the rub…

How do you get 4 or 5% from bonds when they are yielding negative returns? I’m going to leave that for you to ponder (don’t think on it too long). Let’s just say that pensions (state, local, private company) use these ridiculous assumptions so that they don’t have to report how underfunded they are. And how underfunded if they use more sober numbers like 1% for bonds (which is starting to be generous) and 5% for stock (which is the highest 10-year forecast we can find)?

Well, thankfully we can print more money and “bail” out these pensions when their assumptions don’t materialize.

We continue to be cautiously optimistic for the public markets, but the evidence is starting to accumulate on the side of the end game starting to play out. Don’t worry about that, the same people who have been leading this show for the last 80 years have a plan. What’s the old saying, ‘The beatings will continue until morale improves.’ Sorry savers, I suggest you learn a saying, ‘Thank you sir, may I have another?’…or instead simply realize that the best recipe is going to be “Save more.”