It’s a busy week in the markets, as we kick off the real start of earnings season on Friday with the first of the bank earnings. We should get big tech earnings around the end of January or first part of February, so we will see how that goes. Earnings estimates have been coming down over the course of 2022, and I would expect that to continue in the first half of 2023. Let’s take a look at FactSet’s earning compilation. 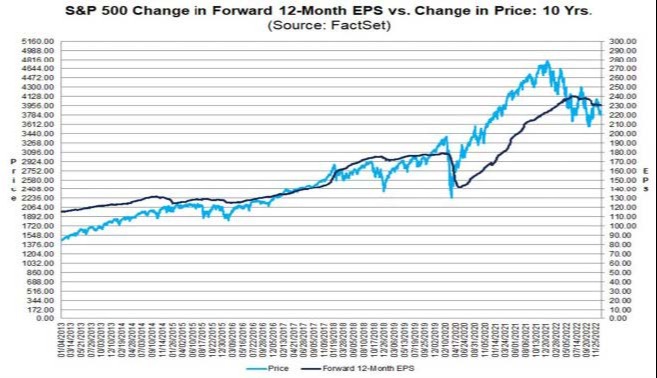 You can see that earnings peaked around May or June last year and have been going down since then. Forward 12-month earnings expectations are down to $230 per share on the S&P 500. I don’t have to tell you my opinion of that index, but it does represent a majority of the market cap in the U.S.  What may warrant reminding is that earnings ultimately drive stock prices over the long term, in our opinion. Markets can certainly get disconnected from them in the shorter term, but ultimately stock prices should reflect earnings, as you are buying rights to a future stream of earnings when you buy shares in a company.

You can also see the guidance that these companies are giving to analysts. 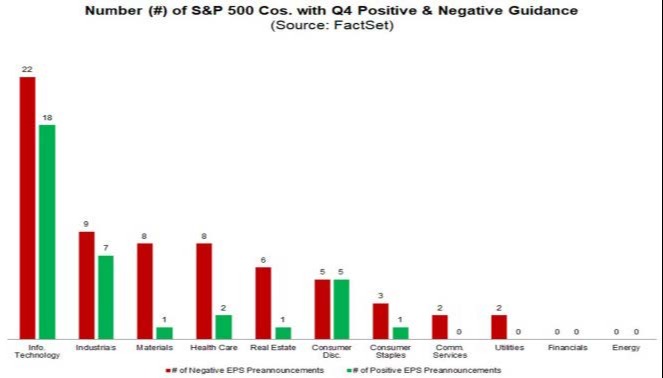 It should come as no surprise to our readers that earnings are coming down. In fact, we should expect that given the recession we will likely experience later this year. The big question we always ask ourselves is, “Is this information already reflected in the markets?”  Because don’t forget, the market discounts the future. It’s no surprise about the recession, the only question left is how bad.

I think that’s what the market is wrestling with right now. From my perspective, there are three possible outcomes:

My guess is the second scenario is the most likely. This would be no fun, but also isn’t the end of the world. We have a lot of cash, bonds and high-quality equities that will likely get through that scenario decently well. Of course, I don’t have a crystal ball, nor does anyone else, so we have to make some sort of educated guess of what we think the most likely outcome would be. Here is the opinion of Morgan Stanley’s Mike Wilson:

How low does he think it will go?

Hey, look at that…3000 is his downside target. What else does he say?

So a mild recession in the first half and then a recovery. BUT, he is talking about Equity Risk Premium (ERP). What the heck is that?

The short definition of that is the amount of return investors expect over the “risk-free” rate of return. Well, that’s clear as mud! Basically, investors will want more expected return from their “risk” assets (stocks) than their bonds, but that the amount will actually increase as the recession starts (meaning stocks will go down). Let’s look at where ERP stands now. 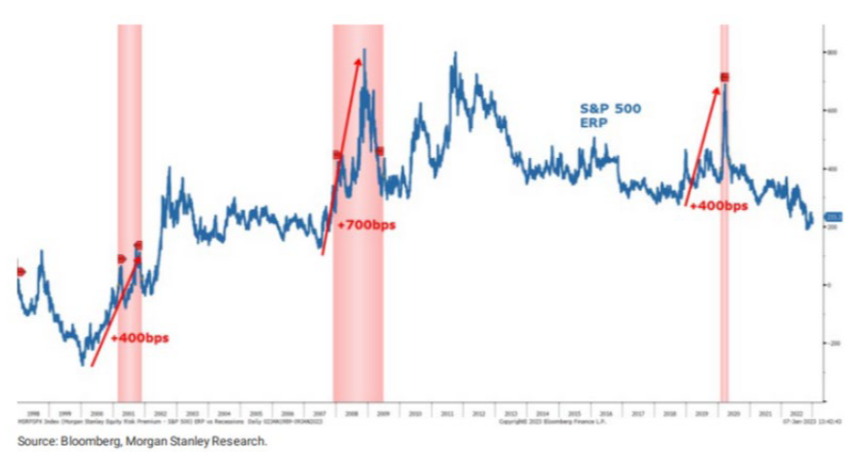 S&P mulitples right now are 17x, so if you put that number on $190, you get 3230. Oddly enough that is the high end of his range (and ours too). If you take $180 times 17 you get 3060 on the S&P. Add an increase in the ERP and you’re about where you would expect. Does it have to go down that far? No, but there are many things out of people’s control. So, err on the side of caution and look for the clouds to start lifting. Doesn’t mean the rain has stopped, but you are looking for bad to become slightly less bad (if that’s even a thing 😊)

As we finish, let’s shift gears and quickly look at comments from my good friend Jerome Powell today.

How about not letting prices get out of control in the first place Jerry!? Sorry, that wasn’t nice, but he doesn’t pay the price for the lack of proper policy a year plus ago. We (the collective we) do. I know you’re used to this drum beating, but it needs to be said. Finally, I do get a kick out of this statement.

I only wish that were true. While there isn’t “direct political control” there is political pressure, no matter how much they try to say otherwise.

The first week of 2023 was off to a positive start, which bodes well for the year as a whole.  You know the old rule, as the first week of January goes, so goes the year.  While that’s not exactly true, let’s hope that 2023 is better than 2022.  If you have questions or comments, please feel free to reach out.