The reopening continues, but questions remain

Some have noted our recent updates have been wanting for a crystal ball. No predictions of what the markets will do next week, next month, or next year. That’s kind of been the point. We have instead been presenting interesting observations and communicating that the signals are mixed and the investing environment remains challenging. This week is not going to break that trend. Without further ado, let’s look at some of those signals.

Retail sales numbers came out today. As you would expect, they were very good. Why would you expect that? Pent up demand. With March and April being marked by the shutdown, May represented the first month that many stores were able to open their doors for business (big box retailers being a notable exception). The question that remains for us is how many of those companies that were previously closed can open again once permission is granted? The categories below in the positive reflect really just a few companies that have been the main beneficiary of the shutdown, since they were never shut down in the first place. Please allow to point out that those small businesses represent a lot of jobs. If owners don’t have enough capital or find they can’t open again profitably, we think there will be additional problems reverberating across the economy. That is unless of course we just close all the small businesses, and everyone just spends money at Costco, Home Depot, and Walmart (charming 😊). 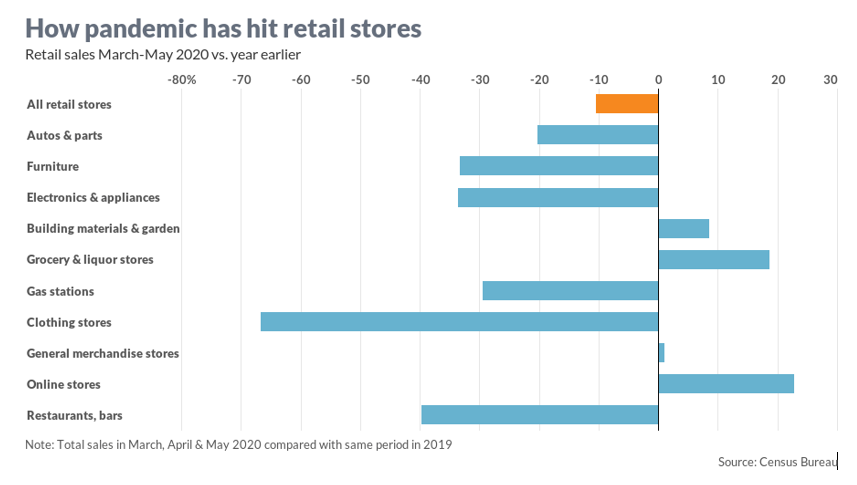 If, however, many businesses are able to reopen and find ways to again turn a profit, we think this market could have a lot of upside given the amount of stimulus from the central banks and the governments around the world.

Shifting our attention now to a story that just has to be told. From the pages of ‘the world has truly turned mad’, we saw late last week that the bankruptcy court approved Hertz to sell up to $1 billion in new common stock. Just so everyone is on the same page, this is a company that has already filed for bankruptcy. A judge overseeing the filing had to approve it!  Let’s quickly remind those that are unfamiliar with how bankruptcies work and the order that creditors get paid.

The typical order is:

So, the judge ok’d Hertz selling $1 billion in ‘common stock.’  You will notice they would be the last to get paid back upon dissolution of the company. Meaning anyone who buys that stock (or currently traded stock for that matter) will likely end up with NOTHING. Note as well that even if the brand Hertz continues (which it very well could), it would likely be via a new company formed out of the bankruptcy process. New company = new shares. Stock in old company = worthless. 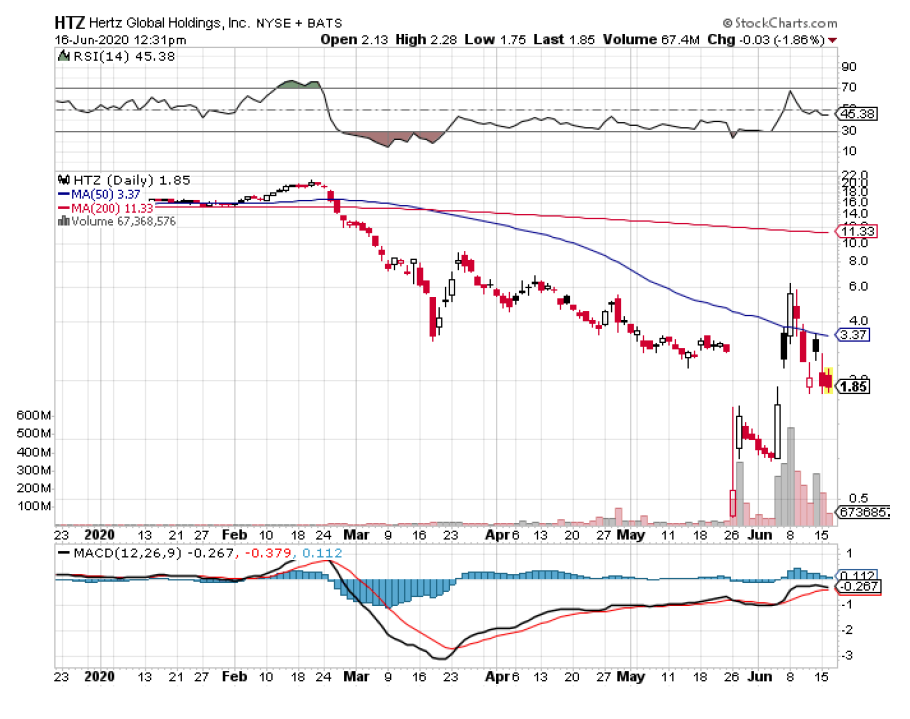 Included in the prospectus is the typical terms that say this investment could be worthless. I might say ‘likely,’ not ‘could’ in the prospectus. Again, what is so amazing is the judge allowed them to do that, knowing that it will likely go to zero. What will be more amazing is when (not if) investors (let’s use that term loosely) use their money to buy said shares. In effect, it would be transferring $1 billion from stockholders to bond (debt) holders. I really want to buy stock in a class-action law firm, because someone is going to sue over this. I put the chart of Hertz above and if you notice, much of the volume spike was $3+ range, meaning many were just speculating on the price and got caught with their hands in the cookie jar. This will be interesting to see it develop, with the slimmest of hopes that the equity will have any value in the new company.

Finally, yesterday’s markets turned around mid-day because the Federal Reserve said it was going to be buying individual corporate bonds. Prior to this they had been buying ETFs. They appear to be inching closer to buying stocks, and they have already said there is nothing that’s off-the-table. Have we seen this movie before? Not in the United States, but below is a chart of the Nikkei 225 in Japan. The Japanese central bank has been the main buyer of both bonds and stocks in that country for a long time. If we want to see our future, Japan is 10+ years ahead of us, and these are the results (blue line below). Japan started buying stock ETFs in October 2010, which clearly helped equity prices coming out of the Financial Crisis. For comparison, we layered on the S&P 500 returns over the same time period (green line). 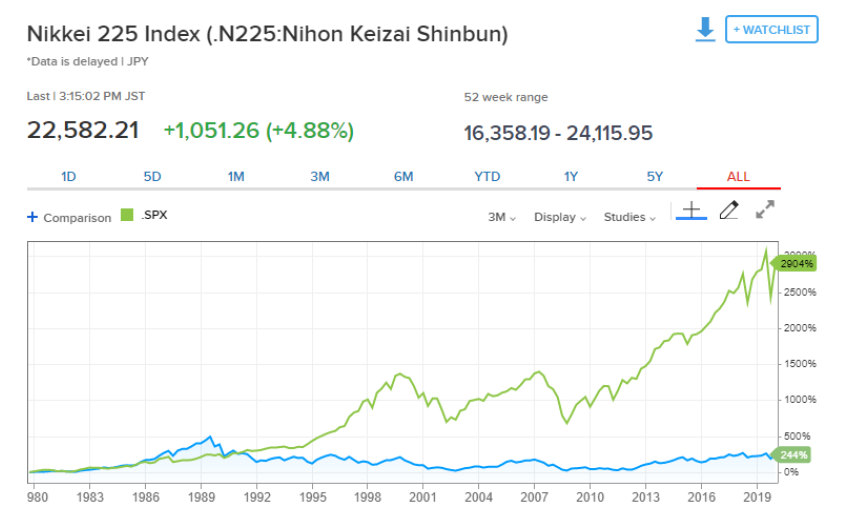 Like we have said in the past, it is one thing to buy your own country’s stocks. Switzerland has taken that to a new level, by buying US stocks in order to keep their currency low. We have talked about kicking the can down the road. Many have said over the years that the road is coming to an end, but at least for now maybe there are more games to be played.