The Market gets what the Market wants

Over the course of more than two decades, I have seen the market get what it wants. From changes to board representation, to spinning off pieces of companies, to ousting company CEOs – the market eventually gets what it wants (how long this takes is a different question).

It has also made the FED reverse past rate increases, like in 2013, 2018 and likely the coming rate DECREASE in interest rates during the next year or so. Yes, you heard me correctly. The market will force the FED to reverse course on interest rate policy. Let’s take a look at where the FED members believe interest rates will be over the coming years. 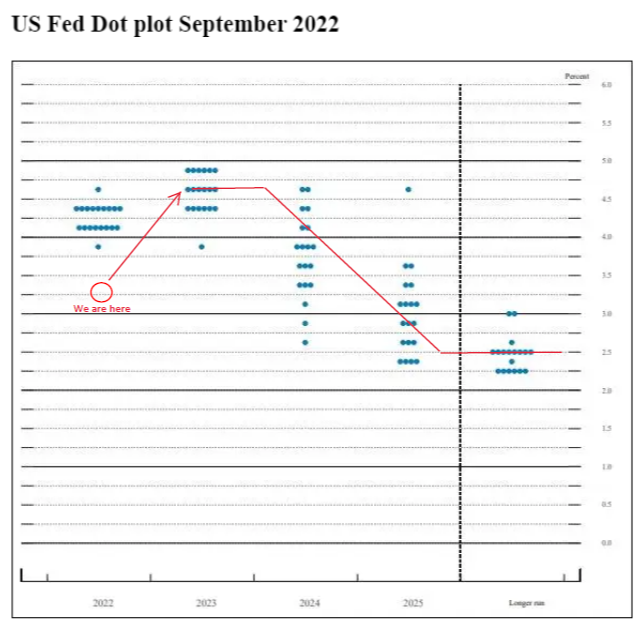 Let me interject my strongly held opinion here. If the FED does raise to nearly 5% short-term rates, they will NOT be able to keep them there for a year or more. The market will force the FED to change course (lower rates in the future), just as it forced the FED to raise rates when the FED said rates were “transitory.” How does the market force the FED’s hand? It’s important to remember that all other rates are market-driven. The FED can’t control the 30-yr Treasury rate anymore than it can control where you go to dinner on Friday night. The market sets that rate, and the work the market does there in turn strongly influences where the FED is able to hold the Fed Funds Rate if they want a normally functioning economy.

Mortgage rates are at levels not seen in nearly two decades. See the chart below. 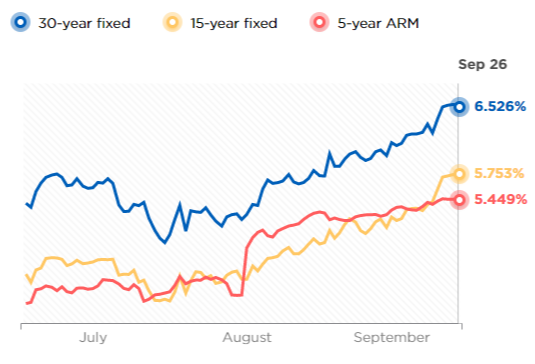 The bond markets are screaming that the FED is making a policy mistake.

Meanwhile the 5 year-5 year forward rate is still in the low 2% range.

And of course, the dollar broke out to a new high after the FED meeting last Wednesday. Will it go to the highs seen in early 2000? Your guess is as good as mine, but if the FED keeps raising rates, it’s likely a good bet (pack your bags for a cheap trip to Europe if that’s the case!).

Finally, to end this week’s blog, let me leave you with some headlines that I think hit the mark. First is Professor Jeremy Siegel.

Then there’s the good folks at Morgan Stanley.

And finally, we see that rents are actually coming down, easing inflation pressures. Courtesy of ABC News.

We can see that many parts of the inflation equation are coming down, but the FED chooses to be focused on the here and now and disregarding the trend of inflation. That will either prove to be wise or another policy mistake. We will see. Eventually, the market will make new highs. We don’t know when that will be, but we will say that how the FED proceeds here will play a big role in determining that timeline.

In the next few weeks, we’ll aim to look at some year-end planning tips in light of this year’s market downturns. There are opportunities to improve your long-term plan in environments like this, and we look forward to helping you consider those opportunities in the weeks ahead. Thanks for reading. Have a good week. Let us know if you have any questions about the market or larger planning issues.