The History of Market Pullbacks Demystified

In the investment world there are many sayings like “Bulls make money, bears make money – and pigs get slaughtered,” “Buy the Rumor, Sell the News,” and of course “Buy low and sell high.” The reality is that investing is difficult, and manifesting these convenient quips is much easier said than done. The simultaneous reality is that getting the big things right is what really matters, in our opinion, and today we’ll look at the “big thing” of distinguishing between a “pullback” and a “bear market.”

Not to belabor our current market environment, but it is in times like this that many investors look at the pullback and automatically think that this is the end of the “bull” market and the start of something a lot worse. I came across this diagram earlier today and wanted to share some it with you. 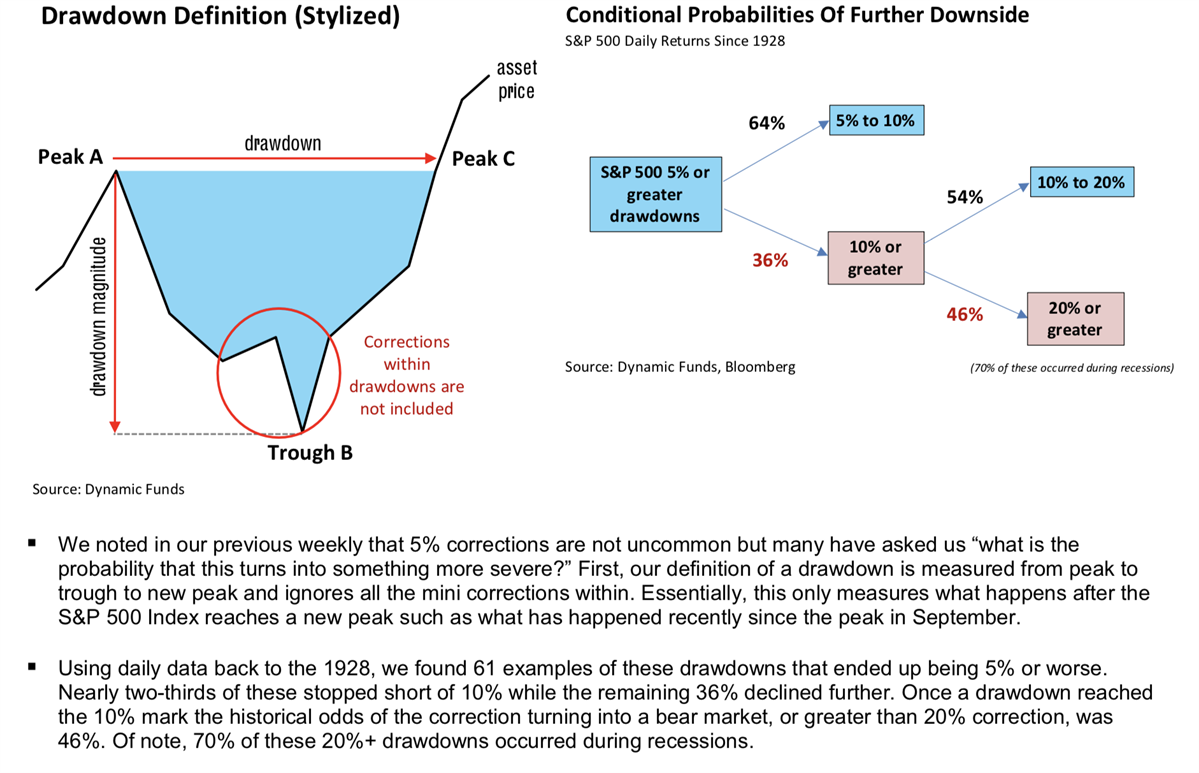 Keep in mind, every bear market inherently starts with at least a 5% drawdown (a bear market is generally defined as a move of ≥20% downward from the market peak). Also keep in mind that, as we’ve said before, you expect three or four of these ~5% “garden-variety” pullbacks every year, on average (i.e., very common). On the right side of this graphic is a chart that looks at drawdowns greater than 5% and what the frequency of those is. One caveat of this slide is it only counts pullbacks from new highs, so a 10% pullback that happens without a new high is not counted.

What’s interesting to us here is that of the market pullbacks that are >5%, almost 2/3 of those stop between 5-10% in total. Of the remaining 1/3, a little under half of those times we see something greater than 20% - which we now know is considered a “bear” market. Let’s do some quick math / statistics from the numbers we saw in the first graphic:

In other words, statistically speaking, 16% of the time, when the market sells off 5% or more you will get a “bear” market 20+% drawdown in your investments.

If every 5-7 years we have a retraction in the business/market cycle (recession) and roughly 1 in 6 years we have a “bear” market, it makes sense that those two times would likely coincide with each other (because of a lot of math we won’t get into here).

As uncomfortable as market fluctuations are, 84% are “normal” and should be expected during rising “bull” markets. It’s the other 16% of the time that we really have to worry about (i.e. a “big thing”). Getting it right in those 16% of cases is critical if you are going to avoid the kinds of losses that can meaningfully alter your financial plan.

The good news, like we have said so many times before, is that our model was built with the goal of reducing risk and protecting portfolios during those markets. Like Yogi Berra said, forecasting is hard, especially about the future – so how does the model do what it is designed to do? How do we try to get the big things right? To us, it seems advantageous to look for indicators that will tell you there is a turn in the business/market cycle. We only really know after the fact that we were in a recession, but there are many signs that tell something is changing in the future – like stock market actions, leading economic indicators, and inverted yield curves. Of course, cycles only turn from the top or the bottom. What can be especially challenging is that at the top of the cycle there is low unemployment, rising wages, and good growth numbers. In times like this it seems like the good times can roll on forever. At some point though, the good times roll over and you get the next cycle.

We are closely watching the indicators to see if that cycle is about turn, and we will act accordingly when the indicators point us in that direction. We may be right, or we may be wrong. Either way, we never mind erring on the side of being overly protective of your capital.