For those of you that have never heard me say it, where have you been? For those that have heard me say it, welcome to Groundhog’s Day. Many times over the course of the last 20 years, I have said that if the only tool you have in your tool bag is a hammer, everything looks like a nail. I usually say that about the Federal Reserve. The only tool they have is a hammer. That hammer is the hammer of interest rates and money printing, both of which are blunt instruments.

Then again, is it possible that to fix any problem you just need a bigger hammer? Lower interest rates? Print more money? I was doing a little hammering this weekend myself and so I thought I would try out this theory. I needed to remove some sheetrock. Small hammer worked fine, big hammer worked better! Needed to pull up some subfloor. Small hammer sort of worked, big hammer worked much better. Needed to remove an exterior door. Small hammer, not much happening there. Big hammer, let’s just say I can’t really do much else with the door now, not to mention some siding replacement that needs to occur. As I got ready to move some plumbing, I went right to the big hammer, because why not?!?! It’s worked before and I have been conditioned that the answer is indeed a larger hammer.

So the next thing I did was call the plumber…

But wait, surely more money is always better and lower interest rates are always better. And the more extreme you get the better the outcomes, right? Well, we’ve discussed MMT (Modern Monetary Theory) in the past. There are some (educated people) that say it doesn’t matter, money and debt are just numbers and are irrelevant. Who am I to say? I mean they are the one’s with the PhD, and I am the one that smashed my plumbing.

Speaking of plumbing, below is a chart of new construction housing data. You can see that there was indeed a ‘V’ shaped recovery in the construction industry. Spurred of course by the millenials looking to relocate to the suburbs (which they previously shunned). Nonetheless, having a bigger house is now more important than being close to work, since work is now in your house.

I’ve mentioned the following a couple times in the past, but thought since I have my big hammer out, I may as well take another swing at it. Below is a chart of the S&P 500, which we all know actually has 505 stocks in the index (okay, fair enough if that’s new news for you…we’ll forgive you this time for concerning yourself with actually useful knowledge!). We can see that the top five largest companies represent 25% of the total value of the index. Of course, this graphic was so seven days ago. That number is now 29%. Do you think when the top 5 companies become 100% of the S&P 500 they will still call it the S&P 500? I mean, you just throw 500 other bankrupt companies in there with no value (keeps the marketing clean). Okay, I kid. Let’s get to what’s interesting here. 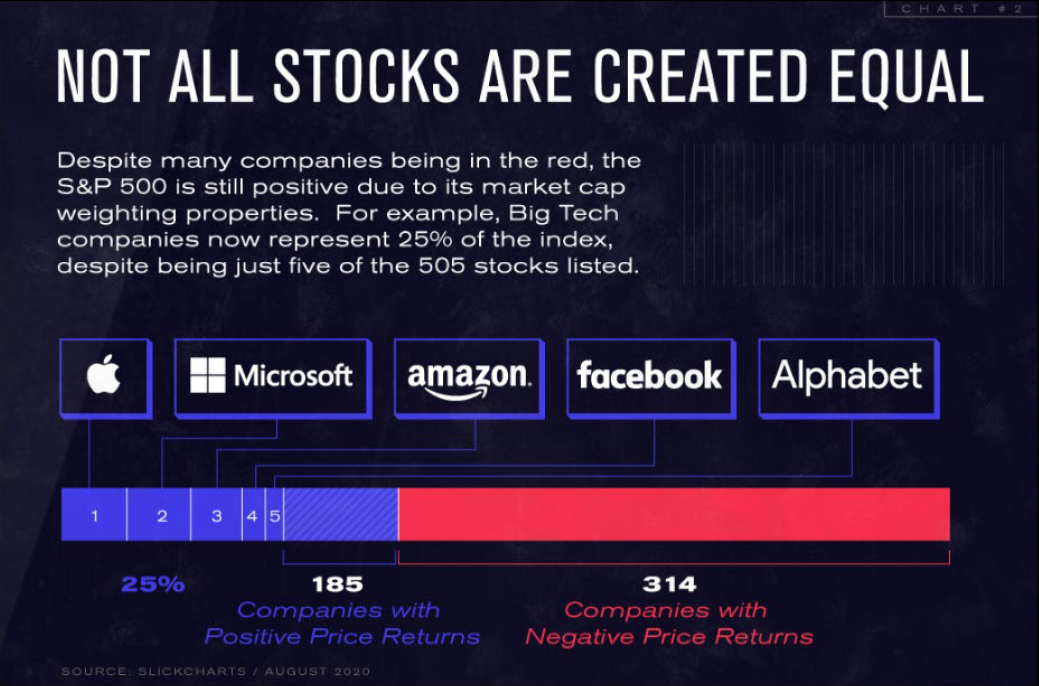 So what’s interesting about this chart is that over 60% of the companies have negative price returns for the year. That would explain why our model has been slow to add back risk. With over six out of 10 stocks not showing relative strength, it takes a tremendous amount of pushing from the other 4 out of 10 to force the model to take risk (THAT WOULD BE THE BIG HAMMER).

Let’s dissect these top five companies, because there must be fundamental reasons why they have an outsized weighting in the index.  In case you think you’ve seen this movie before, maybe you have, but in 2000 they didn’t have profits. At least today they do. Below you can see the disconnect between the sales of these companies and their returns. 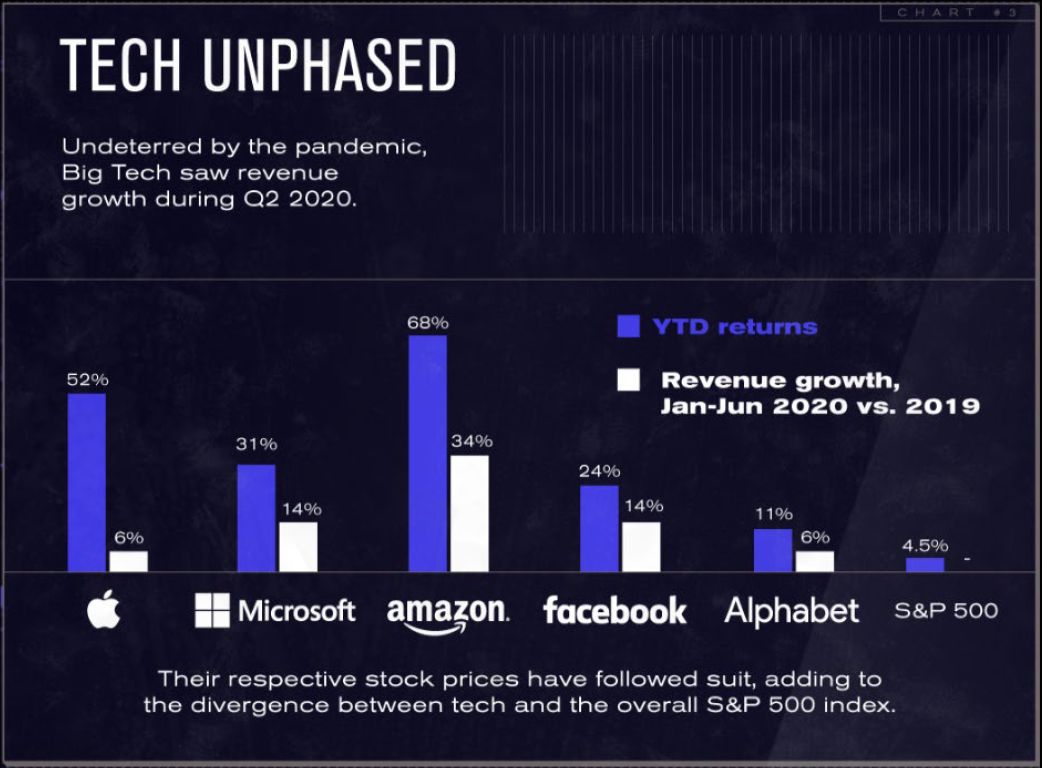 As always, none of this means a crash is coming, and maybe tech will drag the economy back to health and we will see new highs over the next months and years.

One last chart below. While those five have been doing much of the heavy lifting, we can see in the chart below that the breadth has been getting worse since its highs in June. We call that a divergence.  In a healthy market, most stocks would be participating in the upward movement. In this case, you can see this last upleg has seen less and less participation. 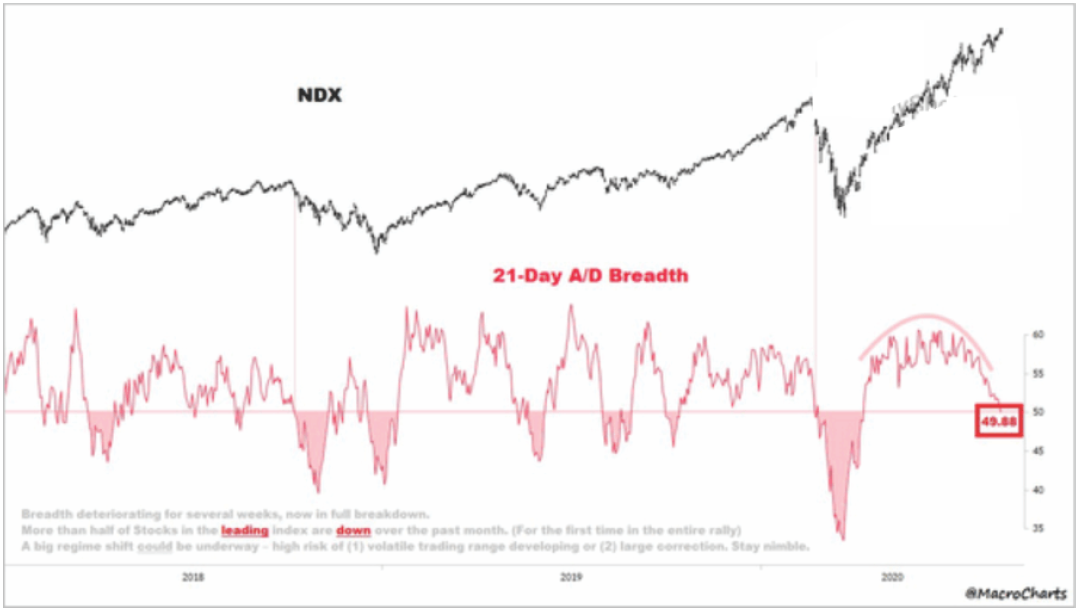 A couple last things to note. Number one – I didn’t actually take a big hammer to my plumbing (shame on you if you were like Andrew and Jeff and just assumed it was true 😊) and number two – if anything goes wrong with the market plumbing, the FED will be right over with… you guessed it, an EVEN BIGGER HAMMER!

As always, we welcome your comments and questions. In the meantime, we’ll continue to test our assumptions, dig into our research, and lean into our model as we seek to be ever mindful of risk while pursuing long-term returns for your portfolio. Our model has partially flipped to more stocks and is on the verge of going “full risk on” as US stocks are close to being in the top spot in the model.