So many jokes, I don’t know where to start

On a completely non-investment related topic, it appears that ratings for this past weekend’s Oscars’ will be up from last year! Let’s ignore that last year’s show celebrated a year when no movies were released… 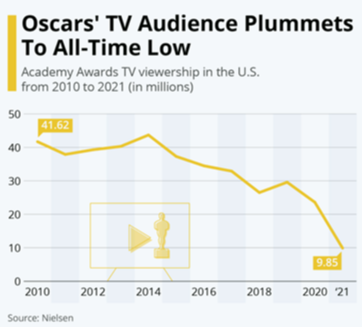 This year’s Oscars’ will likely not be above 2020 levels, continuing the dismal results of the last 10 years plus. Which of course begs the question…If an Oscar hits the ground and nobody’s around to hear it, does it make a noise? That said, you might also ask, “If Chris Rock falls to the floor after getting slapped, does he make a noise?” Apparently so, as an otherwise ignored awards show is suddenly in our collective conversation, at least for a couple days. Apparently, Rock forgot that Smith once played Ali…or that he was part of this epic scene in Hitch (https://www.youtube.com/watch?v=50YQeugOMOw) (watch to the end). Note, this is certainly not to condone the joke that was lobbed or the fist that was wielded.

You might be asking why we’re talking about this? The answer is simply because we found it interesting and wanted you to know we observe more than FED policy notes and interest rate moves (we know you were starting to think otherwise over the past few weeks). No cheap corollary to the investment markets or financial planning principles will be drawn here. So now back to our regularly scheduled program…which, of course, is the FED, interest rates, and inflation (we promise a financial planning topic next week).

As a regular reader, you know our thoughts on the Federal Reserve, but we are not the only ones with opinions. I was on a research call last week with one of our most respected bond managers, Guggenheim Investment Partners, and they were discussing their thoughts on what is happening.  Specifically, they were discussing the current state of the economy and where we are in the inflation cycle. There were a couple points that I thought were most important – comments on the yield curve and the potential for a recession. Let’s look at both.

Their preferred yield curve spread is the 3mo/10yr spread. I have included the most recent chart of the full yield curve below. You can see that much of it is flat or inverted. 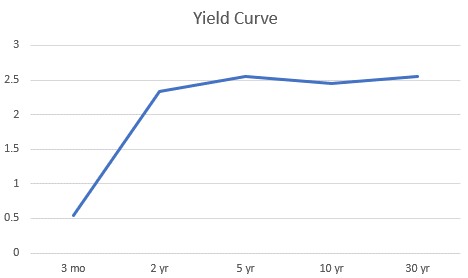 There is a big debate about which curve is more important. We tend to look at the curve in totality when making a judgement. In 2020, we mentioned that the 2/10 was inverted and that was a cause for concern, but that the 3mo/10yr hadn’t inverted yet. Today, the 2/10 is 12 basis points (0.12%) from flipping and is something to keep an eye on. It isn’t telling us anything at this point, other than waving a yellow flag.

The 3mo/10yr is very steep but remember that the 3-month Treasury is heavily influenced by the FED funds rate. With many rate hikes factored in, you could see this invert by later in the year if the FED continues on its path (we will see just like you…but grab your popcorn, as it should be interesting).

If you think about it, the economy is hot right now. Some might say too hot, aided by an explosion in the money supply that is driving inflation. We’ve said that the economy may be starting to slow, but that many of those numbers won’t be showing up in the data until May or June. One of the early signs of things slowing is the used car index (though we can’t extrapolate too much from that single data point). Used car prices were a big component of the torrid inflation we’ve seen over the last 12 months. With that slowing, that should help slowly ease the inflation rate (see chart below), though contracting the money supply (M2) is what will ultimately bring relief in the inflation data.

Of course, that’s not the only piece. We do have oil and gasoline at highs (that will keep things elevated). The last question is labor costs. We know that costs are going up. What we don’t know is how productive those costs are. If productivity offsets a large majority of the increase, we can still have inflation come down to moderately elevated levels (3%-4% range over the next year or so).

If we end up with a recession in the next 24 months like Guggenheim expects, you can see inflation come back down to long-term trends and maybe below for a period of time. From there, will the FED drive the car into one more ditch? We’ll see. As we sit here now, they (Guggenheim) expect to see new highs in the markets before things head back down prior to the 2024 recession. A lot can play out between now and then, and we’ll continue to monitor what they say amongst the myriad of other data we consider daily.