If you haven’t seen the movie watch ‘The Big Short.’ One of the main characters is a quirky investor (Michael Burry, played by Christian Bale) that believed the mortgage market was going to take a big fall (this was back in 2005-2008). One of the best parts of the movie was when the head of a bank that gave him substantial money several years before came into Burry’s office to ask for his money back. You see, he had invested this money with the premise that the mortgage market was going to implode, but after many years of losses, he was starting to disbelieve the premise. See the link here (beware of language). Ever had that feeling?

I wondered that last weekend when houses for sale in Lake Chelan were on the market at 50% premiums to just a couple years ago. Seems like a good time to “short” housing in some of these communities again (but like that bank owner, likely it will turn out early this time as well).

Anyhow, getting on to the real topic, although somewhat related. Cathie Wood, the owner and portfolio manager of the ARK Innovation funds (which we have been big fans of long before she was a household name) and many hedge funds are going to war. Not literal war, but financial war. A war where one side is right and the other side is destroyed, along with their capital.

Now, you could argue that time could make both sides winners or losers, but in the here and now, someone will be right and someone wrong.

ARK funds are based on five innovation platforms which are shown below in the graphic. You can see that, although there are five main platforms, there are several additional themes that spawn from the main platforms, as well as several overlapping platforms. If I look at those five platforms, I find it hard to argue with the fact that over the next 10+ years, these will revolutionize many aspects of our lives.  Some in ways we can’t even think of now. For more on this, check out ARK’s annual publication of “Big Ideas.” 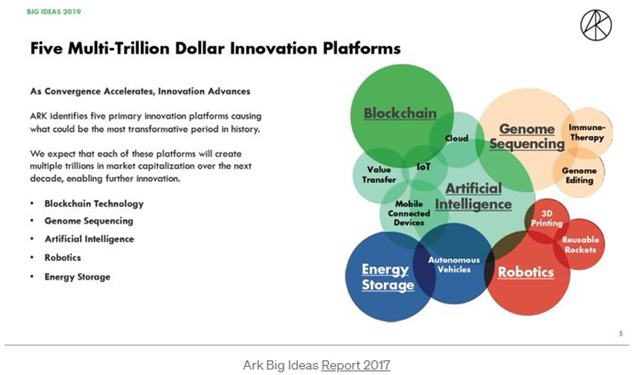 Think about internet shopping back in the early 2000s and compare it to the things we do today online. Uber didn’t even exist back then, neither did Facebook. For that matter, Google was still a nascent technology. Apple made home computers and now they revolutionized mobile computing. It’s hard to imagine the future that we will live in, but I would guess that these five innovation platforms will be front and center for much of it.

Then there’s the other side of the “trade.” Those that think too much money has gone into this trade and that it’s now too expensive. Cathie herself would say that if you look at the earnings (or lack of) at present, the stocks look expensive, but if you look at the growth over five years (her time horizon), she will argue that they are “value stocks.”

Now, that “value” moniker might be a stretch for me to agree with but let’s take an example. One of her top holdings is Square. Here is what revenue looked like five years ago compared to today. Then we’ll look at the price five years ago to see if it looked like a “value” stock.

If we look at the trailing 1-year earnings, that total is $1.73 per share. The stock was trading around $11 a share at the time. If we do the math, we find that the P/E ratio is $11.66/$1.73 which equals 6.7 times earnings. I think anyone in the investment business would call that a “value” multiple for sure. Take a look at the stock price in the chart below. 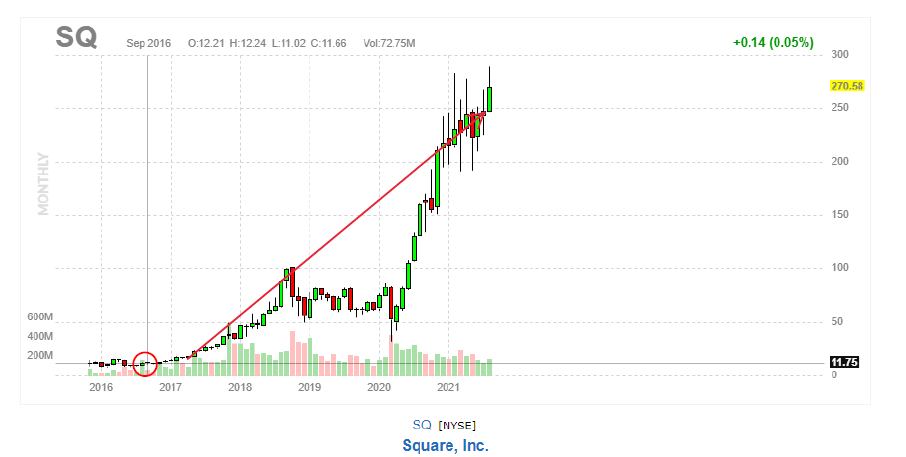 That’s just one example. I could have thrown Tesla, CRISPR Therapeutics, Bitcoin, Invitae, and many others and likely seen something similar.

So, the argument is - are they overpriced or are they “value” stocks looking out five years.  I’m going with Cathie on this one.

Could the hedge funds be right? Sure, if you look out 6-12 months and you get a general market pullback, Cathie’s fund will likely go down more than the market, but the companies will continue to grow at exceptional rates (difference between the company and the stock).

In all fairness, it does make me uncomfortable (and I’ve mentioned it in this blog in the past), that so much attention is paid to Cathie and her strategy (the New York Times got in on the action this past weekend). But, when you make 150% in a year as she did last year and you make for good headlines through your strong convictions, I guess that’s what will happen. Now this year she is underperforming the “market” and the hedge funds are going to pile on thinking that she has lost her skill. I always compare it to a .300 hitter in baseball. If they have hit .300 consistently, and one year they don’t (for any number of reasons), does that mean they can’t hit the ball anymore or is it just the way the game goes? If you’re Mariners leadership, you trade them to another team, just to see them get back to their old form and you’re stuck with a chronic underperformer. Ok, I guess the Mariners are doing alright this year and coming from having the worst farm system in baseball in 2018 to the best in 2021, I’ll cut them some slack. They should be fun to watch in the upcoming years as those minor leaguers start performing in the big leagues…but I digress.

With the ARKK ETF holding at the 50-week moving average (see chart below) and short interest high and notable short-sellers getting airtime, seems like the perfect time to crush the shorts if you’re Cathie Wood. 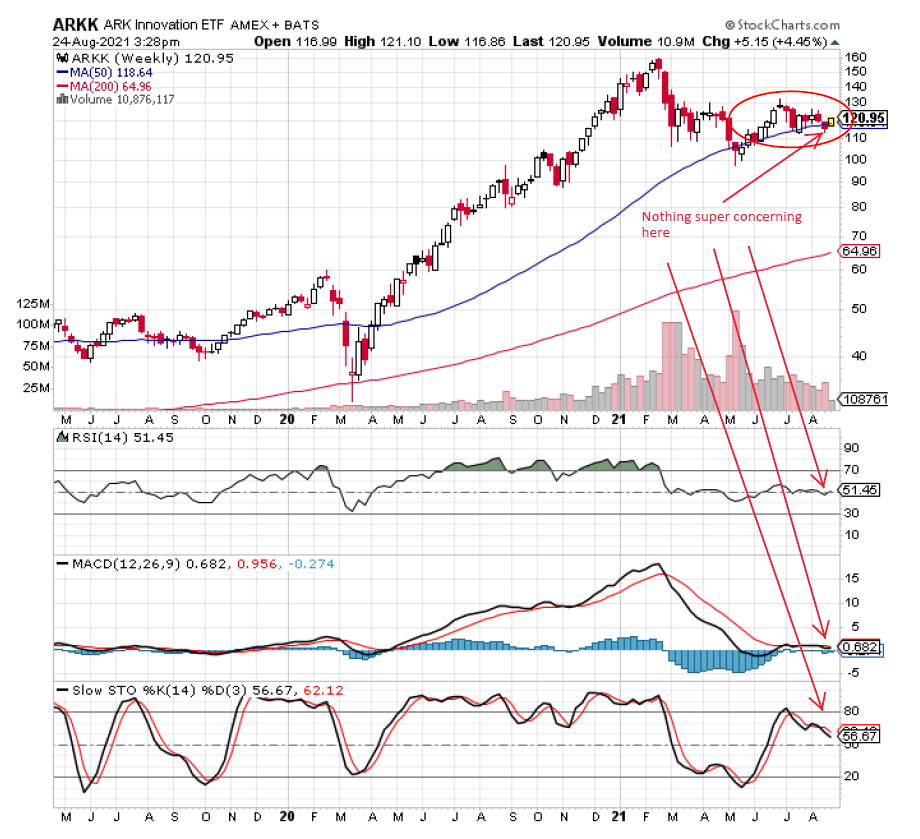 Just like the movie clip above, if investors have bought in to Michael Burry’s view of valuation, they better be in for a ride, because he’s likely early. Then again, he bought Puts (bet that the stock will go down), so he only has a set amount of time to make that profitable. We’ll keep you informed on how the battle of titans goes.

Until next week, enjoy the nice weather and continue to be safe.