There has been a persistent valuation discrepancy between the U.S. equity market and international markets for some time now. The culprits have been relatively easy to identify, and while we hesitate to pick on Europe, we would highlight major political uncertainty (Brexit and Frexit, anyone?) and the need for structural market reforms across the continent, to name just two. Try launching your startup in France if you doubt the latter point.

Consider that the Ned Davis Research P/E (price-to-earnings) ratio for the S&P 500 using “normalized” earnings is at 20.85, well above the long-term average of 16.5 and approaching levels last seen in September of 2007, when the same P/E was 23.6. Recall that the S&P fell 56% from there to the bottom in March 2009. While domestic market bulls may counter that the S&P could rise another 14% at this level of earnings to achieve September 2007 valuations, we would argue that things are getting a little expensive here at home, and that September 2007 is represents a dubious benchmark at best.

To be clear, we are forecasting neither an imminent recession nor a 56% drop in the S&P at this time. Likewise, we do not subscribe to the idea that “things are just the same as last time,” as there are some fundamental differences (both to the positive and the negative). Regardless, you can’t simply say “things are different this time” and ignore what is staring you in the face. At these P/E levels, the upside for US equities becomes more constrained barring a meaningful increase in S&P earnings, which will be hard to come by without meaningful increases in economic/GDP growth. Hence the necessity to look elsewhere for meaningful, sustainable upside to complement US equity exposure.

Below, we have included some charts (complements of JP Morgan Asset Management) that illustrate the relative valuation levels of select international sectors: 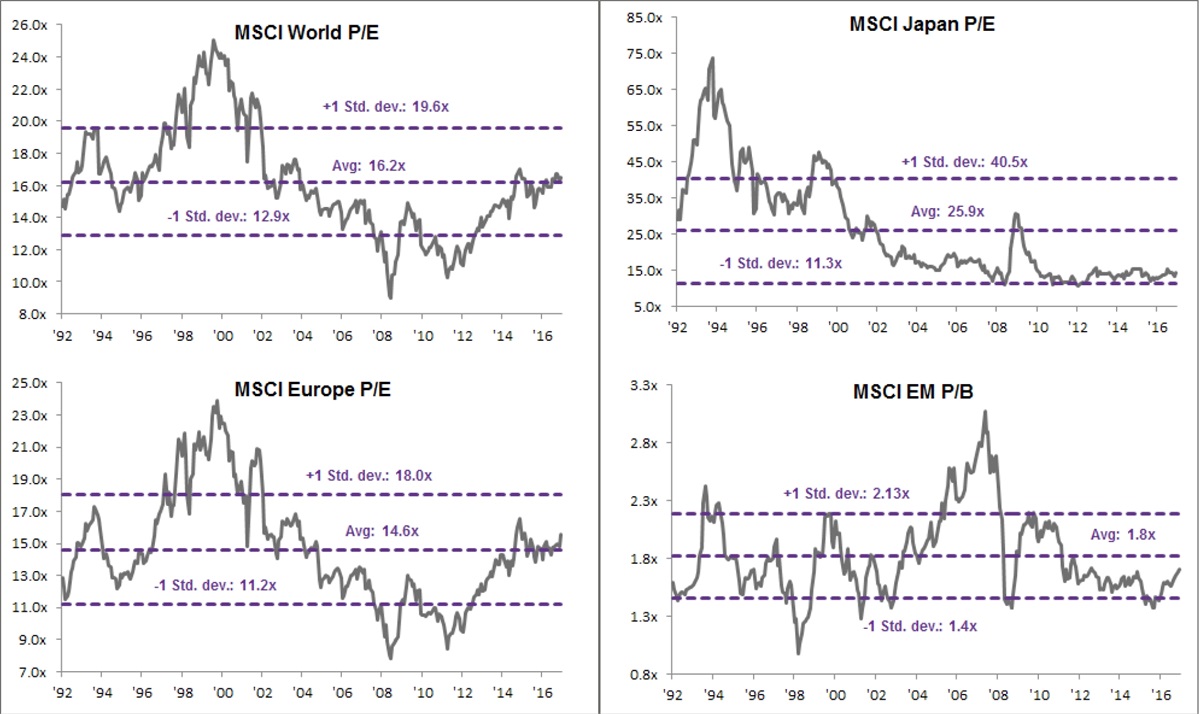 Again, we bring all of the above to the reader’s attention not to argue that US equities are facing an imminent correction, but instead to highlight that the international space provides a strong diversifier and a higher probability of meaningful returns over the intermediate term (in our opinion). It is in light of all of this that we have been gradually increasing our exposure to the international equity space, with another meaningful increase happening over the past few days. Simultaneously, we have reduced US equity exposure by an equivalent amount. As always, we invite your questions and comments.