Most of us are familiar with the old market adage ‘Sell in May and go away.’ Running from May to the end of October, it does work from time to time. It doesn’t hurt that those months include the September and October months that tend to be the most seasonally weak of the year. The problem is it doesn’t work every year, and of course, you don’t know in advance which years it will or won’t work (crystal ball is still in the shop). That being said, the May 1 to October 31 period was up only slightly for 2019.

Below is a chart that breaks out the seasonality trends since 1950. You can see that the average return for the May to October 6-month period since 1950 was 0.65%, while the November to April period averaged 7.47%. Makes you just want to put money to work during the seasonally strong period, right? 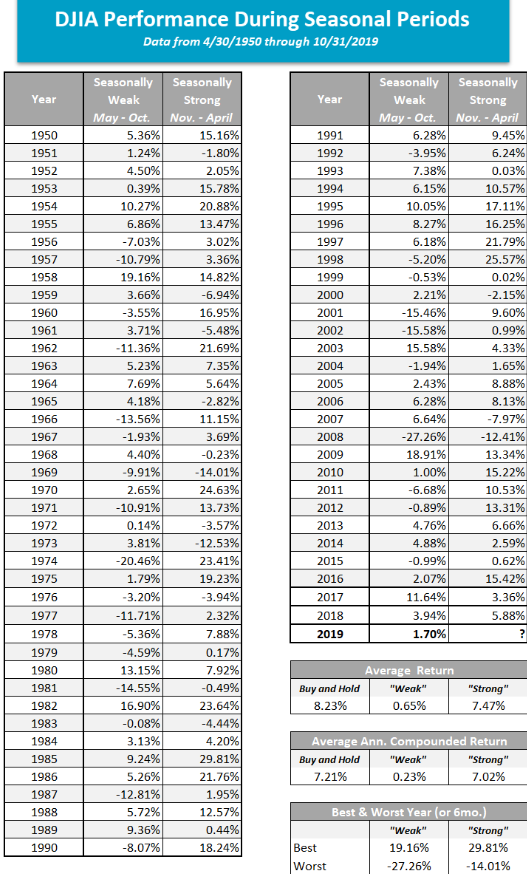 If it were only that easy. 2017 is the most recent year where that didn’t work. 2007 was another example of when the formula didn’t work. Perhaps you’re seeing two realities emerge:

If we look closely at the seasonally weak time periods, we find that there are many years the contribute to significantly skewing the numbers.

Let’s take a look at those periods on the charts and see what was going on during those periods.   You can see that most of these periods involved recession, one-time events, or excesses that needed to get corrected. Today, as we have been arguing, we don’t see a lot of excesses in the financial markets. We do see excess debt at the government level and some in the corporate world, and we do see some extended valuations (but nothing too crazy).

We are never going to be able to foresee an event like 9/11 or even Black Monday. We do, however, believe that if we pay attention to what the market is telling us, we can get hints on how much risk is built into the markets as a whole. From that we can try and position portfolios in a way to take advantage of the situation (knowing of course that nobody knows the future).

While ‘Sell in May and go away’ historically works, it only really appears to represent a lot of value if there is economic instability like a recession or important geopolitical event (remember that correlation/causation thing?). The former didn’t seem likely to us back in May, and even now it doesn’t look like it’s around the corner. Remember, if the “market” is a discounting mechanism, and it is hitting new highs, it’s not telling us that the economy is headed into recession in the near future. One could argue that the yield curve inversion was a precursor to a recession, but it’s also just as likely that the curve inverted because of world bond rates and global investors saying that relative yields in the U.S. were too good to pass up.

This will not last forever, and we still believe we are closer to the end of the business cycle than the beginning. We must continue to pay attention and watch our indicators for signs of deterioration in the market. We still remain cautiously optimistic and expect the market to continue to new highs into the end of the year and first quarter of next year.