Robinhood – Taking from the Rich and Giving to the Poor?

We’ve mentioned Robinhood before, but there doesn’t seem to be any stopping millennial traders from piling into “story” stocks. We spoke about many companies in the past, most notably some of the airlines and cruise lines. We also talked about bankrupt companies like Hertz that went from $0.50 to over $5 in a matter of days. Now if you were lucky enough to buy at $0.50 and sell at $5, good on ya mate! My guess is that was none of you, nor was it many that piled in in pursuit of instant riches. Let’s take a look at the volume/price chart to see when most bought the stock. 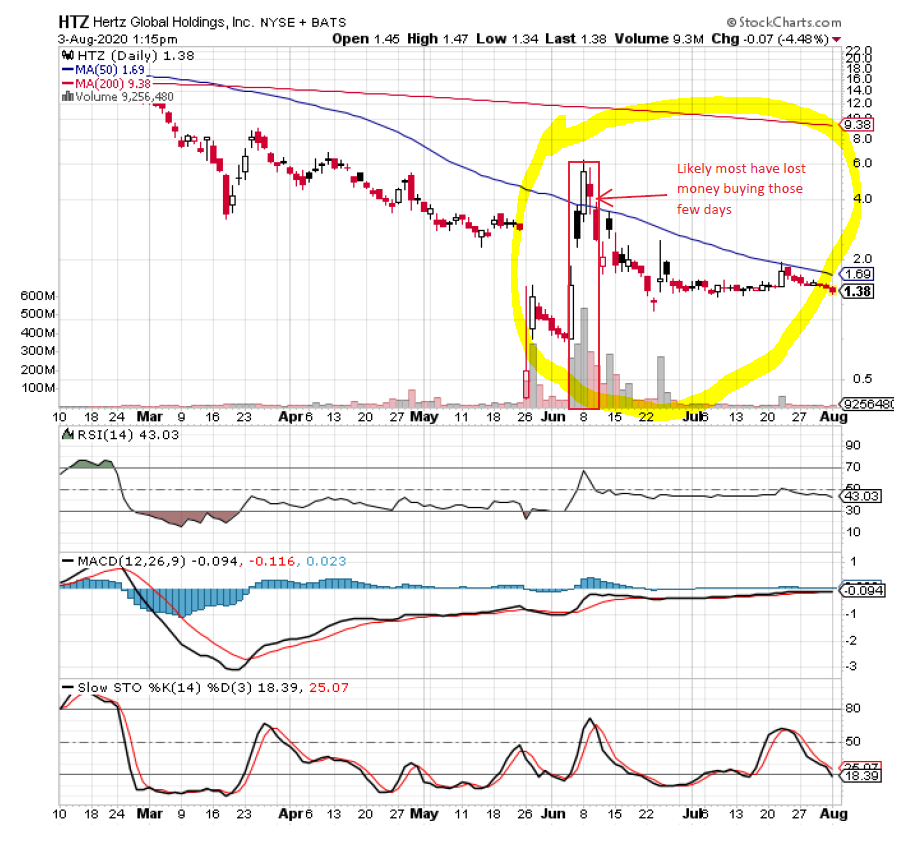 We now have a bit of history to see how that worked out, I would venture to say for most, not so well.

Let’s take a look at the latest “hot” stock that Robinhood traders are piling into. For those of us that are of a certain age, we remember Kodak. They used to be the leader in photography before they completely missed out on digital photos. They were a household name. Fast forward to now, to be honest, I didn’t even know the company was still in business. Apparently now they are going to be making the basics for generic drugs in the U.S. So out of nowhere, Robinhood traders jumped on the stock (after the announcement) and roughly six times (6x) the number of accounts owned shares of Kodak(after the news came out). Take a look at the chart below, you can see if they were early on the bandwagon, they are likely still making a little bit of money. Otherwise they are losing money again. We will review this in a few weeks to see where those Robinhoodies are at. Likely they will have jumped off that train and jumped on the next stock du jour. 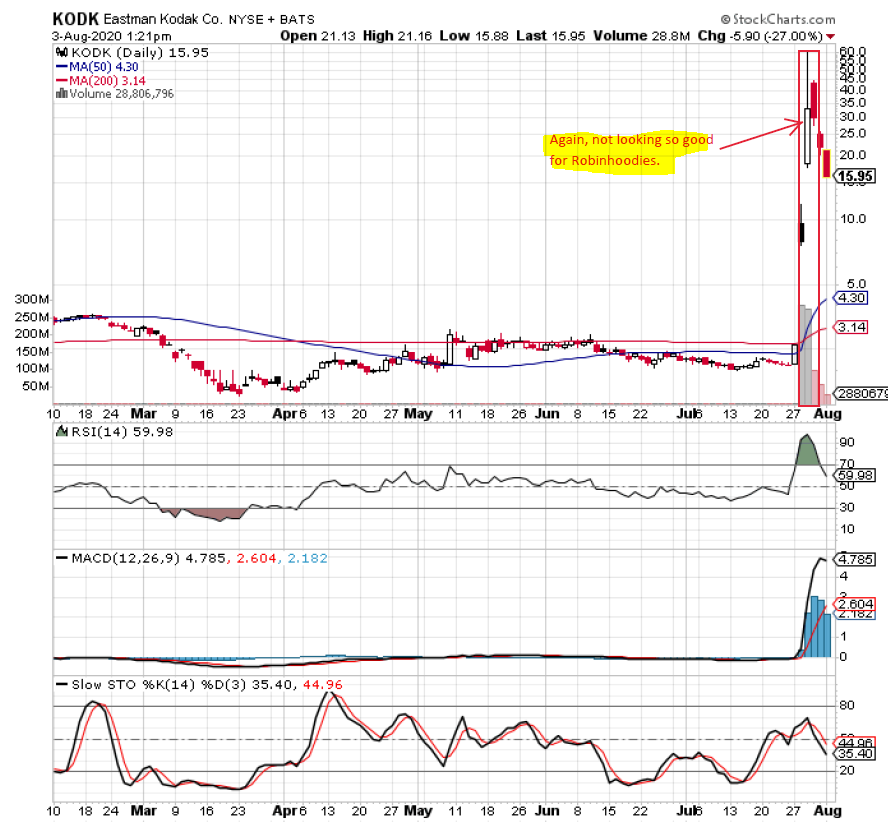 Of course, I won’t be able to know exactly the gains/losses. I think in general terms you can see that most people are likely losing money on these “story” stocks. I think likely the ones really making money on the Robinhoodies are the hedge funds and HFT (high frequency trading) firms that pay for order flow (PFOF) and try to profit off of trading behaviors they see in this trove of data. It’s also very beneficial those Accredited Investors that are allowed to buy private shares of the company. So is Robinhood really a misnomer? Perhaps its anti-Robinhood. Ok, I’ll stop there before I go down another rabbit hole. 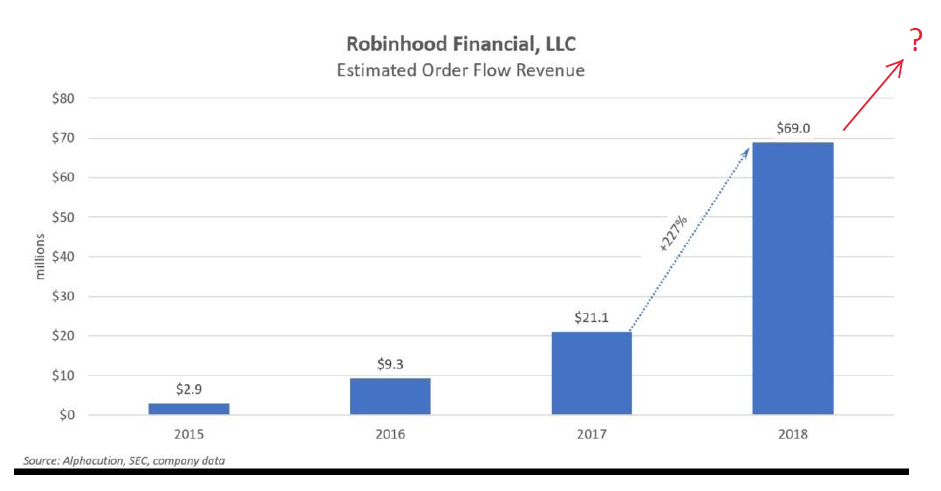 I would like to bring up one last topic that has been very puzzling for us and many others. Usually, stocks and bonds are negatively correlated, meaning when one goes up, the other goes down. This is the reason why it traditionally makes sense to have both in a portfolio (it’s a bunch of geeky statistical stuff I won’t get into now). What we have seen recently is the opposite. As stocks have rebounded, bonds yields have gone to new lows (which means prices have gone up). So what story is this telling us?  Let’s look at the charts first as a point of reference.

If stocks are going up, that would typically signal the economy is getting better. Now, we’ve discussed this in the past and yes, from a complete shutdown of the economy, things are getting better and yes, there has been plenty of help from the Federal Reserve and the government putting money in the system through monetary and fiscal stimulus.

Part of the equation is that the Federal Reserve is continuing to buy Treasuries and that helps keep a lid on rates. But when we look at investor behavior, we are still seeing money leaving stocks and flowing into bonds. At any rate, when rates go down, you would expect that to be a reflection of an outlook for a weaker economy.

Or maybe it’s as simple as short-term interest rates at zero(ish) and there is so much money put into the system over such a short time period that the money has to go somewhere and it finds its way into everything. Housing, precious metals, bitcoin, stocks, bonds, art, collector cars, etc.  Does that mean that there will be some kind of hangover when this stimulus is done? Or will we now be in a constant stimulus state and debt doesn’t really matter? Below is a recent recent quote by Seth Klarman, founder of hedge fund Baupost Group.

“Surreal doesn’t even begin to describe this moment,” Klarman said in a letter to investors reviewed by Bloomberg News. Investor “psychology is surprisingly ebullient even though business fundamentals are often dreadful,” he added….

“Investors are being infantilized by the relentless Federal Reserve activity,” said Klarman, who runs hedge fund firm Baupost Group. “It’s as if the Fed considers them foolish children, unable to rationally set the prices of securities so it must intervene. When the market has a tantrum, the benevolent Fed has a soothing yet enabling response.”

Not sure I could have said it better myself, except without all those big words. Ebullient…really? I’ll stick with cheery :).

As always, we welcome your comments and questions. In the meantime, we’ll continue to test our assumptions, dig into our research, and lean into our model as we seek to be ever mindful of risk while pursuing long-term returns for your portfolio. Welcome to August!