After a bit of a hiatus in the writing department, we are back...and you’ll quickly realize it is Jeff writing here, as the topic is earnings! We hope your year is off to a great start. The equity markets certainly are. We have fielded no shortage of questions about whether this trend in the market will continue. As you know, we don’t have a crystal ball, but we do have good data, and let’s start the year by looking at some of this good data as it relates to Q4-2017 earnings.

Since most of us “think in pictures”, the charts below compare the results thus far with what we have seen from the same group of 89 index members in other recent periods. 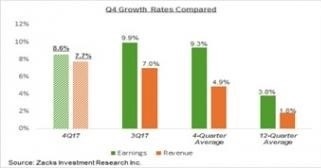 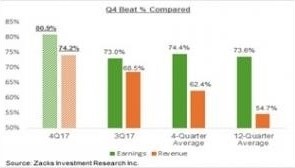 While Q4 earnings growth for these 89 companies is tracking below what we had seen from the same group of companies in the preceding periods, the revenue growth pace as well as the proportion of positive EPS and revenue surprises are tracking above historical periods.

The next two charts below show that there is clear momentum on the revenue front, with both the growth pace as well as the proportion of positive top-line surprises tracking above historical periods. 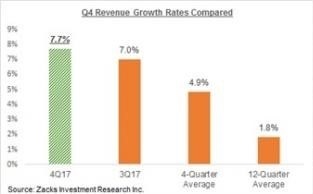 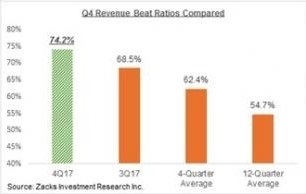 We want to highlight the unusually positive revisions trend for the current and following quarters. The chart below shows how 2018 Q1 earnings growth expectations have evolved since early December. This is a sight that we haven’t seen in a very long time, and certainly not over the last 6 years. 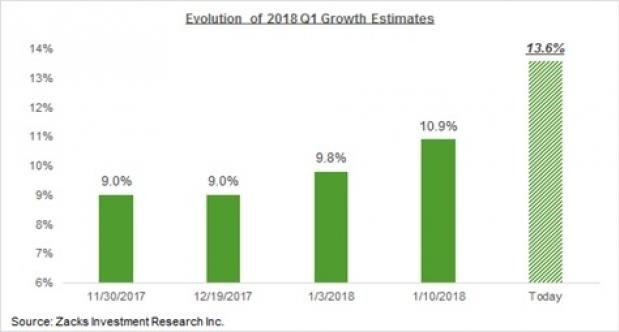 The most important factor driving this positive revisions trend is the tax cuts. The rise in oil prices and the impact of uptrend bond yields on banks’ profitability are some of the other factors.

The final chart below contrasts the Q4 earnings growth rate with what was actually achieved in the last five quarters and what is expected in the coming four periods. 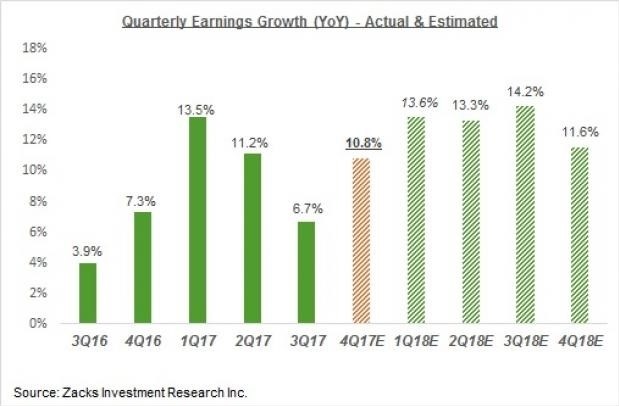 So while it appears that the market is perhaps getting ahead of itself in the very short term, powerful earnings and revenue trends underneath are driving the move higher. We will remain ever vigilant in the weeks and months ahead for signs of gross excess on the domestic front, and remind current MPCA clients that we have been tactically increasing portfolio allocations overseas over the past year to capture more attractive values there.

Information from Zacks Investment Research was used in generating this report.