Picking up pennies in front of a steamroller? 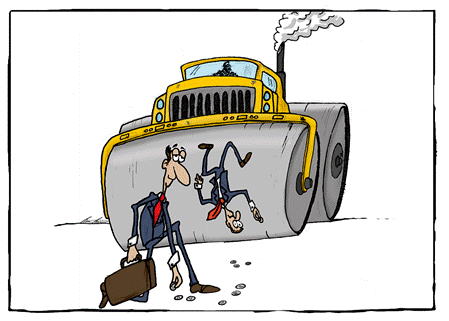 We’re going to start today with a few comments on inflation – again. It seems to be more than a “transitory” topic in our blog these days (with a 6.2% print today that marks the largest 12-mo increase since November 1990, it’s hard to ignore), though we’re going to turn our attention to how some of the drivers of inflation may be further illuminated by increased spending coming out of D.C. and the potential pitfalls that come with that.

We’ve said that inflation will run higher than normal and for longer than we might like to see but that we would still call inflation “transitory.” What? When we say transitory, we are not measuring in months, but more like several years. Then we will likely see inflation moderate. Part of that reason is that inflation is measured on a year-over-year basis. It’s difficult to have inflation grow at the rate we are seeing for years when compounding on itself. Yes, many of the pressures – like supply chain bottlenecks – will subside, and likely pretty soon. However, we have to acknowledge that some of the inflation pressures we’re seeing are going to be tough to roll back, with wages being at the top of the list. 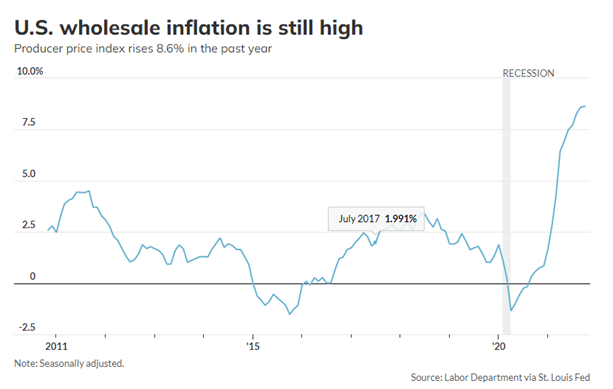 Wholesale gasoline prices are up 53% from a year ago, which is one of the contributors to the above inflation chart. If we strip out food and energy, the “core” rate of inflation falls to 6.2%. Still high compared to what we have been used to over the last 20 years and not a number many people baked into their long-term (or even short-term) plans.

So why are wages up and supply constraints lingering? On the wage front, it’s a simple case of supply and demand. We simply don’t have enough people wanting to fill the jobs that are open. That has been a developing issue for years that was undoubtedly made worse by COVID. Many have retired or left the workforce prematurely – including some reading this blog – and simply are not going to go back, leaving a shortfall that we have to find a way to make up for. In our opinion, this needs to come through a combination of technological advances and immigration reform. Technology will undoubtedly fill the void in many roles, but that change takes time (it’s certainly underway). Otherwise, more workers are needed, and immigration needs to be a part of that solution.

So, with all of these challenges, are we getting ahead of ourselves in passing a $1 trillion infrastructure bill? Surely the US needs to see improvements to its infrastructure and the federal government has a role to play in these critical investments. However, with labor force participation declining, unemployment rates back below 5%, an immigration system many believe to be broken, inflation pressures at generational highs, and the Fed seemingly low on ammo to manage the economy through a downturn, are we putting the proverbial cart before the horse in dropping a cool trillion on public works projects? Do we need reform in other areas before we pick up our shovels?

In case you’re interested, here is a taste of what’s in the recently passed legislation:

Don’t forget, there is another (larger) bill that the President and many in Congress want to pass. That could be another $1.75 trillion in additional spending, with significant tax increases to help offset the cost.

While we certainly have our opinions on all of this, our job in this blog is not to argue the merits but instead to look at the implications. As we do, the first question we ask is, “Who’s going to do the work?” Do we have the labor force necessary to pull this off, especially without further pressuring wages to levels that will cause inflation to go well beyond transitory?

We also wonder the implications of some of the mandates in the bill, such as those that clearly favor some businesses over others. An example would be Ford (union) vs. Tesla (non-union). You can decide for yourself what you think of Elon Musk, but it’s clear that his efforts with Tesla have changed the game in advancing next-generation battery and electric vehicle technologies and creating robust market demand for EVs from zero. We love to see private enterprise do this work with minimal interference, as we believe it yields better products for the market and greater wealth creation for stakeholders (though, yes, we’ll admit Tesla was aided early on by generous EV tax credits). How will the economy and the markets react to a larger government hand in the mix?

The reality is that this bill is passed. Nothing is going to change that, and so we, as investors, have to digest what it means for the economy and for the markets, while also keeping our eyes on what else could be coming down the pike. As we look ahead, it’s hard to ignore the Build Back Better legislation and it’s potential $1.75 trillion price tag. It’s also hard to ignore that many of the challenges we detailed above are stubborn ones that require hard work, sacrifice, political courage, and a wee bit of luck to overcome. As we wrap up, we wanted to share this quote and then give a quick comment:

We love the idea of creating millions of new jobs. There is such meaning and dignity derived from good, honest work. Nothing will ever change our opinion on that. But are we creating millions of jobs we simply don’t have the workers for? If so, inflation will persist for a while and the Federal Reserve will be forced to start raising interest rates sooner than they originally thought. Remember, the bet Jeff and I have is 3rd quarter of next year (for the initial rate hike). Every recession has been caused by the Fed tightening monetary policy. I would expect this time to be no different, though I can hope. As far as picking up pennies in front of the steamroller (in the markets)? I don’t think we’re quite there yet, but we could get there pretty quickly, so we need to be paying attention.

Ok, that’s enough for today. Thursday is Veterans Day. We send sincere thanks to all of our veterans and remember the sacrifice they and their families have made and continue to make for our freedom.