Omicron and Jerome Powell bring coal to the market?

If anyone was paying attention to the market instead of Black Friday sales, you might have seen a big sell off. The Dow Jones Industrials were down over 1000 points at one point, to eventually close down 800 points. 1000 points sounds scary, and it is a big number, but when the index is in the 34,000 range, it turns out it’s around a couple percentage points. Not so scary when put in perspective. Below is the S&P 500, which you can see that gap down on Friday with a slight rebound on Monday, followed by a couple more crummy days on Tuesday and Wednesday.  Things are looking pretty oversold at this time. 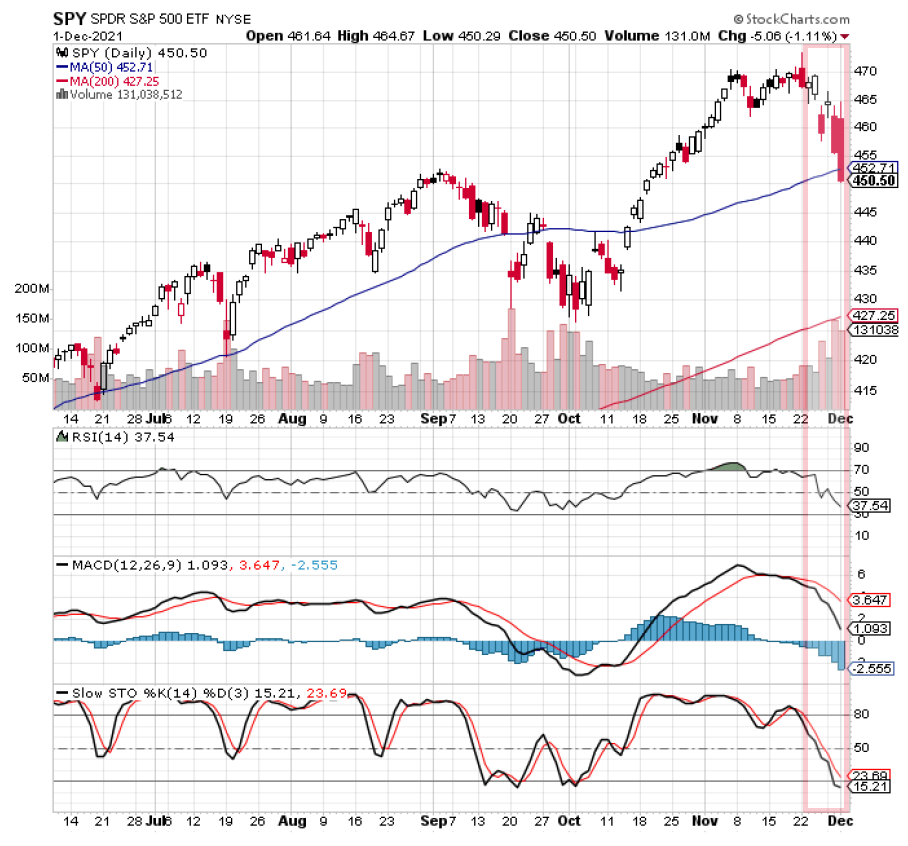 So here we are on Wednesday and the markets are worried about the new COVID strain and FED Chair Jerome Powell upping the rate hikes and removing the word “transitory”.

Below is a quote from Jerome Powell.

When all else fails, try to change the definition of your previous term.  If that doesn’t work, just pretend like it never happened.  Let me give you another headline from that same press conference.

Really, does he honestly think that inflation is coming down that fast? Or is he really trying to give himself enough time to walk back what the FED and the Fiscal spending have done to the economy? What do you think? We’ve been clear about our opinions.

On a different note. Prior to the Black Friday mess, the AAII updated their Sentiment Survey (we’ll see what the new survey looks like tomorrow). You can see that the market bullishness has come down from a couple weeks ago. That also ties into the technical readings we see in the S&P chart above.

So, was this a shot across the bow, or is this the start of something much worse? As you know, we have said the markets are relatively expensive (not as bad as 2000), but something to pay attention to. The FED and the Federal Government have put massive amounts of money in the system so that we wouldn’t go into a recession. And that worked (but the bill must come due at some point). It was the shortest turnaround in history. Below is a chart of M2 money supply adjusting out currency in circulation. You can see that M2 tracks that 6% growth rate…until COVID. 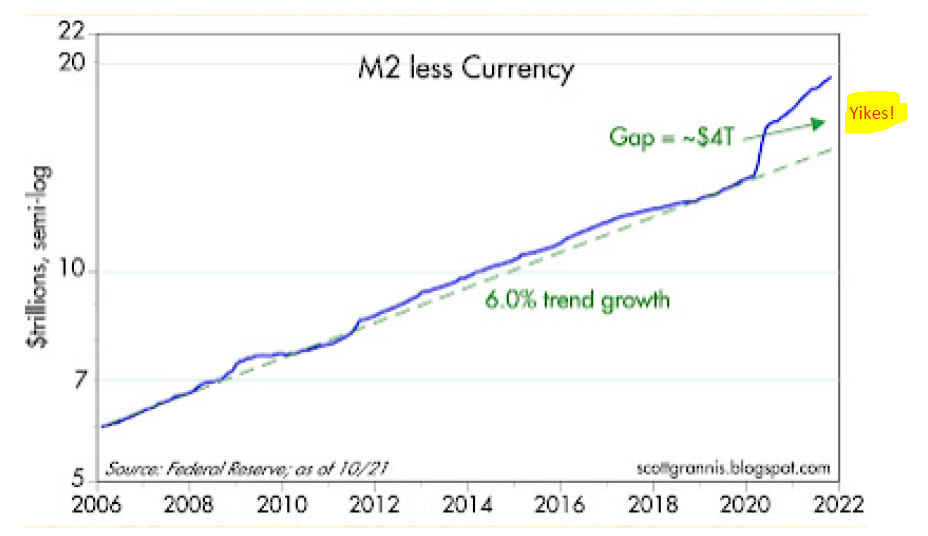 That should roughly track nominal GDP growth over time. Now we have an excess of $4 trillion that was put in the system, not to mention the $1T added for infrastructure in the coming years, and a potential $1.75T for “social infrastructure” on an undetermined timeframe. Right now, you have a tub that is overflowing with water, and we are looking to add more water too it. Would it be any surprise to find out that that adds to our inflation problem we have mentioned many times before? Not saying this stuff isn’t well-intentioned, but maybe ill-timed.

You can see the yield curve above (10yr-2yr) has been trending down since April of this year. One of two things is likely going to happen. The above chart will continue to tighten and will forecast a slowdown in the economy, or the long end of the curve will finally break free to represent the inflation that is all around us (maybe both, depending on the timeframe).

To finish this week’s blog, I will bring in our good friend SentimenTrader. They noted a cluster of warnings over the last week or so.  Scary terms like Hindenburg and Titanic warnings. With names like those, who wouldn’t be scared? Let’s take a look. 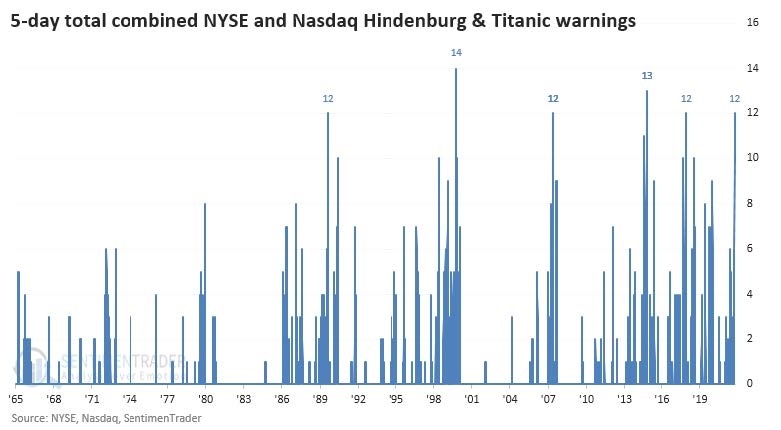 And those warnings have produced the next chart’s subsequent performance. 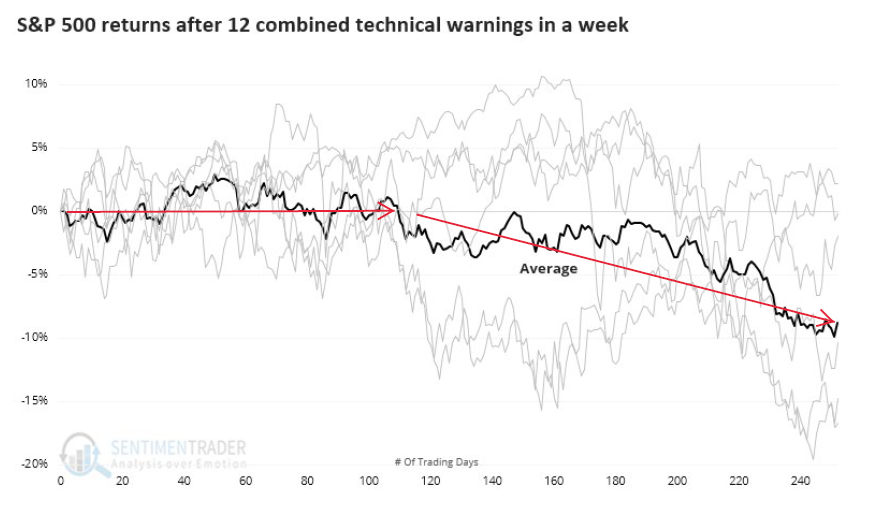 You can see in the above chart that, on average, the market trends sideways for a few months after these warnings. We are in the “Santa Claus rally” time of year, so unless things really get out of hand, I would expect things to hold together alright (last couple of days not withstanding), but at a minimum this should be on our radar, as many of our other indicators have started to show concern. We will keep watching them and follow the process.  Keep in mind that the markets are discounting mechanisms, and they typically discount 6-9 months ahead.  If that’s the case, and rates are going to start going up by the 3rd quarter of next year, we might be close to the end of this bull market. Or the FED will just keep spiking the punchbowl.

Until next time, I hope you had a good holiday and continue to stay healthy.