Stocks are off to a weak start this morning, running counter to the hopes raised by Friday’s strong rally. The culprit, again, seems to be weakness in oil prices. As a matter of fact, oil and equity prices have been strongly correlated lately, with stocks following the direction of the price of crude on a daily basis - as is seen in the chart below. 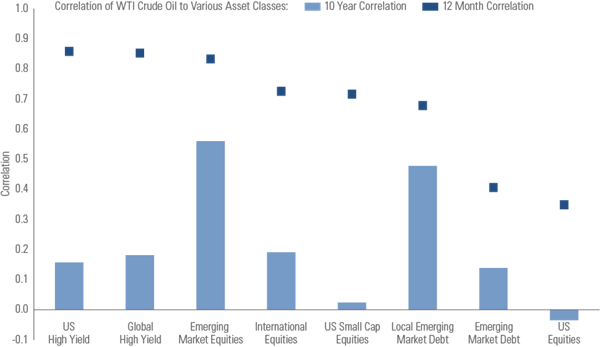 Chart Source: Bloomberg and GSAM as of December 31, 2015. Past performance does not guarantee future results, which may vary.

On the surface, this close correlation between oil and equity markets makes little sense, since most of the world’s major developed economies are oil-dependent, meaning they benefit from lower oil prices. One would think that savings at the gas pump should be acting as a fiscal stimulus similar to a major tax cut, with the added benefit that this “tax cut” has no negative effect on the government’s finances.

So how does good news become bad news? The only interpretation that makes sense is if crude oil weakness is seen as a function of falling demand (read: global economic weakness) and not as a result of successful oil and gas exploration catalyzed by technological innovation. In this more negative scenario, China uncertainty, commodity price weakness and questions about the health of the global economy get tied into the daily price movements of crude oil. As long as this negative feedback loop dominates investor psychology, the market correction will continue and will threaten to tip an already tepid global economy into recession.

This year’s market turmoil has changed things for the Fed as well, with many now expecting the central bank to indicate a pause in its tightening cycle as members begin deliberation tomorrow. While few believe that a January rate hike is in the cards, expectations for the March meeting have begun to moderate as global market weakness dominates the headlines. The Federal Open Market Committee (“FOMC”) statement coming out Wednesday afternoon will be heavily scrutinized for any hint of concern about the uncertain international backdrop or perceived risks to the committee’s growth outlook. No doubt the cautious commentary lately from other major central banks around the world will factor in as well.

The U.S. manufacturing sector would certainly welcome a more dovish Fed, as the strong dollar has been problematic for commodity-related enterprises. Along with the manufacturing sector, major domestic exporters of all stripes have consistently cited exchange rate pressures in their earnings reporting for the past year, contributing to the current malaise in equities.

Our sources at Zacks Investment Research note that this week marks the heart of 4th quarter 2015 earnings season, with 129 S&P 500 companies reporting. Including this morning’s reports from McDonald’s (MCD), Halliburton (HAL), Kimberly-Clark (KMB) and others, we now have results from 77 S&P 500 members that combined account for 20.3% of the index’s total market capitalization.

Zacks calculates that total earnings for these 77 companies are up +0.3% from the same period last year on -0.1% lower revenues, with 70.1% beating EPS estimates and 42.9% coming ahead of revenue estimates. Other than the earnings beat ratio that is about in-line with other recent periods, this is weaker performance from this group of 77 index members than we saw both in the third quarter of 2015 and the trailing four quarter average.

Looking at Q4 as a whole, combining the actual results from the 77 companies that have reported already with estimates for the remaining 423 index members, total earnings are expected to be down -6.6% on -4.6% lower revenues, which marks the third quarter in a row of earnings declines. Even excluding the significant drag on earnings from the energy sector, the Q4 growth pace is still slightly negative. Recall that earnings growth for the S&P 500 managed to stay positive ex-energy in the second and third quarters of 2015. Such earnings weakness is but one more brick in the current wall of worry.

Regarding our current positioning in MPCA portfolios, we reiterate our closing comments from our update two weeks ago:

“Here at MPCA, deterioration in many of our short- and intermediate-term market breadth indicators have dictated removing our exposure to domestic midcap growth as represented by the passively-managed Vanguard exchange traded fund (“ETF”) symbol VOT across all risk tolerances. This decision raised approximately 7% for lower risk-tolerant accounts and up to 14% cash at the higher risk end of the spectrum. While we continue to retain midcap exposure in both active and passive vehicles, the defense is clearly on the field at the moment. We believe the risk of more significant downside has increased, according to our portfolio construction decision-making process. The cash raised will serve the dual purpose of softening portfolio volatility and keeping powder dry for more attractive risk/reward entry points. As always, we welcome your thoughts and comments.”