As many of you know, we are big fans of innovation, with the thought that companies that don’t innovate and keep up with the change in technology are doomed to be run over by smaller more nimbler ones. We have seen that happen time after time in the past, and change is happening even faster today than in decades past.

On the eve of the largest IPO in history (likely one you’ve never heard of), it spurs a conversation about change and innovation. The most successful people I have seen have been ones that could adapt and change with the changing business landscape. Those that tend to have their feet planted are likely to be unable to make those changes. Makes me think of the old Wayne Gretzky quote to the question, “Why are you so good?” He said he skates to where the puck is going to be, not where it is. Given the pace of technological change, it’s hard for us to see where the puck is going because in many cases we’re not sure where the puck is currently.

Take for instance Biotechnology. I have been on record as saying that if we all can live another 10 years many diseases and ailments today will be treatable or cured within that timeframe. Sounds like big talk, but do you realize that scientists can grow heart muscle cells to repair damaged parts of the heart? That’s just one example of how the health industry will change. On the more basic level, the way we get care is evolving, as COVID has brought telemedicine to the forefront. This is an area that previously struggled to get traction, despite the benefits it clearly presented.

Getting back to the largest IPO, it will be a company called Ant Group, a spin-off of Alibaba in China. Ant, which runs Alipay in China, is one of the top “digital wallets” in use. Some of us in the U.S. might be more familiar with companies like Square, Venmo, or PayPal that handle cashless transactions using “digital wallets.” For us older folks, if we have a digital wallet, it is usually tied to a checking or savings account at a traditional bank. In many cases, younger people have no “traditional” banking relationship and keep all their money in a digital wallet (yes, you can now exist completely without a traditional bank account).

Many “Fintech” companies were some of the biggest beneficiaries of the PPP program during the early months of COVID.  In the graphic below, you can see that Square not only processed 76,000 loans and $820 Million, but 60% of those loans were to new customers. 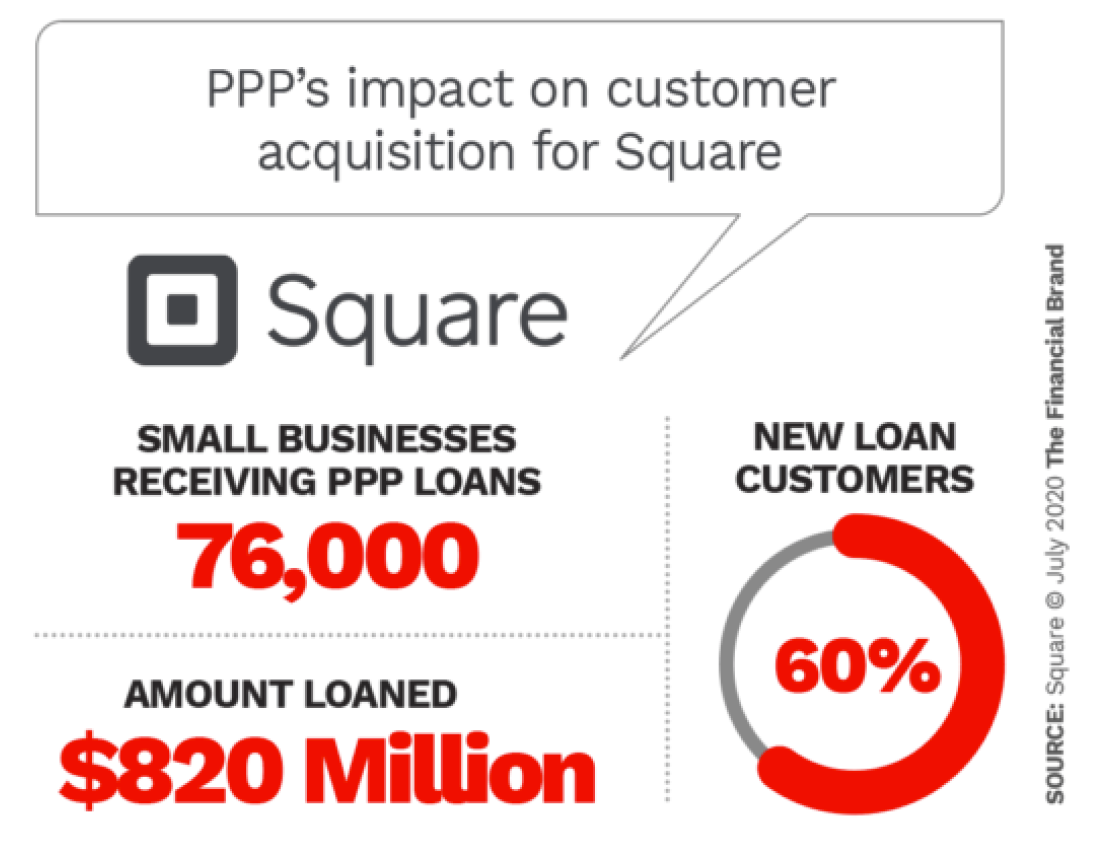 To look at the bigger picture, below you can see that the growth in Fintech is far outpacing traditional banking relationships. The purple and green lines below are Cash App (Square) and Venmo (PayPal). They are clearly growing their customer base, while you can see that Wells Fargo has no growth. There are many private companies that you will likely see go public over the next year or so, like Klarna and Affirm that are worth multi billions of dollars.

We have heard for years about the coming “cord cutting” in television. Most of us feel like we pay too much for cable TV, but there haven’t been good alternatives, so we continue on paying those bills. We have seen the numbers come down over the last 10 years and we would expect that to continue. The chart below shows the number of “linear” TV households in the U.S. (Andrew adding a comment here – I am actually taking a break right now from helping my parents cut the cord in order to edit this newsletter…so you can add one more household dropping off this chart below).

While there is likely to be significant volatility around the election, the longer-term trends of innovation will continue to persist. Internet-of-things (IoT), the eventual death of the internal combustion engine (ICE), medical advances, decentralized finance (DeFi) and many more innovations will continue to develop and we can continue to skate where the puck will be – both to improve our way of life and our investment portfolios.

Two last charts. Way back when (end of 2017), there were many people talking about this new thing called Bitcoin.  Many had heard about it and nobody knew what it was.  As usual, most of the hype was surrounded by the hyperbolic price action of Bitcoin itself, not the technology. 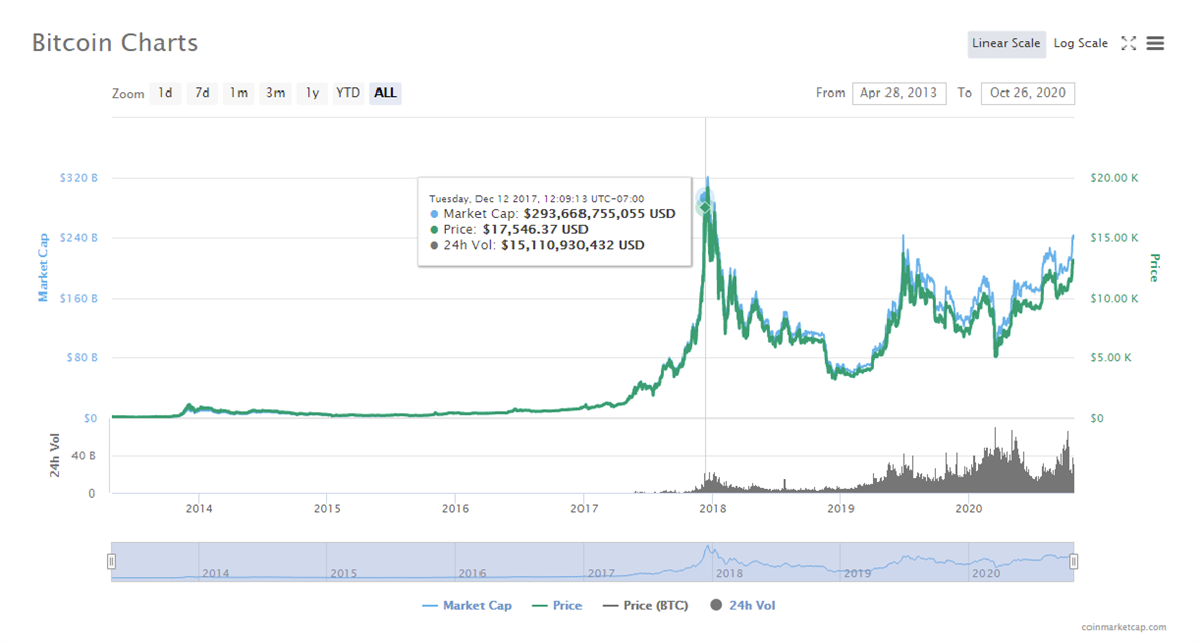 Fast forward three years and the price had been cut by 80%+ and, as usual with burst bubbles, the hype is gone, and nobody talks about it. This year, Bitcoin has almost doubled in price and not many people are taking notice. Meanwhile, the institutions are starting to figure out that the idea of DeFi and distributed networks are durable and we are likely in the early stages (similar to the mid-90s for the internet) of this innovation. 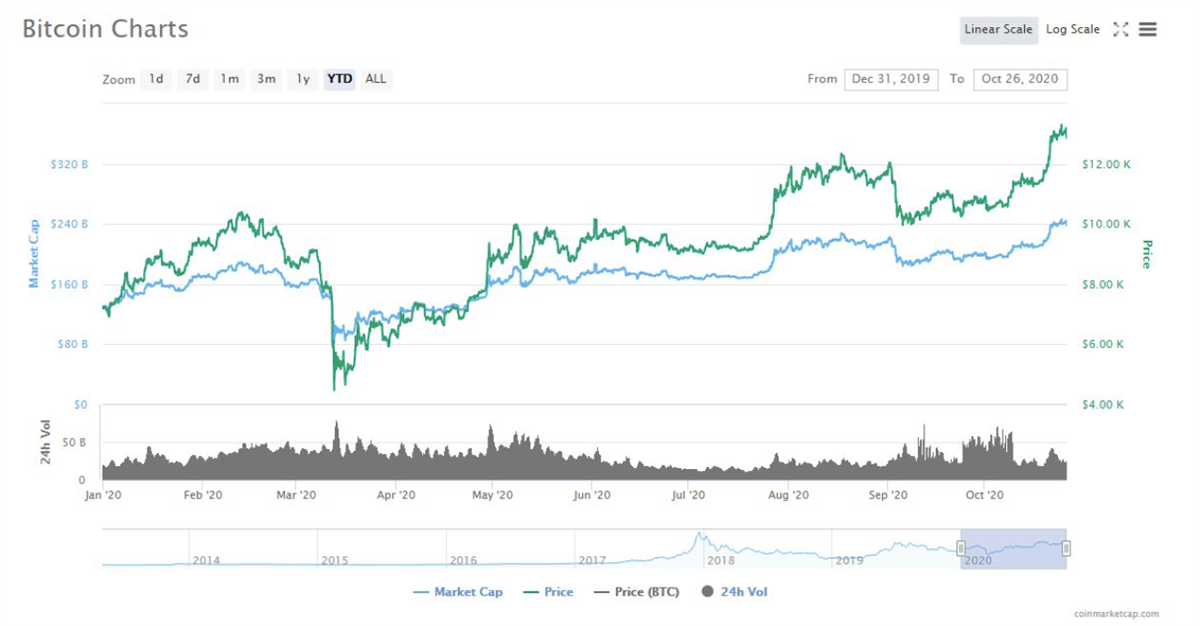 If you are interested in looking more into innovations and some industries that are likely to go the way of the horse and buggy, take a look at the piece here.

As always, we welcome your comments and questions. Expect there to be some volatility going into the election and hopefully we will quickly find out who the winner is. If not, you can expect some volatility around that uncertainty as well. In the meantime, we’ll continue to test our assumptions, dig into our research, and lean into our model as we seek to be ever mindful of risk while pursuing long-term returns for your portfolio. Now get those votes turned in!