Now we find out who pays for it

Ok, we knew what the answer was long ago, but now we see it all laid out. To pay for the new $3.5T “human infrastructure” spending, House Democrats have proposed significant changes to the tax code. Some of the headline changes include:

In addition to those increases, the administration estimates $700 million in cost savings from Medicare drug pricing and an increase in taxes due to economic growth of $600 million (or as I like to say, the Popeye bargain; ‘I will gladly pay you Tuesday for a hamburger today’). See link here for more info.

Also of note, the ability to utilize “backdoor” Roth contributions and the so-called “Mega-Roth” contributions will be severely curtailed. Many of you have done the “backdoor” Roth, as that has been a good tool for higher wage earners to get money into Roth IRAs. Keep in mind that your ability to contribute directly into a Roth IRA phases-out at $140,000 for single filers and $208,000 for married filers. Many of the conversions will phase out at taxable incomes above $400,000, and the “mega” option will lose much of its attractiveness regardless of income level. Full story here.

That’s certainly not all of the proposed changes (keep in mind, these are just proposals at this point…subject to lots of political dealmaking). As you read through them (here’s the full list), you may think that none really apply to you, and you may be right to an extent. I’d say be careful though, as I’ve always said if you own a house and/or have investments (that would be all of you) you ultimately will be the target of potential taxes.

Think what you may about these proposals and the efforts to tax corporations and rich, but we would point out a concerning stat recently published by the Tax Policy Center. Their recently released report of taxpayers from 2020 noted the following:

That’s a much larger percentage than normal due to the massive stimulus checks that were sent during COVID. 107 million households paid no tax, up from 76 million in 2019! I don’t have the numbers, but my guess is that we’ll see something similar for 2021 thanks to the latest stimulus checks issued earlier this year. With this, it’s no wonder why we see so many saying tax the “rich.” Of course, my experience is that “rich” is a relative term. I think we can all agree that a billionaire is rich, even a half billionaire is rich.  It starts to get interesting when talking about $50 million or $10 million. To many of us, those are the wealthy, but ask the person worth $10 million, they may say they are well off (they are) but aren’t quite wealthy. Everyone looks upstream to point out the “wealthy.” Coming back to that 61% stat, it’s our belief that more people need to have some skin in the game as we look to unite around a common good.  As the middle class has shrunk over the years and decades, we need to find ways to start expanding it again.

Switching gears, we have talked about this in the past, but job openings have topped 10 million jobs.

If we could train people for better paying jobs, getting people fully participating in the economy and getting the total number of job openings down, seems like a win for all concerned. And with “only” 8.7 million unemployed, it’s not about opportunities, it’s about matching openings with skills and abilities. Gainful, rewarding employment will always be the best stimulus and the best avenue to personal and collective growth, in our opinion.

Finally, as we see areas of the country becoming more restrictive with COVID regulations, let me pass on a couple charts that you may not have seen or be aware of. The first is daily cases in the US and the 7-day average. 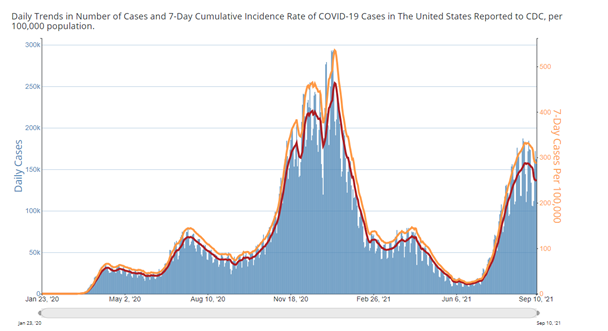 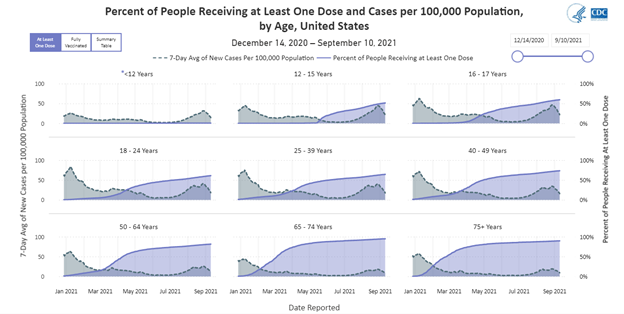 The next chart looks at the breakdown by vaccine type. 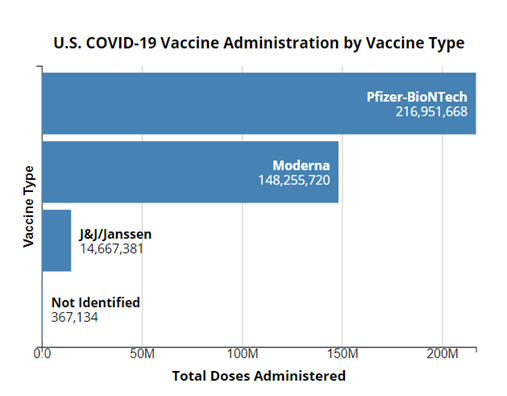 Pfizer is the leader, followed by Moderna.

We hope you had a good week. This is the last official week of summer and you can start to feel the nip in the air at night. Keep your fingers crossed that COVID rates continue to decline so that we don’t have to go through more restrictions.

Don't give another dollar...of cash!!!

Tis the season…for giving! Yes, we all like to receive – but I know many of you find even more joy in giving. While you may already be busy buying those gifts for under the Christmas tree (with all of the horror stories of...

As we head into the 4th quarter and another year quickly appears in the rearview mirror, it’s time to remind all of us that volatility is the norm, not the exception. We just finished a long run of no correction in the markets of...

What happens when mortgage rates go up?

“Skate to where the puck will be” is a great quote from hockey legend Wayne Gretzky. It’s as true in hockey as it is in the markets or life in general. Many times in the past we’ve said, if you invest based on...