Nothing like a War to get everyone on the same page

Russia has been moving assets to the Ukraine border since last year, so it’s been no secret that an invasion was a possibility. Of course, most of us being optimists, we had hoped that diplomacy would win out. And then, there’s reality. I’m certainly no geopolitical expert, nor am I besties with Vlad. So I’m not going to waste your time reviewing things you can and likely have seen on any news channel. But let’s just say that we are seeing some amazing bravery in Ukraine, in the face of a lopsided invasion.

Let’s hope the good guys (those on the side of freedom and liberty) prevail and we must remember that ‘Freedom isn’t Free.’ It’s easy to think about our way of life and the freedoms that we have, but those were won through sacrifice of those that came before us, and those that are still with us paying that price. 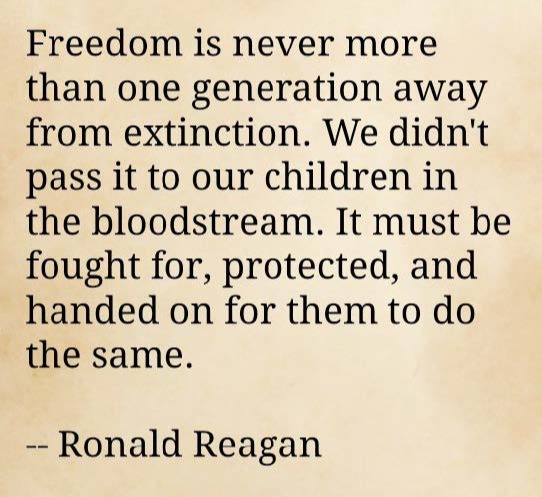 No matter our disagreements, the freedom we share and that has spread across the globe is worth protecting. It’s not perfect, it’s not always smooth, but it’s worth the fight. And in the words of Forest Gump, “That’s all I have to say about that.”

Ok, I’m not quite done talking about this.  Was taking over Ukraine going to be as simple as Crimea?  Perhaps Putin underestimated the people of Ukraine to fight for their freedoms and to not let a dictator take over their country without a fight.  I know I would feel the same way.  And so here we are, the markets are taking it on the chin so far this year, but all things considered, they are doing ok.

Prior to the Russian invasion, the markets were more concerned about rate hikes from the FED. We have discussed that many times in this blog, and we believe that the economy is already starting to soften and the FED is late to the game as far as raising rates (that likely should have been done last summer/fall). Now we worry about a policy mistake. Will the FED raise rates too far? We mentioned Bank of America believes the FED will raise rates seven times THIS YEAR! JP Morgan thinks the FED will raise rates 1/4 point (0.25%) each of the next 9 meetings!! WHAT? Just for the record, I want one of those jobs. It’s better than a meteorologist job.

We showed the 2-year treasury a few weeks ago and also showed the spread between the 2-year and 10-year treasuries. Let’s update that chart and see where we are today. You can see that the spread has continued to narrow, which is a sign the bond market thinks that inflation is not a longer-term problem and that the economy is likely to slow down. We’ve also pointed out that when the spread goes negative (2-year is higher than 10-year rates), that will typically forecast a recession. We’re not to that point yet, but if JP Morgan and Bank of America are right, we will get a doozy of a recession. Just to be clear, there is no way they will be correct (just my opinion). Put that in your planners to check back with me around the middle of next year to see if I was right.

I would definitely call that many rate increases a policy mistake, and for those of you that read this regularly, you know my opinion of FED decisions in the past. So, do I think it’s a possibility that they make a mistake? Absolutely!...even if they don’t get to seven or nine like the aforementioned forecasters are predicting. It’s too early to tell right now, as they haven’t even started (though Jerome Powell pretty much set the March path in stone today by declaring his support for a 0.25% increase).

So, rate hikes and geopolitical issues are the biggest things the market is wrestling with at the moment. Keep in mind that the market always worries about something. And bad news sells. 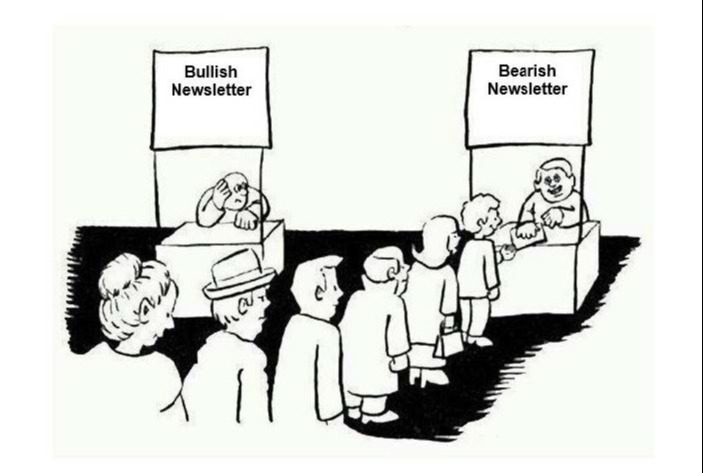 Being behavioral finance experts (I use that term loosely), we know that your financial plan is likely to fall apart not when the markets are doing well, but when they are pulling back and the next world-ending something is going to happen. See the chart below of reasons to sell over the last 10+ years. 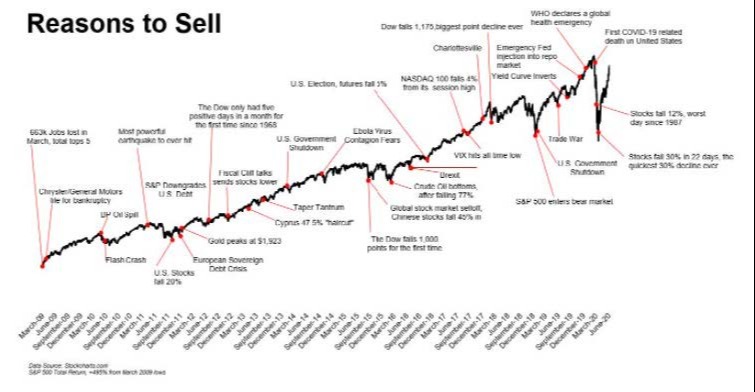 There’s always something scary going on in the world. We don’t believe that it’s prudent or wise to try to expect that we can miss all the downside and capture all the upside. It’s just not possible, so our job is to keep you invested while putting boundaries on the risk you take in pursuit of your goals. It was with that in mind that when we put our model together, we integrated a couple of absolutes into it. First that we have a long-term time horizon for investments. Our definition is generally at least 10 years. Many have time horizons well beyond 10 years. The second is that we can’t ‘time the market’ and therefore we will always be invested to one degree or another. Which brings me to my portfolio update. We mentioned a few weeks ago that our Alternative sleeve was making a run at the number one spot in our relative strength matrix. Well, it did that on February 17th. As always, we try to give thing to the end of the month to make sure we don’t get whipsawed by our indicators.

With Alternatives now firmly in the number one spot, we have begun overweighting that asset class relative to the others. Energy and commodities have floated to the top of that asset class. You know that we have been fans of a transition to cleaner energy, but with a realistic view that those technologies will take years and maybe a decade or more to transition and we see natural gas as a great transitionary, reliable source of energy while the world is making the transition to cleaner sources. We have had that position in the portfolio for several years and have done a lot of research in that space. Adding to that is other hard (gold, silver, other metals) and soft (agricultural) commodities that should benefit from higher inflation. We still have a good allocation to US stocks and are underweight international stocks and bonds. Like every major asset class, there are areas we like within each larger asset class. US stocks have drifted toward value stocks (low P/E, low P/B, etc) and certainly have an aspect of quality and balance sheet strength to them. When we look at fixed income, we are looking for the ’best house in a bad neighborhood.’ What I mean by that is owning long-term bonds in a rising rate environment will likely hurt investors. Thus, we prefer to have shorter maturities and floating interest rates that will change as rates move higher. At some point, those bonds will fall out of favor and the time to own them will have passed.

Keep in mind, our model was never designed to avoid what we call the wiggles. Those would be the 5%-10% corrections that should happen several times a year. See the chart below. Above the line would be “wiggles” to us and below that line would represent a larger pullback that would likely cause the model to adjust. Notice how many are above the line versus below the line. You can see why we consider those wiggles. 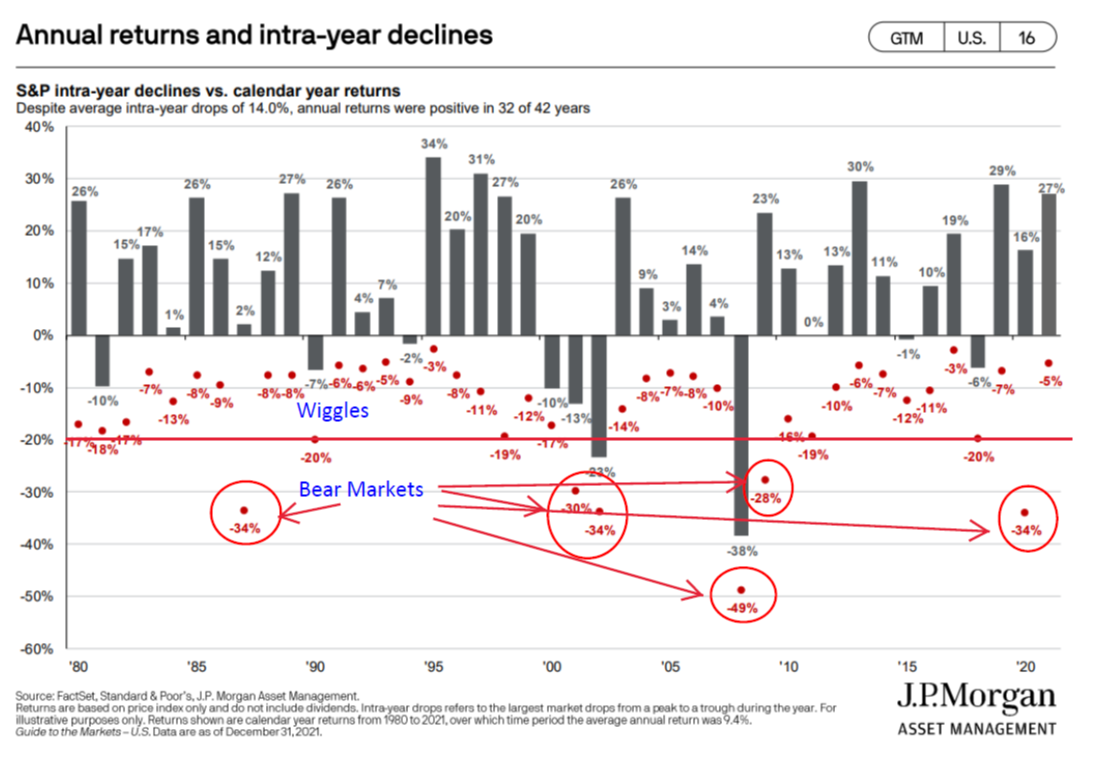 Historically speaking, alternatives don’t stay in the number one spot for too long, usually no more than a year. However, commodities have remained in the basement of investing for decades and maybe this will be a more durable investment over the next several years, as inflation stays above average.

Regardless, we will continue to run our relative strength matrix to see where money is best treated. I don’t see bonds as a broad asset class becoming compelling unless we can get rates to a normalized level. Given the ramifications of that, I don’t see that happening any time soon. For now, we must dig deeper into each asset class to find those areas that are attractive (good house) in the overall asset class (bad neighborhood).  Have a good week and please do reach out with questions, comments, or concerns.