We hope you all had a wonderful 4th of July! I certainly did, despite being unable to take my mind off the markets for any extended period of time. I wanted to take today’s update as a chance to explore a couple of major market topics that have been swirling in my head…and in speaking with many of you lately, I know at least this first topic is in yours as well.

One can’t help but wonder which market was/is correct. Was it the market that was pricing in the end of the world, where millions around the globe would die? Or is it today’s market that is ignoring record high new cases in the midst of a reopening around the country and world? Is it really somewhere in between? Perhaps, but maye it’s just a simple as $7 trillion pumped into the system, rendering the virus and declining corporate profits meaningless in the eyes of investors…hmm, so many choices.

The question I posed to Jeff and Andrew over the weekend was, what if the US government does another stimulus package (a really big, really “yuge” one) that would make the $2.3 trillion CARES Act look like chump change. Oh and let’s throw a $1 trillion infrastructure deal in there and the FED gets approval to buy stocks through the already set up Special Purpose Vehicle (SPV).

I mean, if $7 trillion is good, $10 trillion must be better. It’s not like the FED hasn’t already said there is “no limit” to how much money they can throw at the markets. Given the fact that new CV cases are surging in 75% of the country now, it seems like a good time take this game to the next level (oh, and did we mention there’s an election forthcoming in just four months?).

Related to all the money thrown at the economy so far, our good friends at Wisdom Tree showed us an interesting chart comparing Tech stocks in the late 90’s and a basket of oil and gas stocks. It made me reflect on where we’ve been and where we are. Perhaps I had a little too much 4th of July punch. 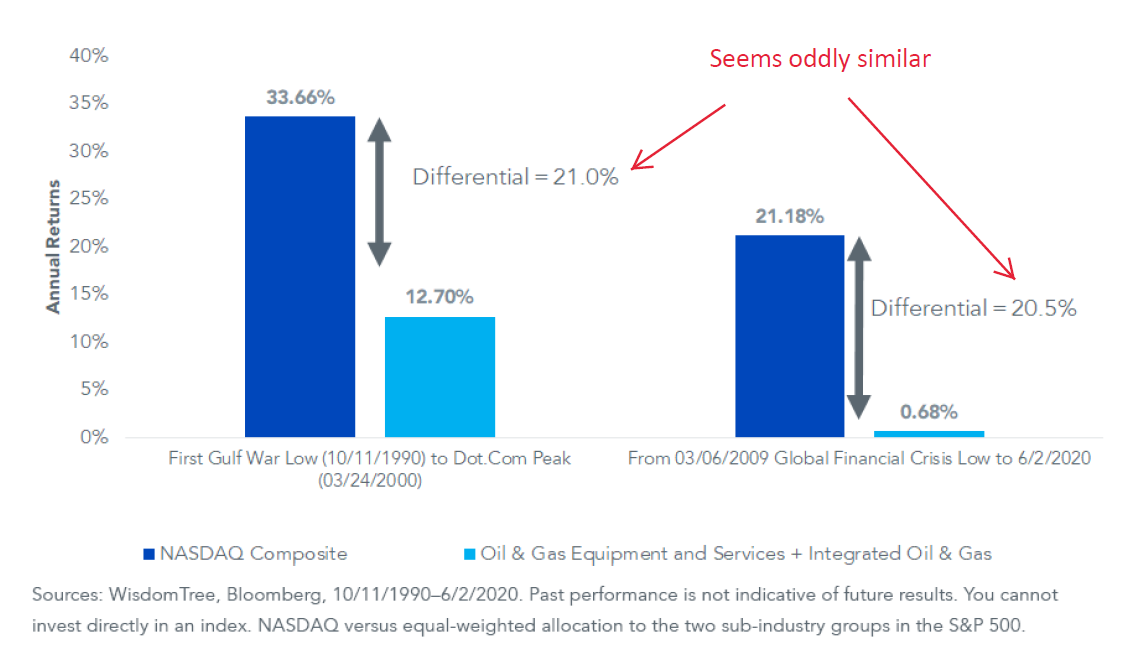 They also looked at the Tech sector as a percentage of the total market cap of the S&P 500 (the total value of all 505 companies in the index). Note that they did have to add back in those stocks that S&P moved to other sectors in late-2018.  Would you classify Facebook, Alphabet, Twitter and Snap as Communication, or Tech?  How about video game companies like Activision and Electronic Arts.  Ok, while my son plays Xbox, he does talk to his friends that are also playing the same game, but is that really Communication.  I’ll let you decide for yourselves. Regardless, the chart shows some eerie similarities to the now-infamous dot-com era. 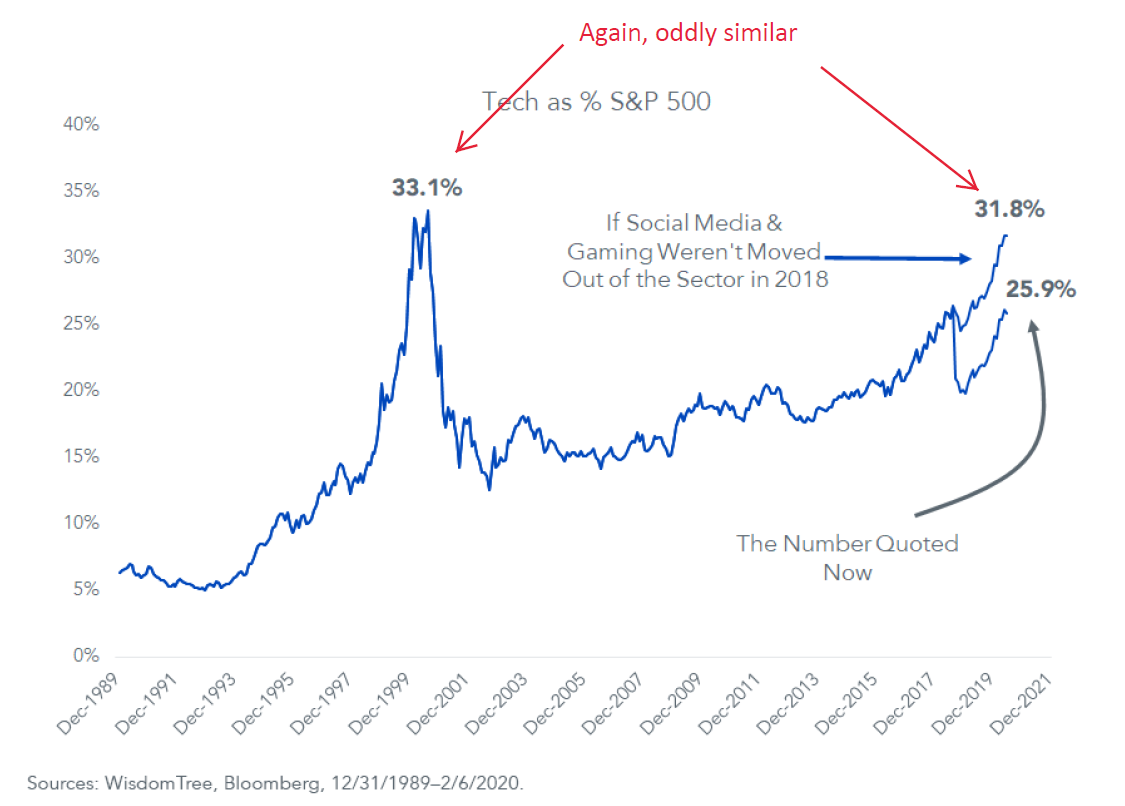 Finally, let’s look at what that “washed-up” investor Warren Buffet was up to over the holiday weekend. Rather than focusing on his favorite meal – a good old hamburger – he was busy putting some of his $137 billion cash pile to work (you’ll recall a piece from earlier this year where we highlighted his recent inaction due to what he saw as a lack of good opportunities). Well, he apparently found one over the weekend, spending nearly $10 billion to acquire the natural gas pipelines and storage assets of Dominion Resources. Why is that of note to me?

In a world that is going all electric, something will have to be a reliable source of energy for when the sun doesn’t shine and the wind isn’t blowing. I think a lot of people don’t think much about where that electricity comes from when you plug your Tesla into the wall. Over the last decade, we have seen a big rise in renewable energy production (a good thing) and we expect that trend to continue over the next several decades. However, we’re not there in yet in terms of being all-renewable, and in the interim we need to focus on converting coal-fired plants to cleaner gas-fired plants to help bridge the transition. While some might say it’s not good enough and we need to be 100% carbon neutral, it will likely be a while for that to come to fruition. In the meantime, natural gas emits 50%-60% less CO2 per million BTU. 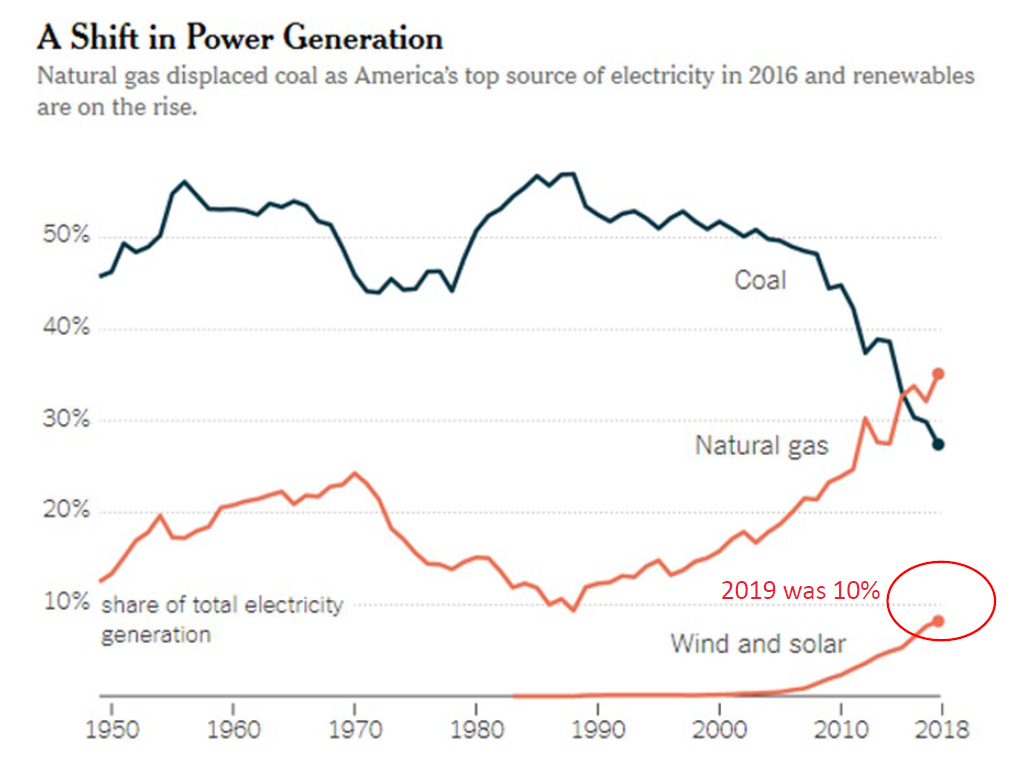 While China is currently the biggest contributor to greenhouse gas emissions, we believe that the conversion of their coal-fired plants to natural gas will dramatically improve global air quality and reduce the growth of greenhouse gases, while the transition to more renewables continues. Mr. Buffet seems to see opportunity there. Time will tell if he still has his magic touch. 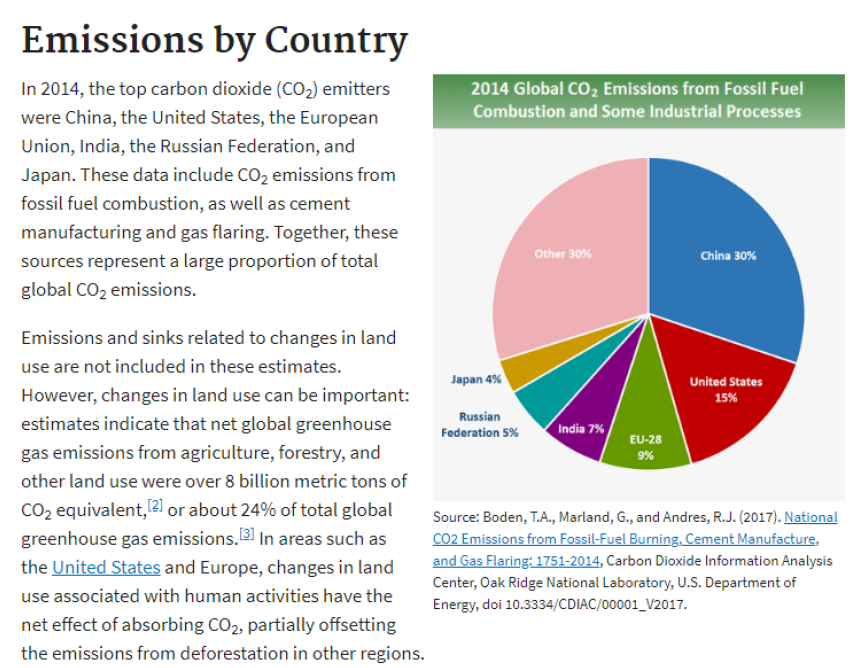 As always, we welcome your comments and questions. In the meantime, we’ll continue to test our assumptions, dig into our research, and lean into our model as we seek to be ever mindful of risk while pursuing long-term returns for your portfolio. Now that the 5th of July has passed, we can say “welcome to summer” here in Seattle. Now back to the punchbowl to celebrate.  Cheers.