Much ado about nothing

This week we’ll keep it short and sweet, quickly following-up on what we wrote last week. If you remember last week’s blog, we mentioned that it was a big week for corporate earnings (4 out 5 largest companies reporting) and some very big economic reports were due to come out. Throw on top of that the FED meeting and you potentially had the makings of some very big volatility.

And that’s what we got, just not in the direction that many small traders thought (remember, volatility works in both directions). Here is a quick chart of the ‘S&P 500 equal weight’ index. The crosshairs are where the portfolio model went “risk off.”

If you remember, we said that our trend model is a lagging indicator, meant to get us out of the market when the trend changes. That happened on June 16th. BUT, knowing the limitations, the market was very oversold at the time and most sentiment indicators were saying there should be a bounce in the markets (which we would then use as a place to reduce risk exposure, if appropriate). This prompted us to hold on for the time being. 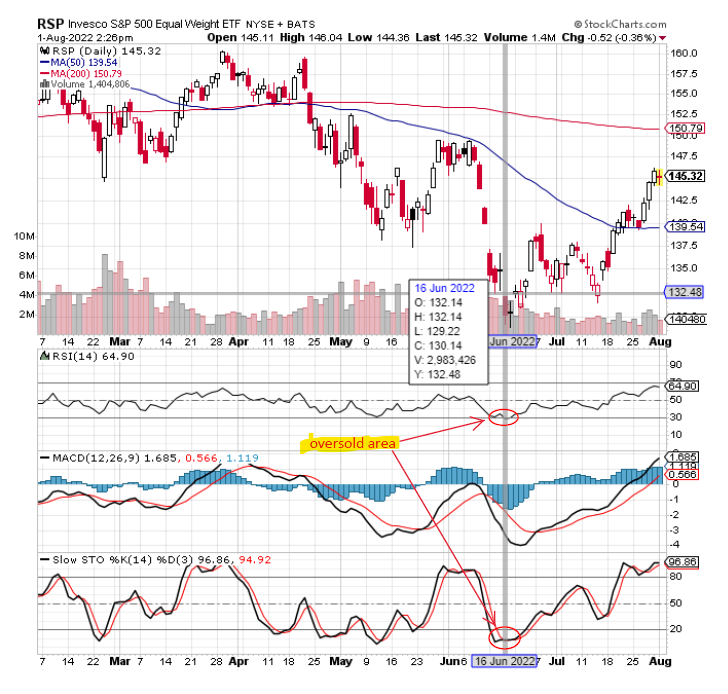 Again, I highlighted the spot where the trend model got conservative, but you can see that the market was oversold and due for a bounce. In addition, our money flow indicator was showing big divergences between price and money flow.

Here was the headline from that money flow data. 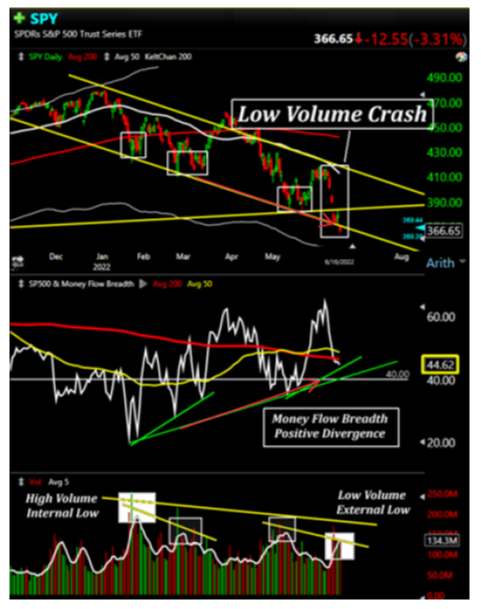 That headline redefines “confusing market speak” (apologies), so I’ll translate. When the market goes down and the money flow goes up, that is the divergence we are looking for – and one we found. It can also work in the opposite direction too.

Last week most of the economic data was worse than expected. Consumer sentiment is as low as it’s been over the last 50 years (see the chart below). 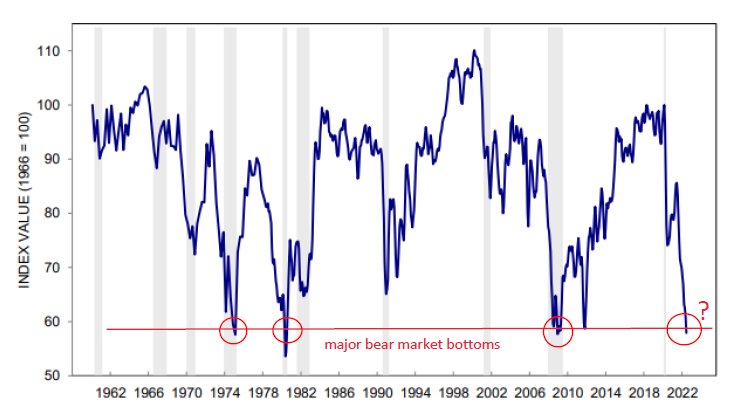 Earnings for Microsoft, Amazon, Apple, and Alphabet (Google) were generally better than initially feared and moved the market higher based on those better than feared numbers.

As we look forward, money flow has turned positive (for now) and markets are moving higher to the 200 day moving average (see RSP chart above).

Like we’ve been saying for a while, if this is a shallow (technical recession), we would expect the market to be mostly finished with its selloff, and we should see the market start to move up, as it discounts 6-9 months into the future. If that’s the case, we are now in a recession and 6-9 months from now we will be in a recovery and the economy will be showing better data.

If, however, we are at the beginning of this recession, we would expect this rally to be within the context of a larger bear market, with the 200-day moving average a reasonable area to rally to. Once there, we’ll likely see the markets sell off and make new lows later in the year.

We don’t have a crystal ball, but we look at as much data as we can to make informed decisions. For now, we expect the rally to continue. Stay tuned.

We do hope the rally continues but are thankful the persistent heat is not following suit! We hope you enjoy this week’s slightly cooler temps as we move into August. The Blue Angels will be roaring overhead before you know it and back-to-school shopping will be in full force before too long…which also means Andrew’s oldest will be walking to Kindergarten in a matter of weeks. Crazy. Whether you want to talk about the weather, Seafair, school, or dig into the weeds of the markets, please don’t hesitate to reach out. We’re happy to chat! Otherwise, have a great week!