It appears we have our first naked swimmer. What? Yep, don’t look.

Ok, you may not know what I’m exactly referring to. Let me give you some background and set the stage.

Everybody knows of “bitcoin,” but few really understand what it is. I’ll admit, I’m no expert, but I did stay at a Holiday Inn Express last night (click here if those memorable commercials are ringing a bell).

Bitcoin was the first “decentralized” cryptocurrency, developed in 2008, coming out of the Great Financial Crisis. Decentralized, meaning that no one government or person controls it. Let’s back up even further to discuss “money.”

Money is the medium of exchange (sort of a ledger) for everyone’s cumulative efforts. The more money you have, the more “effort” or contribution to your work, profession, or the world you have done (theoretically). Prior to currencies being developed, people would barter their goods or services for something they wanted or needed. The problem with bartering is that you may exchange things of vastly different values. For instance, you may need an ox to pull your plow, but your good may be something much smaller and of less value, let’s say a haircut. You would have to trade a lot of haircuts for one ox. How does one account for that?

Well, back in the day, they would use sticks with notches in them.  They were called ‘Tally sticks.’ 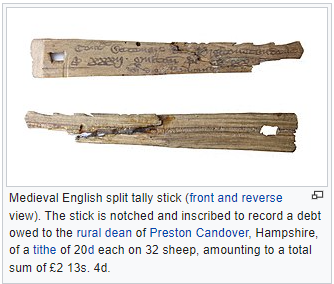 That was one of the first methods of accounting. Of course, these sticks could get bulky, and they are obviously limited in the number of transactions they can record. So, imagine carrying many of these sticks around with you when you want to buy something. Then coins were later minted in different values as an easier form of exchange. Most of these coins were either gold or silver, which is why we still have gold and silver coins minted today. But those could get heavy if you carried enough of them.

Paper currency was first developed in China in the 7th century. By the 10th century, the Song government in China issued the first government backed note. That note was a promise to pay (backed by the taxing authority of the government). That is the basis of today’s currency. But historically, governments would back their printed currency with gold. This is called the ‘gold standard.’ You may have heard of that, or even lived in a time where it was still a reality here in the USA. All it means is that there was something backing printed money.

In the aftermath of the Great Depression, a new standard rose from the Bretton Woods agreement. Instead of requiring conversion of currency into gold, currency would be convertible into US dollars.   That was the start of the Federal Reserve inflating away the US dollar. In 1971, President Nixon removed the US completely from the gold standard and allowed our currency to fluctuate. The birth of true fiat currency was here. It allowed the Federal Reserve and the US Treasury to print money and issue IOUs as needed.

Now, fast forward to the Great Financial Crisis. At that time, there were starting to be runs on the banks (think Washington Mutual) and the governments across the globe had to intervene to stabilize the system. And as we just saw in 2020 during the pandemic, if a little bit of money printing is good, a lot of money printing must be better, right? I’ve shown this chart before, but now there is some context as to what it means.

You can see money on the FED’s balance sheet during the GFC more than doubled and then doubled again over the next 5 years. Just as the FED was starting to reduce its balance sheet in 2019, COVID came, and they reversed course and doubled their balance sheet again. Many will argue this is the reason inflation is a problem today.

This chart is the exact reason that bitcoin was invented. The lack of trust of centralized governments basically confiscating wealth through inflation.

So back to where we were. Bitcoin is a decentralized cryptocurrency. Crypto, short for cryptographic, is a way to secure the network and transactions, and currency, which is just a medium of exchange. The cryptography is based in what is called a blockchain (see graphic below). Each block is verified as to its authenticity and is then permanently approved as part of the chain. Every transaction is public for each user to see.

Now this is where you lose me a bit, because I don’t know how to “see” the blockchain or where to find a transaction. What I can tell you is somewhere on that blockchain, I have a record of my ownership of bitcoin. That proves that I own it. Sort of like your checking account balance held by your bank. But in that case, the bank is acting as a financial intermediary. A ‘trusted’ third party, much like credit card companies are.

Which brings us to the next point.  The difference between centralized and decentralized. Centralized is one entity controlling the currency, like a central government bank (Bank of Japan, Bank of Canada, US Treasury). They all possess the ability to create money or act as a trusted intermediary. And boy do they use that privilege. Decentralized is where no one entity has the ability to control a market and the majority of the network validates each transaction. Essentially the trust is built into the system.

It’s the difference between Visa saying you have enough credit to buy a television versus everyone in your network that knows how much money you have, saying that yes, you have enough money to buy the TV.

You may say that you don’t want everyone to know how much money you have. Perfectly reasonable! This is why there aren’t names associated with the accounts. Just an account number or keys.

Ok, so enough explaining what cryptocurrencies and blockchain are, let’s get to the good part. Over the years, we have had many people ask about buying cryptos. Mostly when they were at all-time highs, and they were the new fad. Today, nobody asks about them, except in negative ways. But that’s what I want to clear up.

There have been several collapses, frauds, Ponzi schemes, call it what you want in the crypto space. Every one of them have been of the centralized variety. Here are comments from Cathie Wood of ARK funds: 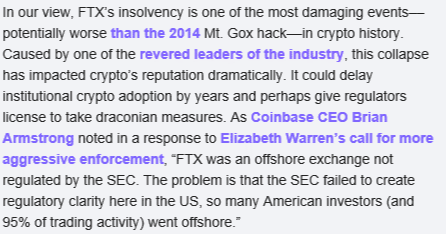 As well as differentiating between centralized and decentralized. 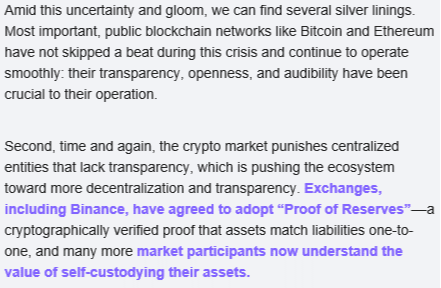 Decentralized, transparent and open are the qualities of blockchains I think will thrive in the years and decades to come as blockchain and DeFi (decentralized finance) are integrated into many existing parts of our current lives.

In case you don’t know what FTX is, check out this CNN article. Am I the only one amused by the interview of the founder of FTX about Ponzi schemes? He happens to be the one now in bankruptcy and under criminal investigation. Is that the definition of irony?

Just for your amusement, nothing like celebrities lending credibility to your company.  How did that work out? 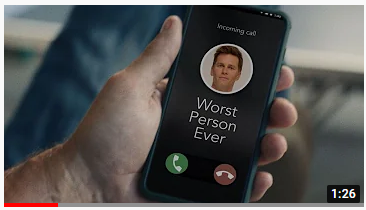 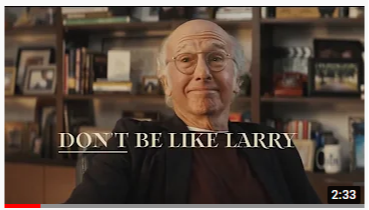 Maybe this is why Tom Brady is still working.

So finally, to wrap this up, let’s go back to my opening line. You know one of my favorite Warren Buffet quotes is, “You never know who’s swimming naked until the tide goes out.” Well, we’ve been talking about the tide going out for the better part of this year and guess who was playing in the shallow end – FTX founder and (former) CEO, Sam Bankman-Fried (affectionately known as SBF)!  Look away.