Jerome Powell vs. The Global Economy 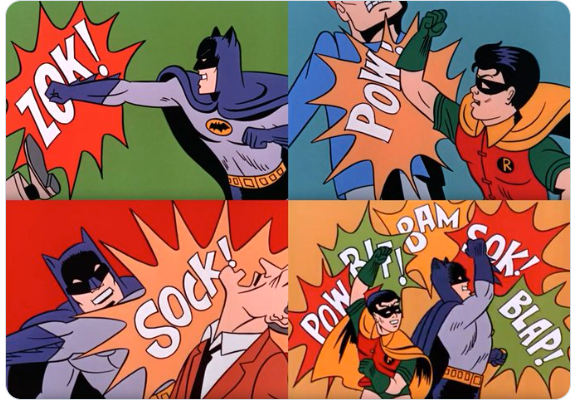 At about the same time many of you were waking up on Friday morning, Fed Chair Powell woke the markets up in a big way with a very ‘hawkish’ speech from Jackson Hole in which he tried to put to rest any notion that the Fed will soon pivot away from their efforts to fight inflation.

After years of holding interest rates at 0%, they are now talking of holding them higher for longer. I would argue they held them too low for too long, and now they risk that on the other side. The market seemed to agree with this assessment, as it sold off aggressively following his speech and has continued its downward move since then, giving back many of the gains that came following his last speech in July.

We’ve talked about them driving the ‘economic’ car into the ditch, from side to side.  Well, brace for impact. Let’s start off with what was actually said. It was only an 8-minute speech, but the speech will likely reverberate for much longer.

That’s the headline, let’s look at the specifics. 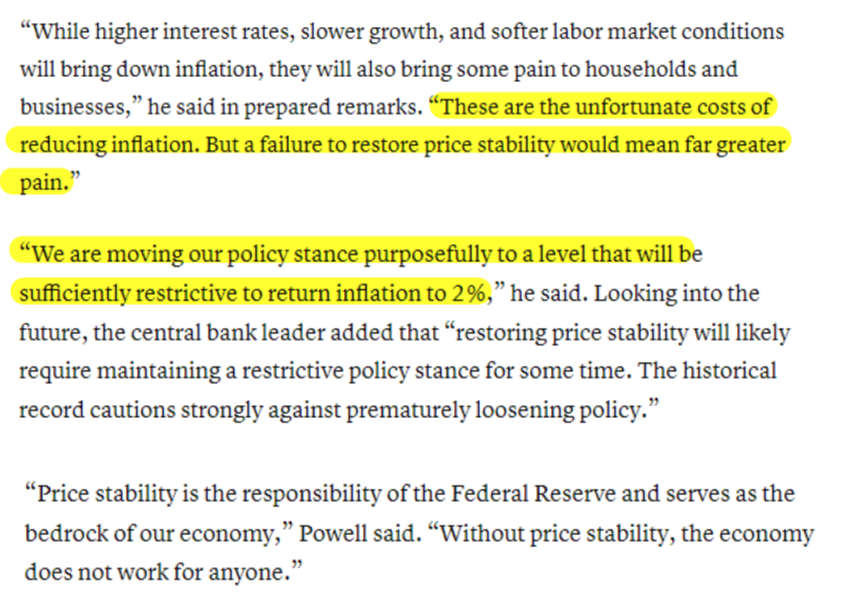 So, after keeping interest rates at ZERO, now they are going to keep rates higher for longer and that may cause “some pain.” As one economist recently analogized, both fiscal (Congress) and monetary (Fed) policy acted as morphine to the pain of COVID and the shutdowns, and at some point, that morphine has to wear off, leaving us in a bit of pain. In other words, we’ve been masking some underlying pain for quite some time (too long in my opinion) and now we’re going to feel it, and feel in acutely, if the Fed sticks to their guns. Will they stick to their guns? The well-respected Mohamed El-Erian, chief economic adviser to Allianz/PIMCO, seems to think so:

Deal with the errors? No, we’re just going to pretend those errors never happened. Move along, nothing to see here.

And to show you how determined those in charge are to see things through, despite the pain they may cause, here is a headline from Neel Kashkari, the President of the Minneapolis Federal Reserve.

Happy? Really? Seems a bit out of touch to me, especially when we’re talking about the financial lives of real people who rely on their 401(k) in a very real way. Should the Fed be managing to the markets? No! But should they be “happy” when real money is erased from the balance sheets of real Americans? It’s a rhetorical question. And this is just the markets we’re talking about here. The “pain” referenced earlier is also going to extend to the labor markets, meaning lost jobs and lower wages. There are real consequences to the decisions that are being considered here. If you’ve been reading this blog for any length of time, you know I would rather see less intervention from the powers-that-be. What they are trying to accomplish is just too difficult to get just right, and thus the errors on both sides of the equation (the cars/ditches analogy).

But I don’t get to call the shots. The Fed remains in charge, and the markets are left to react. I think this market will remain under pressure until three things happen (Hint, they’re all related)…

Let’s look at two of these, because they are also linked to the FED raising rates. Now, in full transparency, I DON’T know when the FED will suddenly change their mind. I hope it’s before they fully drive the car into the ditch, but based on the above quotes, I don’t think that will happen. 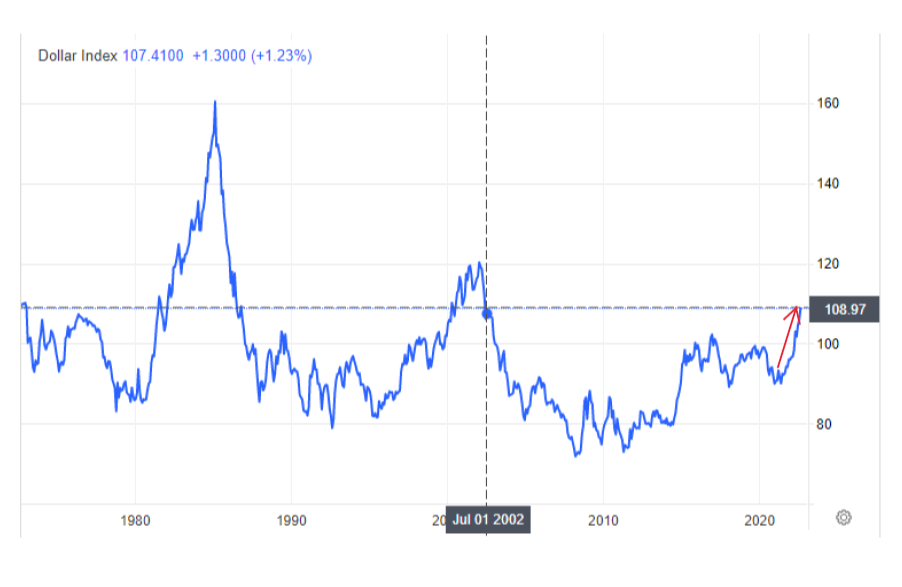 You can see that the dollar is at highs not seen for 20 years. You can see the spike in the 80s. Guess what was going on then? Yep, inflation and rising interest rates. Are we going to replay that? We’ll see.

As you can see above, short-term rates are higher than long-term rates. That typically says a recession is coming (note the gray shaded areas) (click on the image for a larger view, if needed).

Why are these two related to the FED raising rates? Because as interest rates in the US go up (relative to the rest of the world), money flows in from other countries to the US and is used to buy assets denominated in US dollars. That pushes up the demand for dollars (and that chart is pretty typical). Also, when money flows in, it typically finds a home on the short end of the curve because rising rates almost always cause a recession. So, money sits in short-term treasuries that yield more than both long-term rates and rates that money could get in their home country.

Here is a chart of major central bank interest rates around the world.  You can see in the highlighted rows where most of the developed countries are. 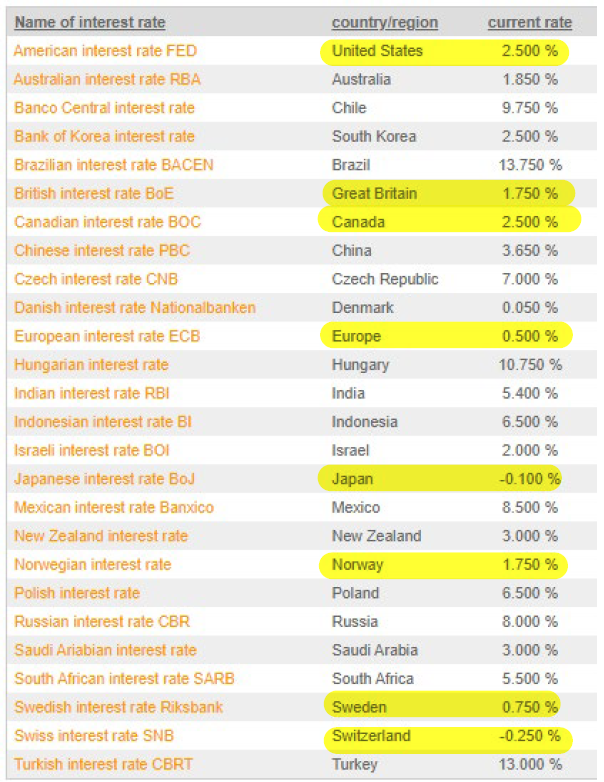 So, if you were an investor or central bank looking to get a better safe return, where would you put your money?

Trust me, I don’t want to be the Debbie-downer all the time, but I feel like I owe it to you to tell it how I see it. I get it, not everyone will agree with me. We certainly debate all of this internally. This is tough stuff, and the times we’re in are largely unprecedented. We’re learning as we go, devouring research from every angle in a pursuit to understand it all and act with the weight of the evidence on our side. There will be a time, hopefully sooner rather than later, where the answer is again “easy.” Until then, buckle up and proceed with caution. If Powell’s speech on Friday is any indicator, the road will remain bumpy for some time.

Have a good week.  Let us know if you have any questions about the market or larger planning issues.