Fast-forward and now there is talk about when the tapering will start and a possible announcement at the Jackson Hole FED policy symposium. Everybody who’s anybody will be there, but sadly our invite was conveniently lost…AGAIN! So, we are forced to consume the media’s version of what happened in the meeting. We should note that tapering (reducing purchases of bonds) and raising rates are two different things, but it is widely accepted that tapering must come first, so it potentially provides a useful signal to when the Fed Funds rate might start climbing.

As we’ve said before, we think the “party” will continue until the FED puts an end to it. You can see below, that the CAPE-Shiller PE ratio is not quite at 2000 levels, but clearly very elevated relative to norms.  The spike in 2009 was from the massive write-offs from the banks that skewed the overall earnings of the market.

FED chair Jerome Powell has been telling us that inflation is transitory and will likely peak, so there is no need to be alarmed. Below is the inflation chart for the last year. You can clearly see inflation rising substantially, but has it peaked and started to slowly normalize? Admittedly our crystal ball is no help, as usual. One could certainly say the second derivative is slowing, and that’s a good thing. 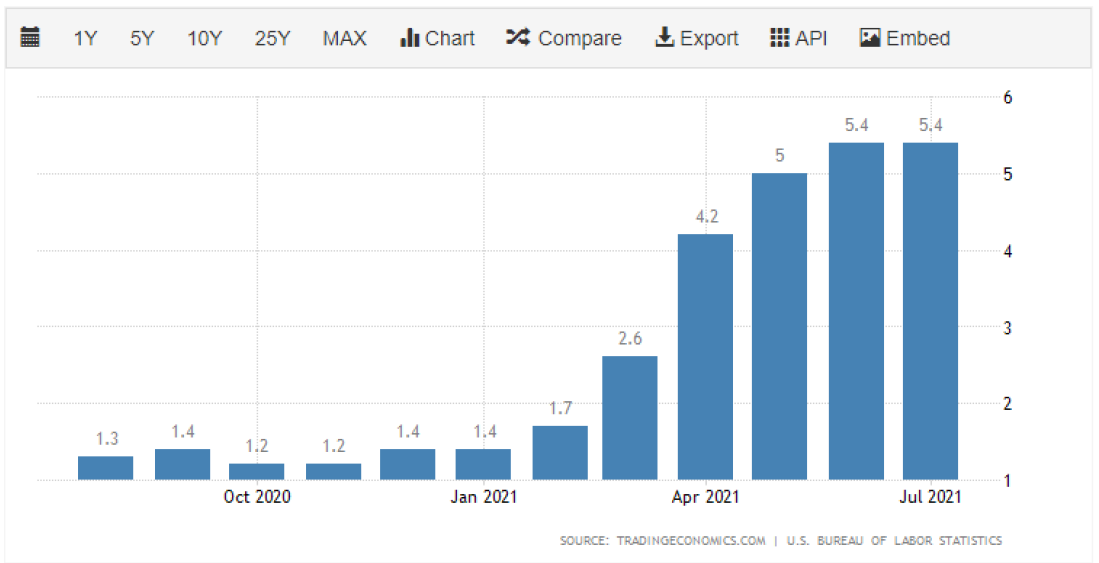 So, if inflation really is transitory, why is the FED acting a little more concerned? Is it possible they are already behind the curve? As you know, we talk about the FED driving the car from one ditch to the next. First leaving rates too low, then raising them too much, which causes them to cut rates too low again. Andrew says we should insert a video of his son driving the race cars at Disney World as an apt illustration. Let’s remind you of the dual mandate the FED has:

I think we can say that much of number one above has been satisfied. Ok, granted, there is still 5.4% unemployment rate and a U-6 rate of 9.6%, but there are 10% more job openings than there are people to fill them (see below). The inability to fill those jobs primarily comes down to training. In many cases, the economy is looking for people with certain skills, and there are not enough of those trained people to fill the jobs. Rather than giving people money to stay home, maybe that same money could be used to train people for the jobs that are available. There I go again, talking gibberish. 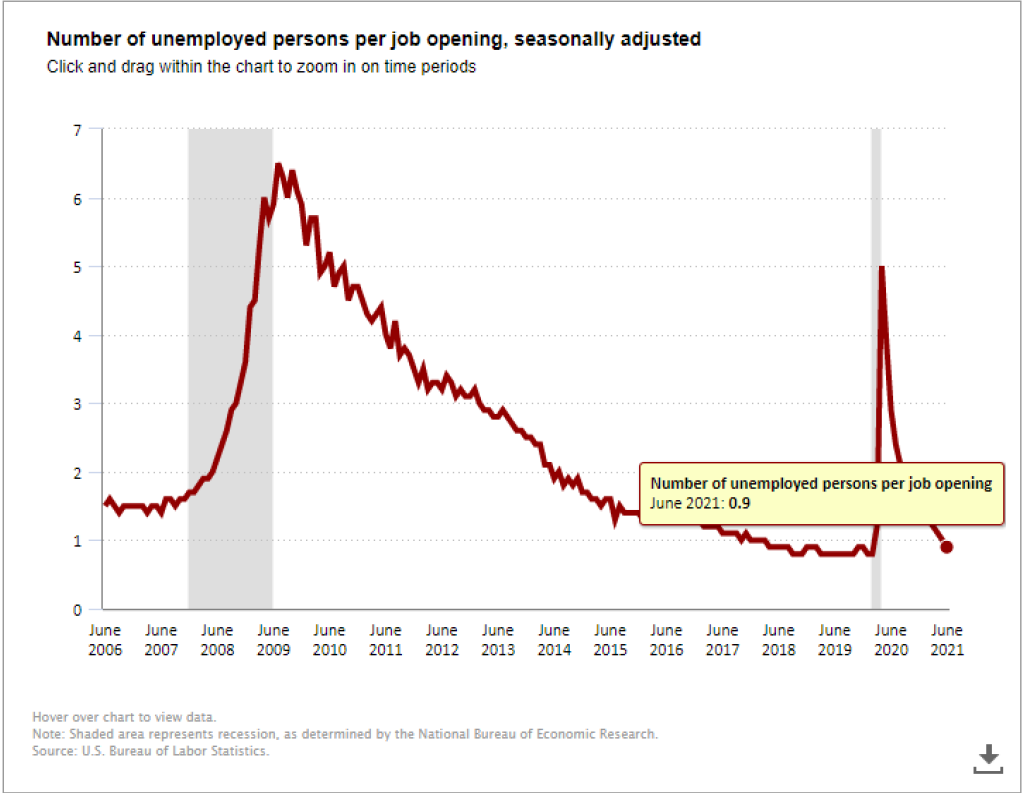 As far as #2 above, we went from worrying about deflation to creating inflation in record time. Who says we can’t all have a good time when the FED brings the booze? So, if the FED was worried about deflation (during the COVID shutdown), the unprecedented amount of stimulus has clearly wiped out any fear of deflation and now we have a different problem (remember, driving the car from one ditch to the next).

The FED is now stuck in a position of its own making. Do they let the economy run “hot” and risk turning transitory inflation into something like runaway inflation, or do they start to take some liquidity out of the system and allow things to normalize? Let’s see, two choices – bad and worse. Alex (or I guess now, Mike or Mayim), I’ll take bad choices for $200 please. Just for fun, below is what happens when we go all in on Final Jeopardy when the topic is “Bad FED policies during COVID”. 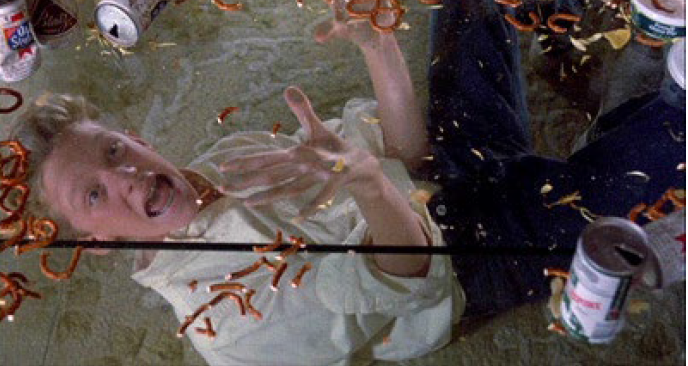 Getting back to the all-important wager that Jeff and I have. It’s likely that the FED will start to “taper” their bond purchases in the near future, with interest raises coming next year. Still too early to tell who will be right, but the bigger question is how will the economy and the markets hold up without easy money? Well fortunately (or unfortunately), the geniuses in DC think that this is a good time to throw economic fuel onto the fire with a $3.5T “infrastructure” bill, on top of the $1T that passed the Senate last week. I just have one question. Who is going to do all this work? We are already short of people and unless we want this bill to span decades (which dilutes the effects), we need to find people that are ready, willing and able to perform the tasks those jobs require. Next up, immigration reform…

Finally, last week we celebrated the 42nd anniversary of the now infamous “The Death of Equities” article. Inflation was running amuck and how in the world would stocks survive? If you would like to read the article, here is the link. 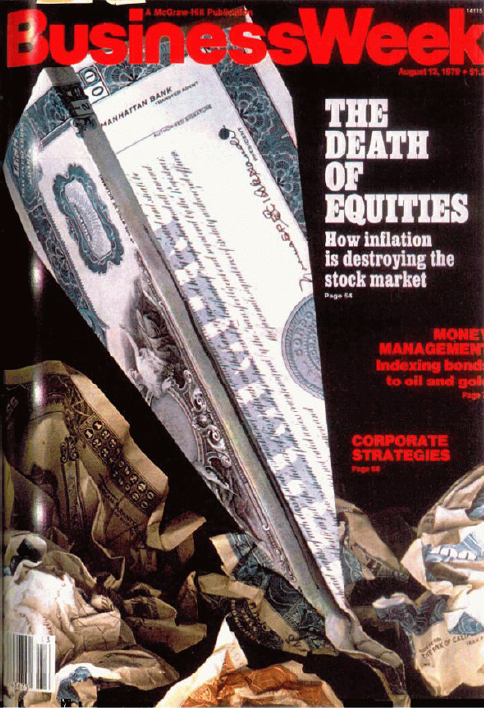 Below is the chart of the S&P 500 going back to the late 1920s.  The circle is where the BusinessWeek headline came out and I would say (in general) that equities not only didn’t perish, but they thrived in the four decades since. That’s not to say that we haven’t seen bad market periods, but stocks are one of the best ways to beat inflation over the long run. 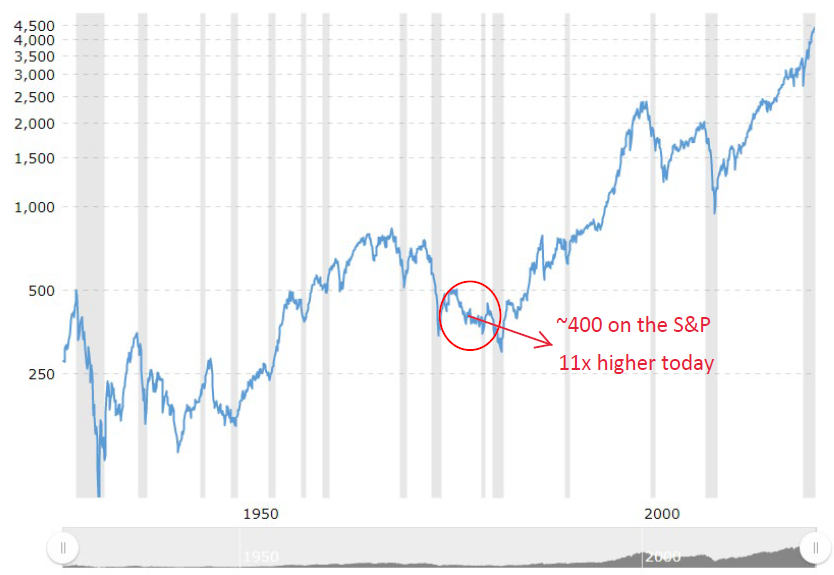 So, while we certainly have our challenges in the economy, the health front, valuations in the market, and a “new” geopolitical issue in the Middle East, we still remain very bullish over the long-term for innovation and wealth builders. We see challenges like global warming and cancer being solved by innovative entrepreneurs, and while it may not be as fast as we would like it, we believe some of the world’s worst problems will be solved in time.

Have a great week.