Is this a case of the Mondays?

A week ago, it was a fear of inflation. Now it’s fear of deflation and another lockdown. The “reopening” stocks are getting clobbered, and money is flowing into “safe” assets like Treasuries. We talked about this a couple weeks ago. Oddly enough, as much of the U.S. was reopening and many of us had or were in the process of getting vaccinated, the 10-year treasury yield was peaking and starting to turn down (with bonds lower yields = higher prices, usually driven by increased demand). 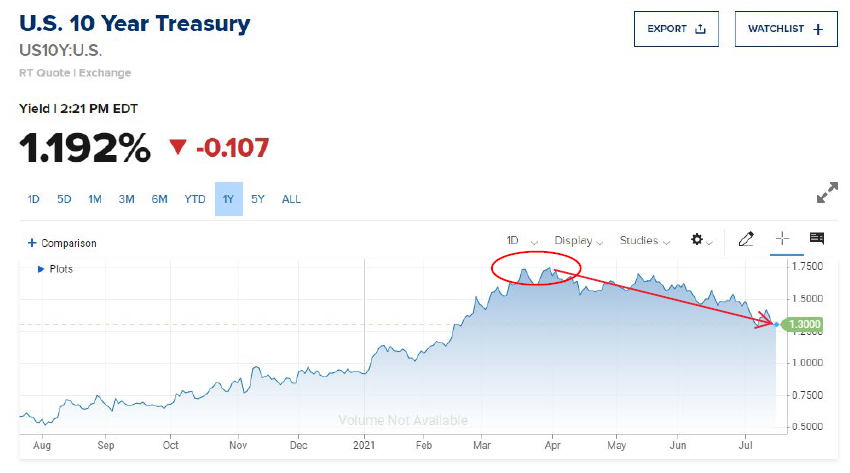 That seems to be picking up steam as we head into late summer and fall.

We have said in the past that we didn’t see inflation as a long-term issue, but that it might be elevated for a shorter period of time. How long? Nobody really knows, but might last for months to a few years, in our opinion. Why will it not be a long-term issue? Let’s look at some data points. The first is the velocity of money (how much the same dollar is spent in the economy). You can see that it peaked in the late 90s and seems to accelerate to the downside every time the FED injects more money into the system.

Different scale, but you can see when the FED floods the economy with cash, the velocity goes down proportionally.  So why does that matter?

Keeping things at a high level, the [amount of money in the system] x [the velocity] = Nominal GDP. I guess that kind of makes sense. It would also explain why it has been so hard for inflation to materialize over the last 20+ years. As more money is put into the economy, the velocity has slowed (basically counteracting the increase in money). Here’s the results of that effort.

It’s been very difficult for the economy to grow at much more than 2% per year. We would expect that the GDP spike on the right-hand side above, will likely start working its way back down closer to normal. That is assuming no other exogenous shocks hit the world.

So, for now, the markets have a case of the Mondays with the S&P 500 down almost 2% today.

That’s enough for this week.  I will be in Iowa next week, bicycling across the state in one of the largest and oldest bike rides in the country (me and thousands of my closest new friends). Staying in luxury tents (NOT!) in major cities like Fort Dodge and Waterloo, Iowa. All kidding aside, RAGBRAI (as it’s called) didn’t happen last year because of COVID, so many of these towns are looking forward to the economic impact of thousands of people converging on their towns, even if those thousands are donning spandex. The start is in Le Mars, which is the self-proclaimed “ice cream capital of the world.” Wish me luck.

Let’s hope the market gets its legs under it for the rest of the week.  Have a great week.