Is the FED between a Rock and a Hard Place?

We hope you had a great Independence Day. Whatever your opinions of the state of the union, I hope we’ll all agree we are fortunate to call the USA our home.

We’ll keep today’s post relatively brief. Yes, we’re back talking about the FED, inflation, and interest rates again. I wish there was more to talk about as it relates to the economy and markets, but the reality is that these three (interrelated) items are the 800-lb gorilla that will determine the trajectory of nearly everything in that economy and those markets. Ultimately, profits drive stock prices – but those profits are highly dependent on the aforementioned three-headed monster, and that monster isn’t exactly dormant in his cave right now. So, here we go…

After raising short-term interest rates by 1.5% over the last few months, the Federal Reserve finds themselves between a rock and a hard place. The rock is the strong economy. The hard place is inflation. How do you slow inflation without slowing the economy at the same time? I guess we could also call that a Catch 22.

What they hope is for inflation to come down before they have to crush the economy. That’s also known as a ‘soft landing.’ Will that happen? Your guess is as good as mine. The rest of this piece will look at some of the factors I’m considering as I make my guess, and perhaps will help you form your own opinion here.

Keep in mind that inflation is only reported after the fact. It is a lagging indicator and isn’t helpful if all we look at is headline numbers. If we look at the components of the LEI, we can see that many of them have either already rolled over or are close to it. Below is a chart of the year-over-year change in LEI and GDP. 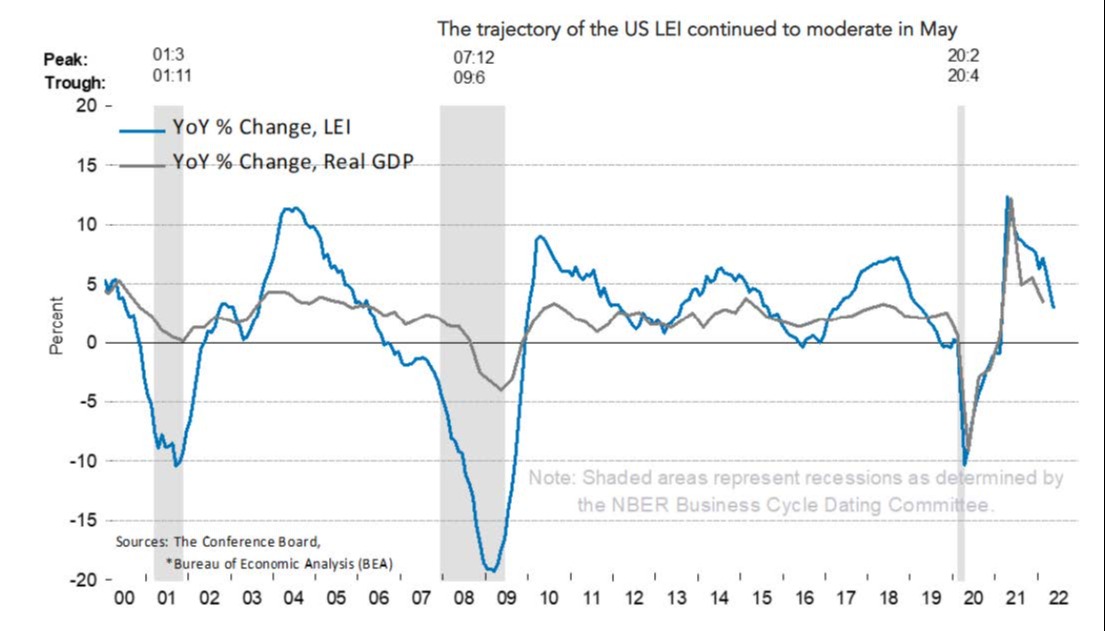 You can see that we have seen the peak in both indices and that they are now pointing to significant slowing in the economy.

In the FED minutes just released today, the committee had this to say.

The next FED meeting is July 27. By then we will have our CPI reading for June. We have seen a broad pullback in commodities, which should lend some softness for that reading. We are still seeing supply chain issues that are continuing to keep prices on the higher end (that will keep CPI elevated until the demand reduces further). If we see a peak in inflation, which I think we will, that should lend support for the FED to slow their interest rate hikes soon. Here is another comment from the FED.

I think the question that must be answered is, “What does the FED do after the July meeting?”

Let’s look at another great indicator that shows stress in the system. That’s the high yield spread over Treasuries (the difference in yield on a high-yield bond and a US Treasury bond). When spreads widen, that typically shows signs of stress in lenders. Tighter spreads typically indicate health in the economy, as yields on high-yield bonds fall when investors are confident that they will get paid back. Presently, you can see that spreads have blown out to 6%. Not at historically high levels, but certainly elevated.

Is there more to go? I would think so, but we will see.

Meanwhile, the trade weighted dollar is trading at highs, which puts inflationary pressures on foreign economies, while making imported goods cheaper in the US. Will that cause something to break if foreign governments owe debt denominated in US dollars? We shall see. 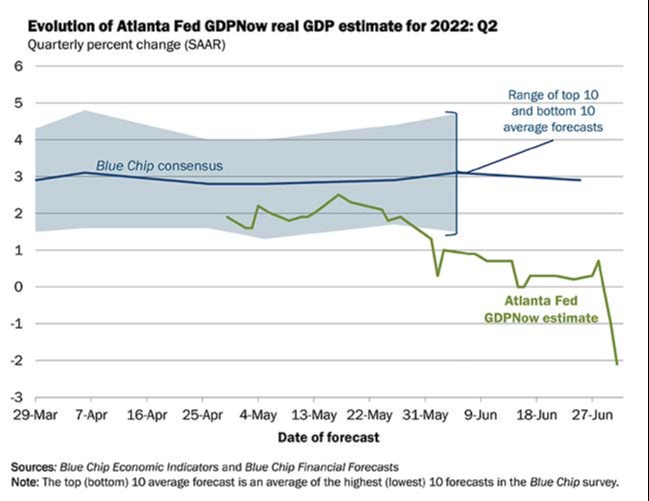 So, the FED said that if inflation is still growing and is a problem (versus peaking and coming down), they will have a more ‘restrictive policy’ in the coming months. Let’s hope that the peak is here and coming down by the time July 27 comes so that the FED can say that their hard work is done and that they will be less restrictive for the rest of the year. That might be your proverbial ‘soft landing’ if something like that happens. Again, we will see.

I’ll finish by reminding us all that the markets are forward-looking, typically 6-9 months into the future. Markets peaked at the turn of the year but were starting to show weakness in some areas a couple months prior. In other words, the markets have sniffed out much of what we’re seeing play out in the economy and have priced in these factors already. That’s not to say the bottom has been found, as the markets will continue to hunt for clues as to what’s next for the economy, but it is to say that the start of a recession (whenever that is) is not the start of stock prices deteriorating. In fact, it’s often the start of those prices appreciating. We’ll continue to be diligent in working to protect capital while maintaining an eye to the long-term and your financial plan.

That’s it for now. Have a good week and please do reach out with questions, comments, or concerns.