Is the Doctor in?

I would like to walk through some inflation indicators that we keep an eye on. Some of these you’ve may have seen before and others may have slipped past you (we hope you have more to concern yourself with than inflation data!). Let’s start with an oldie but goodie. The 5yr/5yr-forward chart. You can see that the expected inflation rate five (5) years from now is over 2%. Great news if you’re the FED, as you recently stated you are okay with that as your target.

But wait, there’s more. If you really want to get into the cost of things, lumber is one of the best forward-looking commodity inflation indicators. One of the reasons for that is it takes a long time to grow trees. Trees can’t just be manufactured on the spot, so there is an aspect of limited supply. You can see from the chart below that lumber prices have hit an all-time high and appear to be headed higher. That is reflected in the price of remodels and new houses. If anybody has tried to do a remodel/addition (I have), 2x4 lumber is 3-4x what it used to be. The prices of OSB and plywood are at nose-bleed levels as well.

But, if you really want to get a good overall view of commodity prices, all you have to do is look at the good doctor…Dr. Copper that is. Not a medical doc, but instead the metal “with a PhD in economics.” It is one of the most used metals in all kinds of construction and industrial production. Generally, when copper is moving higher, that indicates that the economy is improving and production is increasing. Since it is also a key component of many goods, it also says that inflation is coming. Well, guess what?  Inflation is coming. 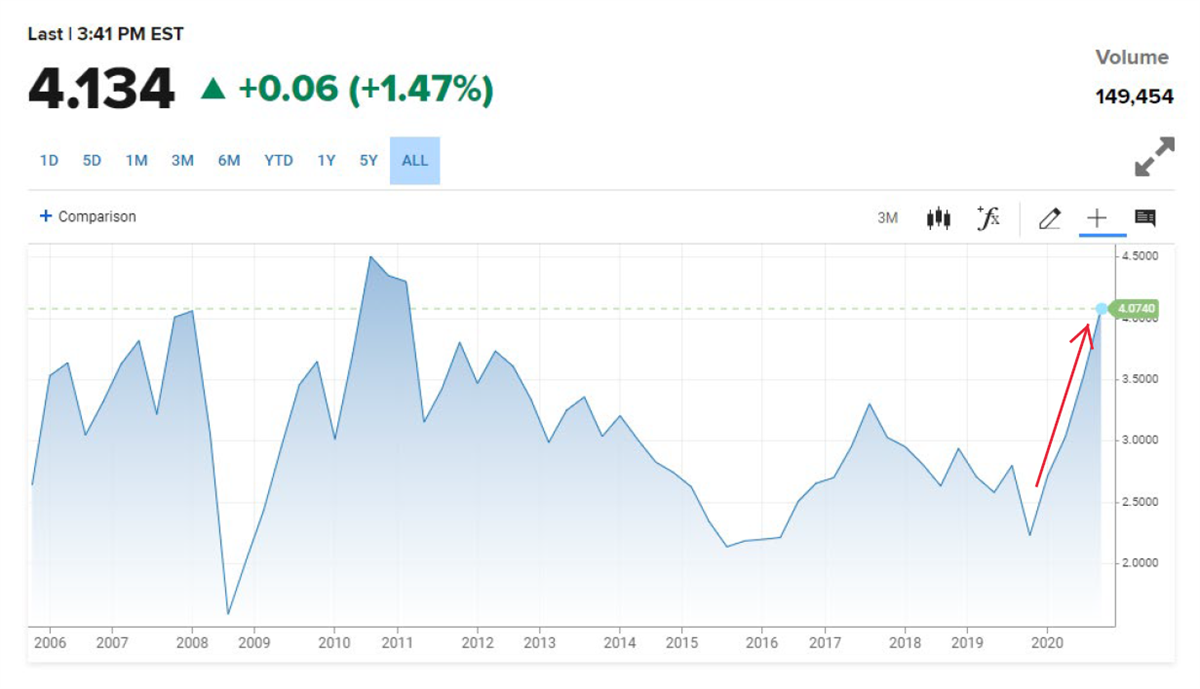 You will also see inflation priced into the value of the dollar. As the chart below shows, you can see the dollar has been sliding for the past year. Much of that is due to the printing of so much money through stimulus and FED intervention.

Here is the chart of the FED balance sheet and what has happened since 2008.

Now keep in mind, that this is all “made up” money, created out of thin air from the (digital) printing presses in Washington, D.C. If you believe in MMT (Modern Monetary Theory) and the tooth fairy, everything is fine and it doesn’t matter how much money you print. If, however, you believe as I do, you think that there are only two ways to get rid of the debt. The first is paying it off. Yeah right! The second is to devalue the dollar. As a nation, we promised to pay back the money we borrow. We just never said what that money would buy.

All I can say to this is, good luck getting somebody to give you money the next time you come asking. I know I’m being alarmist and old-fashioned but take a look at the Weimar Republic inflation after WW1.

Let’s be clear. I don’t think we’re heading the way of Weimar – but I do agree with the good doc that inflation is coming. A non-existent force in general in recent years (things like college tuition and health insurance notwithstanding), the reemergence of this powerful force will have broad ramifications on our lifestyle and investment portfolios. It’s worth paying attention to.

As we head towards the end of February, I am also paying attention to the coming of spring with great anticipation, as well as the continued rollout of the vaccine. With two more vaccines likely to be approved in the next couple weeks, let’s keep your fingers crossed that we can get back to some sort of normalcy before too long.

On another note, in the “things we don’t look forward to with great anticipation” category, tax time is upon us. Your tax docs, with limited exceptions, have been issued by Fidelity. If you are having trouble accessing them or have any questions, please don’t hesitate to reach out. We’re here to help!