The market is wrestling with the sheer size of the numbers of new cases (which are growing quickly) and the second derivative that shows the most worrisome countries are starting to see a slowdown in the rate of infections. Compared to a couple weeks ago, the raw numbers seem staggering, but the chart of Italy seems to be showing that slowing rate. The numbers will still get worse, but remember that the market always tries to look 3-6 months in the future. Because this hit out of nowhere, the market had to quickly adjust to what the expectations are for a global slowdown – and quickly it did! Has that been factored in already? We think barring a financial system collapse, it largely has. Another interesting twist is the idea of an antibody test to see who might have already had the virus, had such small symptoms (or none at all) and are no longer able to be infected (so called herd immunity). That test is reportedly coming out soon. 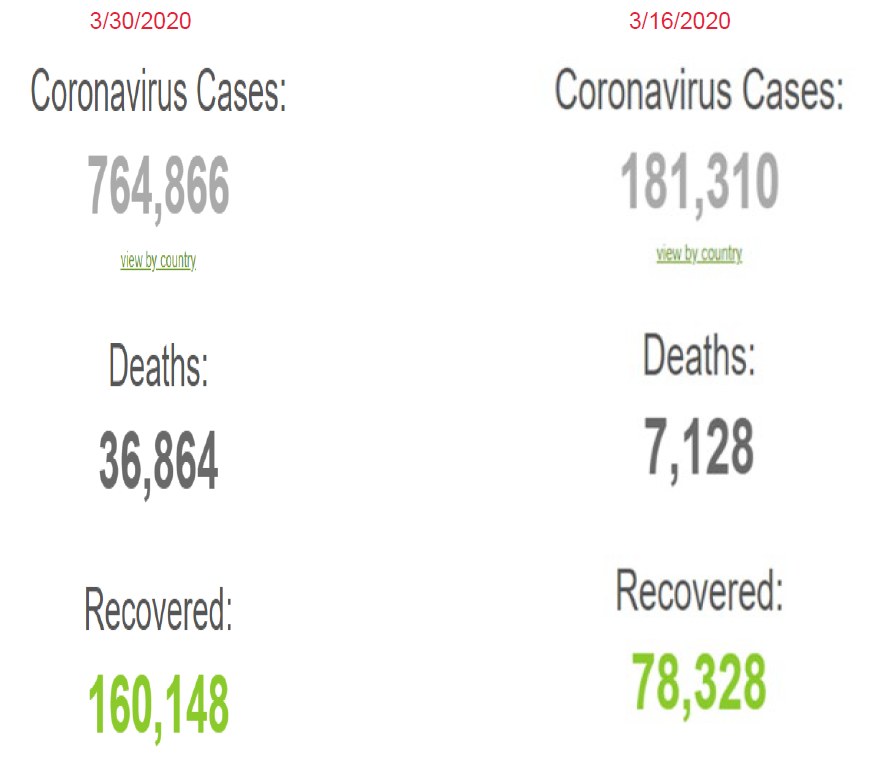 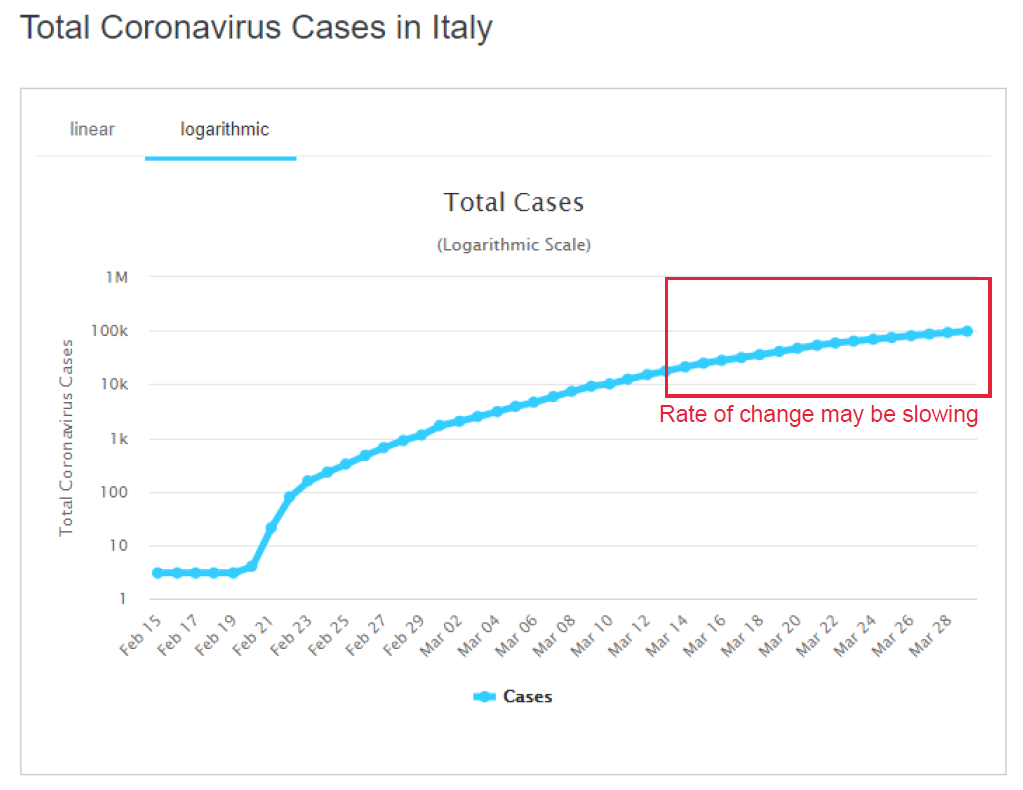 Let’s take a look at the market. As we mentioned before, the market was very oversold, which means it takes a lot of selling pressure to push it down further. We also said that we would look for that oversold level to be normalized to make more portfolio adjustments. If you look at the next chart, you can see that a large part of that oversold condition has been worked off. In fact, by some measures, we’ve already started a new bull market, which would mark the shortest bear market in history. We prefer to not get too caught up in bull/bear monikers, and instead look objectively at what’s next. 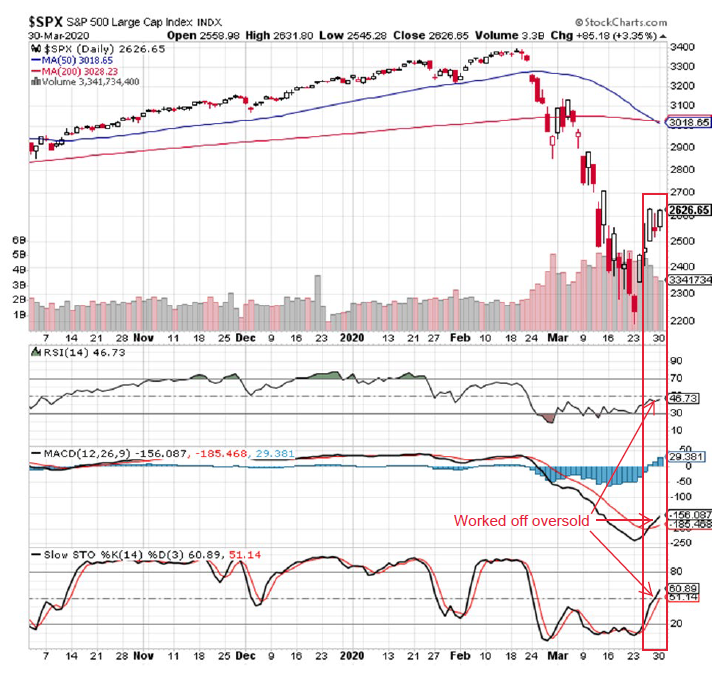 So where is it going next? The answer is nobody really knows for sure, but let’s see if we can form some educated opinions. One of the things we like to do is assign probabilities to outcomes, so that we can get a feel for symmetry of the outcomes. As I see it, there are three outcomes from here…Get ready to be impressed 😊.

If we put it another way, again, get ready to be impressed.

Some of our probabilities depend on what time period you are talking about. If I say 20 years, I think clearly the answer is the market will be higher. You would have to ignore all of history to believe otherwise.  If we talk about five years from now, I would say the odds are still that the markets will be higher than they are today. 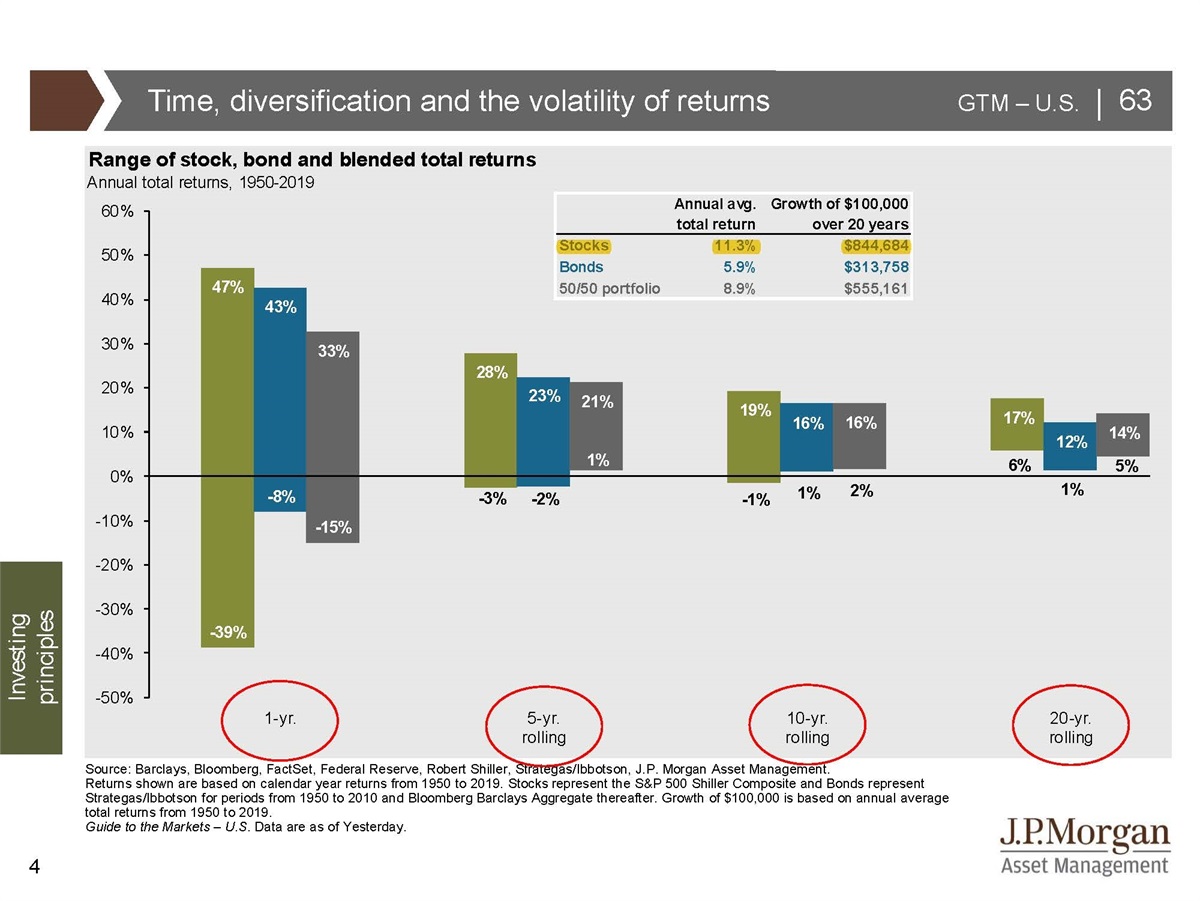 What about the next 12 months? Now things get a bit more difficult. I used to be offended when people would learn what I do and then equate investing to gambling. If I take a step back, and look at any one-year period, the odds are slightly better than 50/50 that the market is up over the next year. I could see where someone would say it’s like gambling. We would argue that if you are only “investing” for a one-year period, that it is actually not investing, and you are more speculating. The real difference, as I’ve learned over the years, between gambling and investing is this – the longer you are invested, the more likely you are to make money.The longer you gamble; the more likely you are to lose money. They seem very similar in very short periods of time but are the exact opposite over long periods of time. Anyhow, back to my probabilities.

As we look at the markets over the next year from where we sit now, we would say the markets are likely to be higher than where they are today. Of course, we can’t rule out that they could be lower out a year from now. Therein lies the dilemma - how to set the portfolio up to guard against downside but capture upside, while always keeping a view to the long-term? That’s easier said than done with what’s going on now. If we look at the slide below, you can see that we have only been this oversold five times since 1974. They all happened to be at major market bottoms. Might this continue to go down further? Maybe. 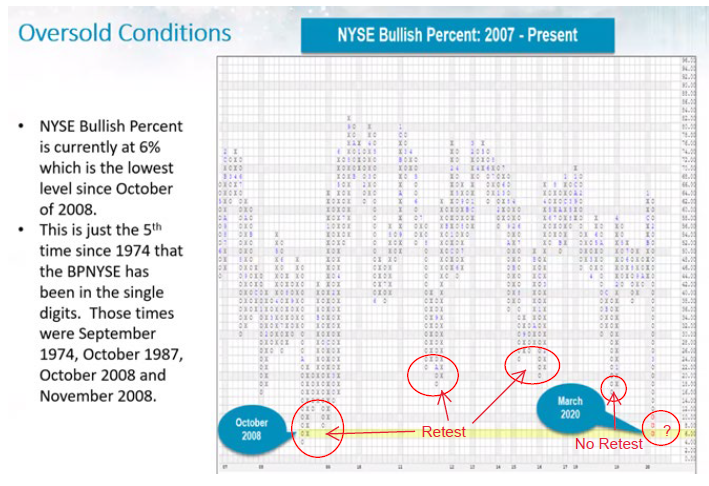 One way to view it is that this is forming a bottom and we are in the middle of a countertrend rally, which will then turn around and go back down to “test” the lows that were made last Monday. Assuming we hold there, we can get much more constructive on the market going forward. But let me point out a few things on the chart above. You can see that we have had three different almost 20% pullbacks since 2009, plus the one we’re in the middle of and 2008/09 bear market. Each of those pullbacks (except one) set a low and then retested those lows, in line with what we’ve seen every time such an event has happened in the post-WW2 era. In some cases, the lows weren’t broken and in other cases they were broken slightly, and all of them moved higher after the retest.

Now the one that didn’t retest was December of 2018, or did it? We saw a ‘V’ shaped recovery out of that one and we didn’t get a retest, at least in the near-term. If you remember what was going on back then (we wrote a lot about it at the time), the Federal Reserve was raising interest rates and shrinking its balance sheet by letting maturing bonds roll off and not buying new ones. Then Christmas Eve came, and we had the worst Christmas Eve in the market’s history. Amazingly enough, the FED changed their tune and started to talk about cutting rates and stopped shrinking its balance sheet.

Fast forward to today, the FED has just launched an open-ended bond buying program that will purchase bonds (“as much needed”) to keep the economy at full employment and stabilize prices. Boy have they got their work cut out. What’s interesting is the market has come back to “retest” that level from 2018. See the chart below and it’s amazing how precisely it has come back to probe these levels. Could this be the re-test that never materialized when history would have expected it to last year, marking the bottom from which we’ll now see a continued strong recovery? 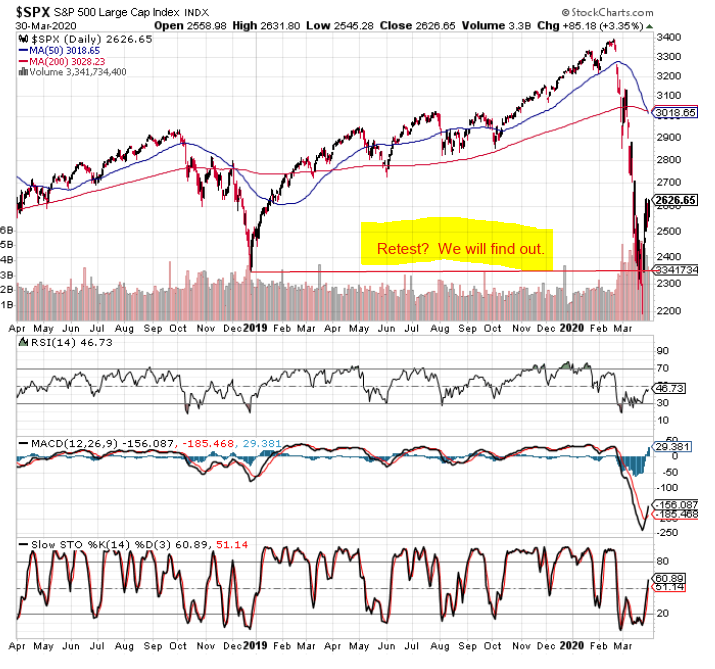 Here are how our probabilities look right now:

As you can see, the skew is asymmetric to the downside, which means the odds are not even and more protection is needed to the downside than participation to the upside. This of course is dependent upon how well health care workers and researchers respond to the COVID-19 virus and when we can all go back to work and start living our lives. I think the market may be starting to see some good news on the horizon in that respect, but only time will tell. For now, we still need to follow our process and protect in case the system does break down, although that seems less likely with the FED throwing an open-ended amount of money at the problem. Don’t even get me going on the future repercussions of that, we can discuss that in another blog.

For now, stay healthy and stay safe. Practice your social distancing, wash your hands often or use hand sanitizer, and limit touching your face (that’s a tough one for me, especially with my allergies). We will get through this and be stronger because of it. As a matter of fact, there are already statistics that show a positive effect of lower flu infections since we have started our cleaner habits.