Is Santa coming or has he already been here?

Yesterday was officially the shortest day of the year, which means, of course, the days will be getting longer for the next six months…and Santa will be coming in a few short days. Regarding the former, I think we’re all rejoicing, as a bit more light would do us all some good these days. In the meantime, I’ll make up for the lack of light with a heavy dose of charts. Apologies in advance…as I guess those aren’t equivalent in most books…though we do use charts to shed some light on the markets! When looking at these charts, the general theme is valuations are high, markets are overbought, and speculation is high. That is generally a bad combination. Coming back to today’s title and old St. Nick, our indicators are showing the jolly fellow may have already come down the market’s chimney, devoured the cookies, and moved on spread cheer elsewhere. Why do we say this? Keep reading and we’ll try to explain.

Let’s first answer the question that likely popped into your mind. Does what we just said mean the market will imminently crash? Probably not, unless we find some negative news on the vaccine front or the political outlook shifts dramatically after the Georgia runoffs. But you could, as I would expect, see the market take a breather in the near future (next few months or so). That being said, we still expect more fiscal and monetary spending and that will be the single biggest factor of market performance going forward, in our opinion.

As you know, that “free” money can’t go on forever, but we see it continuing for at least the next year or two. In our view, that will clearly lead to some inflation down the road (think 3-5 years from now). On that front, here is the chart of the 5yr/5yr-forward inflation expectations. You can see that expectations 5 years out have been rising, and rising inflation does have implications for the markets. We will come back to this chart over time to see how it is progressing.

We’ve shown the chart below several times. It is affectionately referred to as the “Buffett indicator” (not buffet…important distinction 😊). The reason being is that Warren Buffett considers this the best valuation metric for the economy and stock market. You can see that we are at new highs again…183%. This indicator measures the ratio of the total market cap of the stock market to gross domestic product (GDP). Perhaps we should call it the “all-you-can-eat buffet indicator” after all, at least at these levels! This is the reason that Buffett isn’t making any deals to buy companies and instead buying back his own shares. 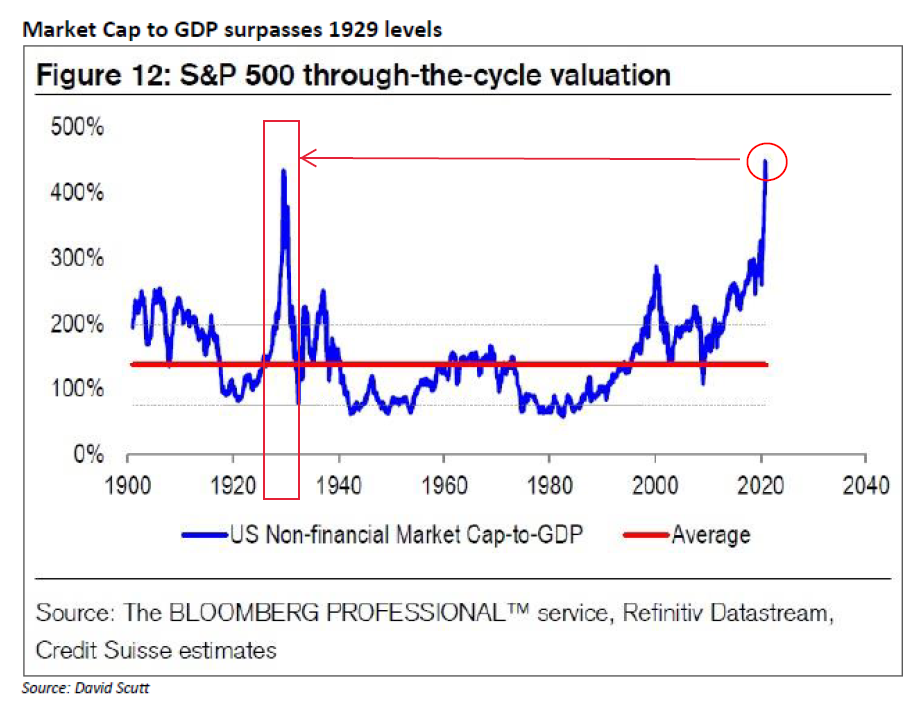 The next chart is looking at leveraged ETFs. This provides a very good view of speculation in the market, as these products are used to make amplified bets on an investor/trader’s view of the markets. The idea is the more buying on leverage, the more speculation. Typically, this marks the top of a market before some kind of pullback. Either a normal pullback or a more pronounced pullback. Either way, the market is speculative now. 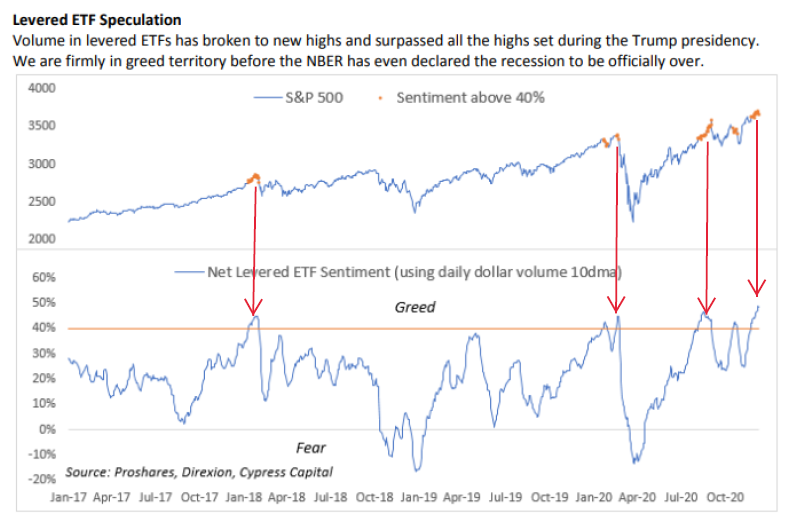 Analysts are at highs for target increases for stocks.  Mutual funds are also at historically low cash levels. 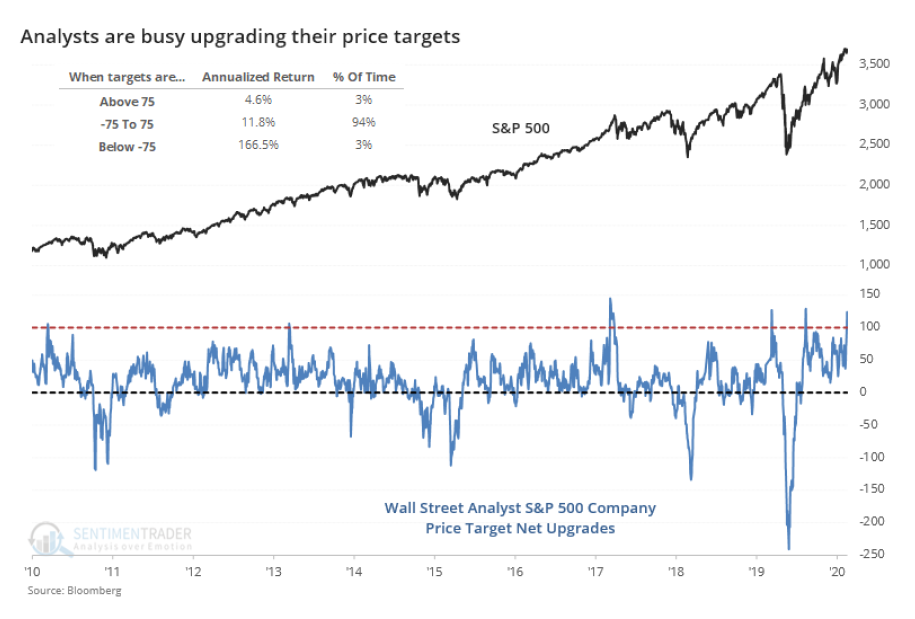 The chart below is the S&P 500, and you can clearly see the momentum indicators in the lower part of the chart starting to turn down. We are a good 15% from (above) the 200-day moving average, which historically would signal that we should we get a pullback over the next few months. 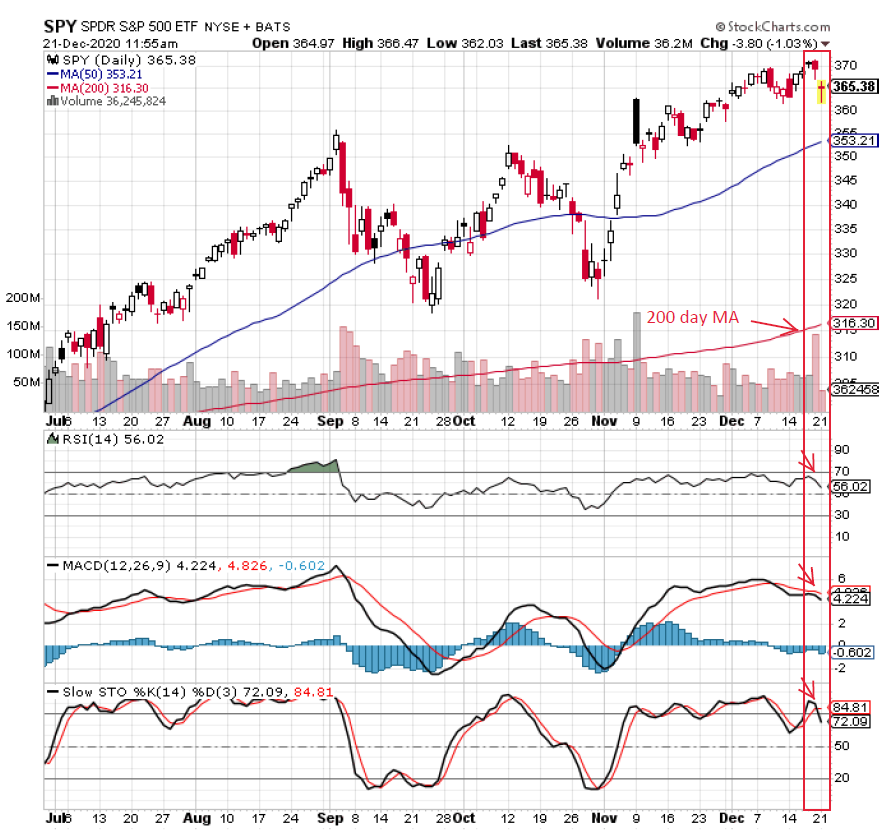 The chart below is where all the action has been. Innovation. As we have said before, we like innovation and you have benefited from that (in your portfolios, and in your daily life!). But like we always say, trees don’t grow to the sky. Put another way, you can’t sprint a marathon. When the ARK Innovation (ARKK) fund is up 150% for the year, I think you can call that a sprint. I think it would be perfectly healthy for it to take a break and catch its breath. You can see that it looks very extended on the chart, with the fund very much overbought. 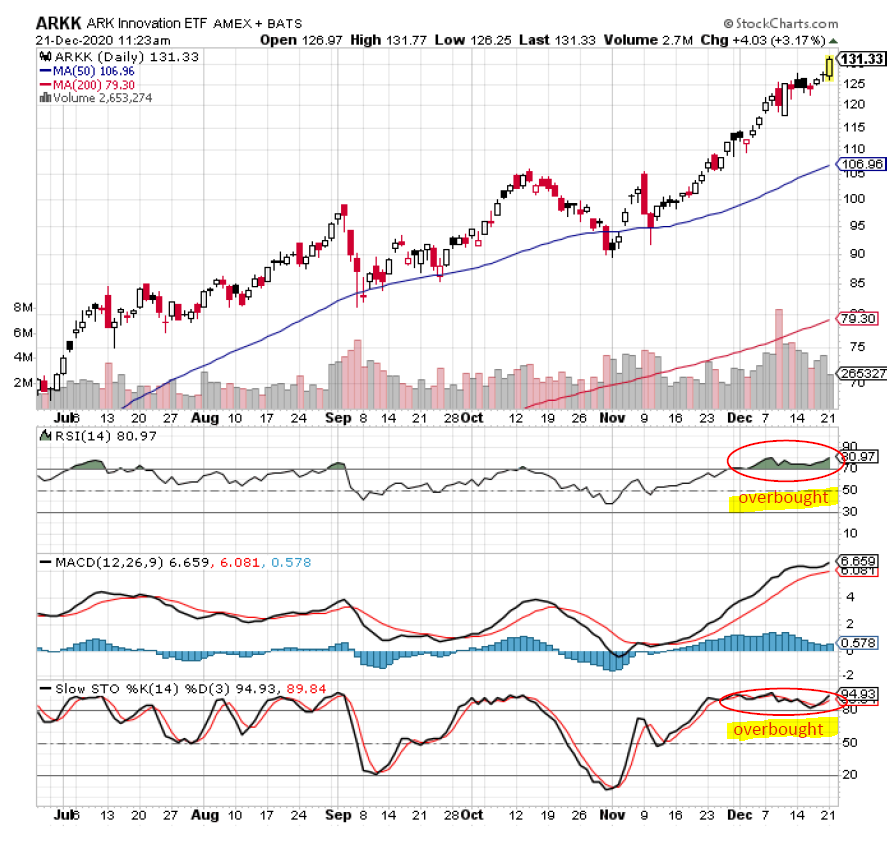 Let’s wrap this up. To reiterate, you’ve got a market that is fully valued (if not overvalued), with sentiment very bullish and speculation at high levels. That is a recipe for either a pause at the least or a more significant pullback to reset the market. Trying to counterbalance this…or perhaps just adding fuel to the speculative fire…is Congress throwing another $900B towards mitigating COVID-induced recessionary conditions and the FED maintaining an easing position with rates still low (although not as low as they were a few months ago). Put this together and you’ll see that things aren’t all in good order in this economy and these markets. To us, this calls for being somewhat defensive in the near-term, while maintaining a bullish long-term outlook that favors risk assets. No, it’s not time to stuff cash in that new mattress you’re getting for Christmas!

That being said, we would like to wish you and your family a very Merry Christmas. This year has dealt us all innumerable obstacles, and yet we all have a tremendous amount to remain grateful for. We hope this holiday season is providing you with plenty of opportunity to reflect on these blessings.

Lastly, in case you are wondering about our schedule as year-end approaches, suffice it to say “we’ll be here!” As much as I would like to believe that things will slow down over the next couple weeks, I’m going to guess that won’t happen. We will be here working hard all the way to the end of the year. As always, we welcome your comments and questions.